In this edition of Librarian Update:

I went to one of the local municipal libraries to observe reference librarians at work (for the other class I'm taking this semester) and encountered many incredibly talented and friendly librarians (some of which graciously spoke English with me). People are very friendly and patient here in Chisinau in general, but librarians here seem to go even above and beyond that standard. 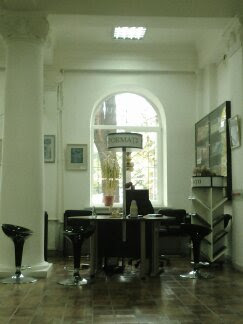 I participated in my first activity with the National Children's library a few days ago. It was part of a special national library event called "Night of the Library" where many libraries were open later than usual and had lots of special events (the municipal library was hosting a poetry slam, which sounded so awesome!).  I moderated a youth debate/discussion in English with about fifteen 12 year olds from a local English/Turkish school on the topic of Social Media.

You guys, I was completely blown away by how intelligent and talented these kids were. Not only were they speaking a foreign language fluently, they were constructing intelligent, complex thoughts on the role of social media in their lives. I highly doubt I could have done that in my native language at that age!

It was exhilarating to be up there with them, discussing the merits of social media vs. face to face interactions, and discussing ways to stay safe mentally and physically while still having a social media presence. It was also good to have an activity with kids at a library that weren't preschoolers. Don't get me wrong, I LOVED (I am tempted to put that word in 75 point font just to explain how much I mean it) being a storytime librarian--but it's precisely because I loved that so much that it was good to interact with an older crowd. I'm studying to be a children's and youth services librarian, and I had been wondering lately if I was actually interested in the "youth" part or if it was just the draw of storytime that made me interested in that emphasis.

Contrary to that idea, this activity made me realize how rewarding it will be to work with youth of all ages, in many different ways. These 12 year olds were kids still, sure, but in many ways they were also very grown up and it was a joy to interact with them. I was very pleased when the librarian I've been working with suggested to the group that we have a monthly discussion group, and that the kids enthusiastically agreed. I'm looking forward to meeting with them again, and I'm so grateful for experience that both makes me look forward to my future career, as well as makes me more prepared for it.

Loïe said…
Sounds like a fascinating experience! I'm glad you get to have more discussions in the future!
October 4, 2016 at 2:33 AM

Heather May said…
I am experiencing both age groups as well and it's amazing. I love the pictures and this is very exciting! What an opportunity Catherine! You're AMAZING!
October 5, 2016 at 2:05 AM