Last week we re-visited the Dendrarium, and this time we spent less time around the flowers and more around the lake. It was very peaceful to be in nature (something we don't get a lot of living in the city), and Jesse enjoyed pointing out various waterfowl to Nikolai (it might interest some of you to know that they have Mallard ducks here, but also wood ducks). 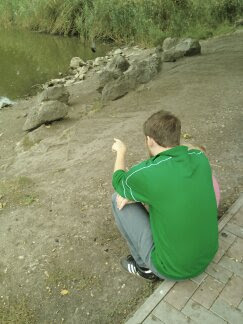 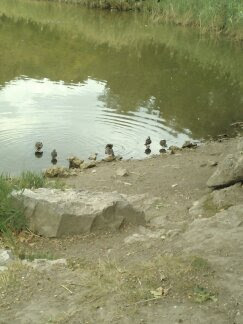 Just after taking the above photos, I felt something heavy land in my hair. Hoping it was an acorn (but fearing the worst), I put my hand to my hair, only to feel something wet on my fingers. Upon seeing my hand (which evidenced that the culprit had been eating purple berries), I may or may not have said a foul word, though I was quickly able to feel some levity in the situation. Once Jesse was informed of my plight, he kindly used a baby wipe to get out most of the mess. There are two morals to this story: 1) When possible, don't remain standing under a tree in which many pigeons are roosting 2) If you do happen to get pooped on, get you a man who will wipe that *ahem* stuff out for you.

Later that same afternoon, Miriam had a lovely time sliding down this super fast slide.  She is such a joyous little person and she brightens our lives.