Chisinau is the biggest city I've ever lived in, and it's a very different dynamic to live somewhere with so many people (Chisinau is about 700,000 people or so). One very noticeable difference is that there always seems to be something going on downtown, and because we live not that far from downtown, we can often hear the festivities through our open windows. There are many evenings where at 10 pm we'll be getting ready for bed, and we'll still hear music from some event or other going on. Instead of finding this annoying, I usually find it a charming reminder of living in a vibrant town full of life.

A few days ago, we heard music coming from downtown all day long, and after dinner decided to head on over to see what all the hullaballoo was for.

It turned out there was some kind of techno-color fest going on (sponsored by a local cell phone company), complete with ear-splittingly loud bass and colorful chalk to throw at each other. 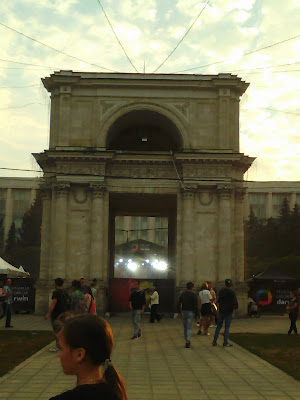 We didn't get in on the chalk action (I'm not sure the kids would have liked either it or the overly loud music) but it was fun to walk downtown and see TONS of people out enjoying it. I think there was also some sort of diversity festival going on (if we understood the Romanian signs correctly...) but most of that had wrapped up during the day, so we just saw them taking down banners. Either way, it was a pretty cool celebration! 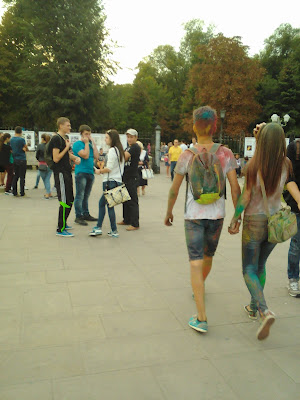 I think I took this picture that same evening--the sun setting over the square, with  the statue of Stefan cel Mare obscured by a sun flare. Sunset is already getting earlier here (it was at about 9 when we got here, but has been pushed back to around 7:50, just 4 weeks later!) and it was lovely to be out and about in the city with the sun's dying rays. 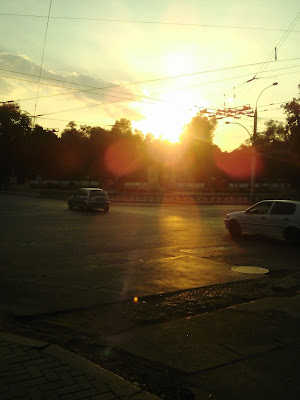 Alright, this is a little bit of a tangent, but a neat perk of living downtown is that we live next to tons of embassies from countries all over the world. We always pass in front of the British embassy, where there are tons of these concrete pillars. Nikolai has dubbed them "lasers," and usually tries to convince us that we need to run through them. See, even our kids enjoy the city! ;) 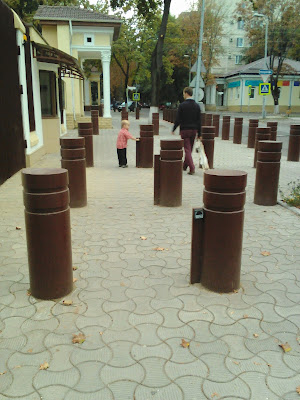 Maren said…
Embassies are so fun to look at. Big cities have such a vibrancy. I'm glad you guys are enjoying it. I wonder what time it will get dark in the peak of winter? (In China we lived in a city of 8 million and that was considered just a middle size population!)
September 24, 2016 at 1:40 AM

Loïe said…
How neat to have frequent festivities so close by! Glad to hear you enjoy Chisinau.
September 26, 2016 at 5:12 AM