I have been relieved on almost all of those fronts. Food isn't too expensive, local food is delicious, I've managed to make it through transactions to acquire groceries, we can find most of the things we need to cook the way we're used to, and Nikolai has...well, we're still working on that one.

So let's break some of that down! First, here's how to buy groceries in Moldova.

1) Enter the grocery store. If you're carrying a large bag, put it in a locker at the front of the store before getting a basket. Proceed through the little metal swing-gate to the produce section.

2) Find all your groceries! But be forewarned--don't get more than you can carry home! For us, this has meant sending Jesse to the grocery store on Saturdays with a large backpack to get most of our groceries, and then making 2 mid-week stops for milk, yogurt, bread and Russian cookies (we are addicted!).

3) Approach checkout warily. Refresh yourself of how to say important phrases in Romanian, namely "Excuse me, I don't understand," and "Repeat, please." DO NOT SKIP THIS STEP.

4) Place your items on the conveyor belt (and you will always have a million items, even though everyone else only has 2-3 items. When do these people buy the rest of their groceries!! I cannot figure it out).

5) The cashier will ask you in Romanian, "Do you need a sack?" Respond "Da" (conveniently the word for "yes" in both Romanian and Russian), and she'll scan a plastic grocery bag (they have barcodes on them) for you and then begin scanning your items.

6) This step is very important: DO NOT GET COMPLACENT! Just as soon as you start looking around, digging in your purse for your wallet or something, the cashier will ask you something in Romanian and you won't have been paying attention. Lucky for you, responding, "Excuse me, I don't understand" in your broken Romanian will usually get the cashier to repeat what they said, and this time your very limited Romanian-trained ears will pick up on the words "enough" "sack" "one or two." After a moment of feeling flustered, you'll realize that she's asking you if one sack is enough, or if you need two. Jubilantly hold up two fingers and butcher an attempt at saying the word "two" in Romanian.

7) After scanning all of your items, the cashier will tell you your total (which you won't understand, because it's in Romanian, but luckily there's a little screen with the numbers on it). Hold up your debit/credit card to let her know that's how you'll be paying (because trying to say it in Romanian is prohibitively difficult at present), then insert your card to pay. A few moments later, your receipt will print and you'll be out of there.

8) Pat yourself on the back. You did it! 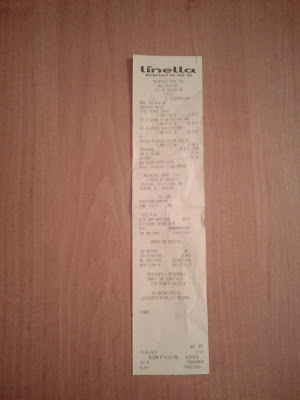 A receipt from our local grocery store, Linella

As for cooking, we've been able to make many of our recipes from home (though bringing out own cumin and chili powder helped, and we're going to be in trouble when our stash runs out!). It helps that we were already pretty used to making things from scratch, without relying on a lot of things like boxed mixes or canned soups. Sure, we can't find enchilada sauce, but we've found a spicy tomato sauce that's a decent replacement. We've been about to find good (though pricey) tortillas, and rice and pasta and beans are blissfully the same almost anywhere.

One welcome difference came when we made buttermilk pancakes. The only buttermilk-type thing Jesse could find was called "soured milk," which sounded right but also made us a bit wary. We went ahead and used it, figuring we could always make plain pancakes if it turned out terrible (that's basically been our practice for finding substitutes here--go ahead and try it, and make something else if it's terrible!).

Far from being terrible, the pancakes turned out GIANT and fluffy and delicious! 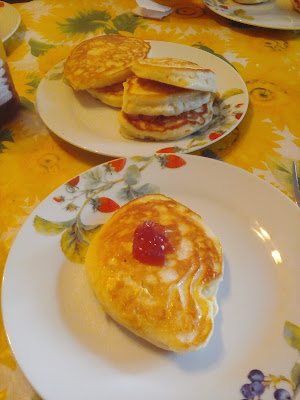 We don't have syrup here so we use jam, which, as it turns out we use tons of, because it is also our peanut butter substitute.

Jesse has done most of the transactions here that required ordering things, because everyone speaks Russian. It's honestly been a bit frustrating to not be able to be self-sufficient in that regard, so the other day I had Jesse teach me to order some ice cream. I approached the cashier to order, and bless her heart, she smiled bemusedly at my broken Russian instead of grimacing or scowling. A few awkward sentences later, I had procured the ice cream pictured below. Huzzah! 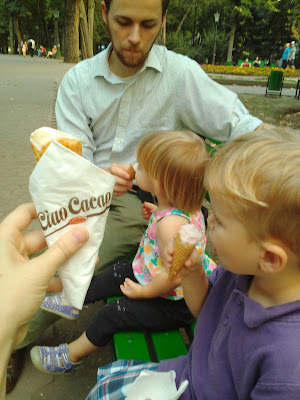 Finally, speaking of food one last time: Our landlady came by the other day to check on some things, and while she was here she pulled a few toys for the kids out of storage. One of them was this little toy kitchen. I remembered that I had seen some cheap plastic play food at the grocery store, and went to get it that afternoon.

The play food was funny--yellow plastic strawberries, pink bananas, and green chicken, with cups and plates that had stickers on them saying things like "Interesting." 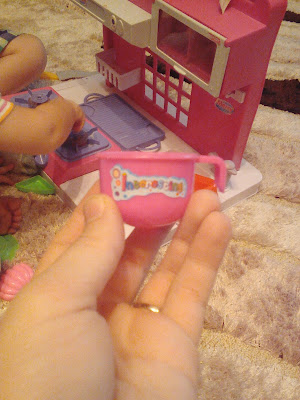 They matched the kitchen well though, which had stickers on it saying "Wonderfu." 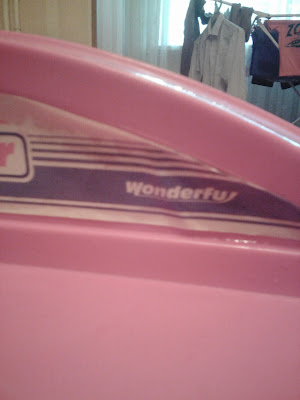 Maren said…
Good for you for making the effort to speak. I know how easy it can be to rely on the spouse to do all the talking. I love hearing about your day to day things like this. I hope you find lots of food that Nikolai likes. We would definitely have the same issue with R. And those pancakes, wow!
September 25, 2016 at 1:28 AM

Loïe said…
I'm proud of you for ordering that ice cream in Russian! :) That should really come in handy since you love the ice cream there. Have you picked up any fun Romanian words?
September 26, 2016 at 5:09 AM

ps when i don't have buttermilk* (*i never ever have buttermilk) i put a tablespoon of vinegar in my milk. and that's what works, but sounds like soured milk is even better. ;)
September 27, 2016 at 12:55 PM

julis said…
I so appreciate the "typical trip to the grocery store" list! And the pictures, always. I have a vague memory of Jesse liking something sour cream-ish when he was in St. Petersburg. I wonder if that was similar to your sour milk? I remain in awe of your courage and stamina. Go Catherine! (& yay for ice cream)
September 29, 2016 at 10:55 PM