Last week, Moldova celebrated its National Language day, commemorating the day in 1991 when the country declared its national language to be Moldovan* (changed a few years later to Romanian). To celebrate, they had a day of programs and music in the city center, and we trekked on over to check it out.

*In reality, "Moldovan" was just something made up by the Soviets, who wanted to separate Moldova from Romania and decided they needed their own language to justify the separation. "Moldovan" was basically the same as Romanian, but written with the Cyrillic alphabet.

Before listening to the music, we had to get some placinte again, because seriously those things are delicious. Niko ate a little bit (we're dealing with some pretty major pickiness these days) and then ran around, making Miri laugh:

The actual music was great, with dancers performing traditional folk dances onstage. Sometimes, people in the audience would join hands in a circle and dance too. Miriam, resident music lover, danced around with one tiny hand waving in the air.


As we headed towards home, I noticed that Stefan cel Mare (Stefan the great) looked particularly great backlit by the setting sun and with Moldovan flags stretched out behind him: 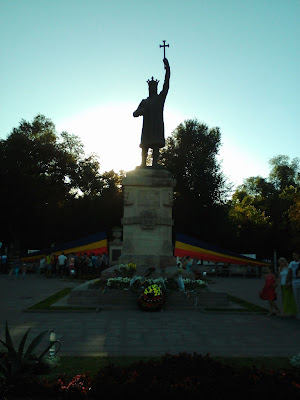 And then, obviously, we stopped for ice cream on the way home. The pepene gelben (cantaloupe) is still the best flavor ever. I think I've tried enough other flavors now (including Mascarpone) to justify only ever getting pepene gelben and not feeling guilty for not branching out. 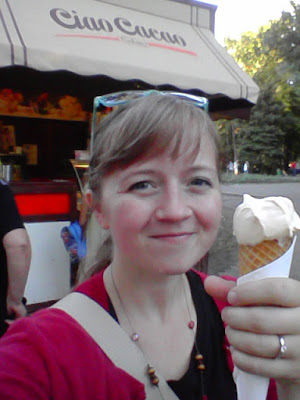 Speaking of languages, Jesse and I have been doing a Romanian audio course, and I've started doing Duolingo for Russian (since apparently I could get by speaking just Russian here). It's a little weird to be learning two languages at once (and neither of them are like the other two languages I've spent time learning, German and Japanese).

Today, on the way to pick Niko up from preschool, I rehearsed in my head what I might say to the receptionist or his teacher (Jesse has picked him up all this week so it was my first time). As I tried to remember how to say "Excuse me, where is Nikolai?" or "Sorry, I don't understand," all of the languages EXCEPT Romanian kept popping into my head (and for some reason it was mostly Japanese, which I haven't used in 7 years). Despite the confusion, it was still an interesting feeling to know that I had my pockets full of all these different languages. 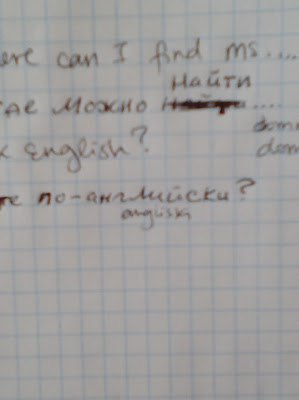 And speaking of learning Russian, I had Jesse write out some phrases that I might need when I go to interview some librarians tomorrow (they speak English but I will need to navigate to their offices, and I still understand more Russian than Romanian). He started by writing in cursive instead of in print, and unfortunately Russian cursive is basically just all squiggles (as evidenced above). A few questions of clarification later, I could read his writing (and will hopefully be able to find my librarians tomorrow. Wish me luck!).

ivrcti said…
Thank you sooo much for blogging! It means the world to us! I really appreciate the music in particular. As for language, I don't see how you learn two at once, I would forever be using the wrong word in the other language!
September 8, 2016 at 3:14 PM

Maren said…
You are amazing! I appreciate the explanation of Moldovan, I have wondered about that. And I 100% believe in sticking with a tried and true flavor of ice cream above all others. :)
September 8, 2016 at 5:39 PM