I know it's not a holiday for most of you, but it is here! Niko had no school and Jesse had no work, so I did enough homework to get by and then called it a holiday too.

By about 10 am the kids were bouncing off the walls so we took them to the park. I was holding Niko's hand and Miri kept insisting "Mama hand! Mama hand!" (despite the fact that her father had two perfectly good hands) so I ended up towing both kids. It's really, really sweet, but it's also a bit like being a tugboat--both kids need quite a bit of tugging to keep them going. 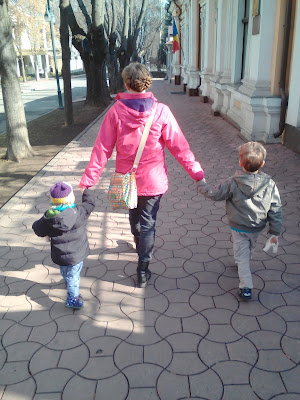 I call this photo, "Two out of two kids prefer "Mama hand.""

It was a really great morning--the kids were having a great time and the weather was in the upper 50s. Despite this, all of the children at the park were still wearing coats and hats, except Niko (who didn't want to wear his hat, and frankly didn't need to). When we saw another child not wearing a hat, he turned out to randomly be American too! 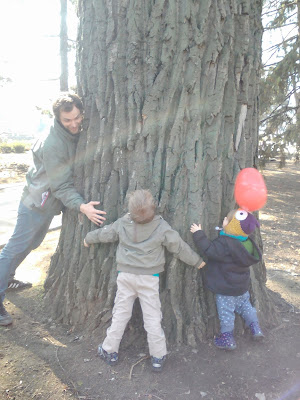 This tree was GIANT!

The kids are unevenly matched for the see-saw but they love it, so we help them out:

After we had been at the park for a bit, a carousel off to the side of the playground starting playing the kid-equivalent of the kind of pop that's really popular here, and Miriam dropped everything and started dancing:

After the playground, we spent awhile walking around in the sunshine (and remembering what it felt like!) 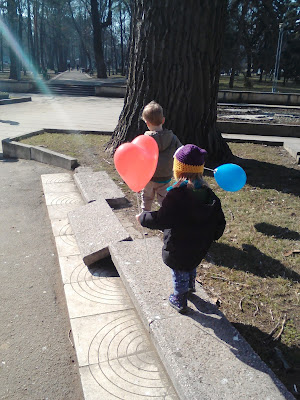 Speaking of sunshine: Though I've lived many places that were very cold, sunless and fairly dreary in the winter, this is the first winter where I've really felt like I experienced Seasonal Affective Disorder (basically seasonal depression). Like many forms of depression, I didn't realize until it was over. Spring started creeping in here, with fresh breezes and more sunshine, and suddenly I felt like I was ALIVE again. Honestly, it was a little scary how good I felt when spring started--I thought to myself, "WOAH, I feel AMAZING! But this isn't sustainable!" It felt a little manic, to be honest. But that feeling subsided and now my brain is back to feeling a realistic sort of good, but with way more optimism than I was able to muster through the winter.

I don't think it's that I don't like winter (I love it!) but not seeing the sunlight was not good for my brain this winter, especially given some of my circumstances this winter (not speaking the language, trying to learn it to get better but anxiety making it difficult to practice, etc). But it's been good for me to realize that SAD is likely what I was experiencing, so I can look out for it in the future. 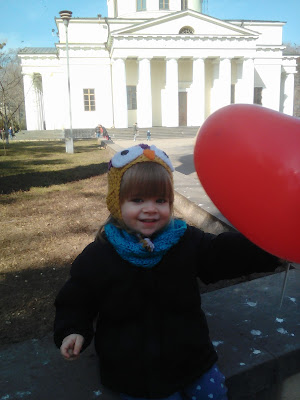 Back to the park! 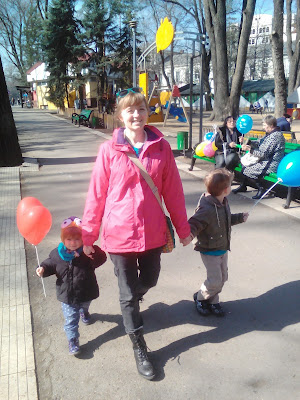 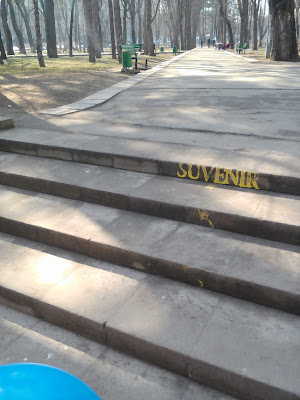 I love this "Suvenir" graffiti 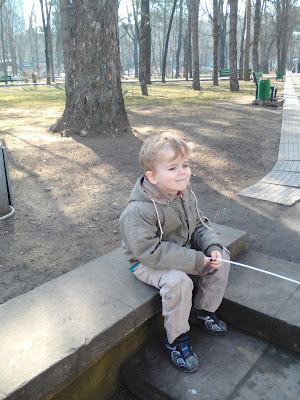 Basically, we tried to make it a perfect morning for the kids--buying balloons (which 97% of the time we say no to) and even going to McDonalds (Niko's favorite mixture of food and consumerism) after all our wandering. 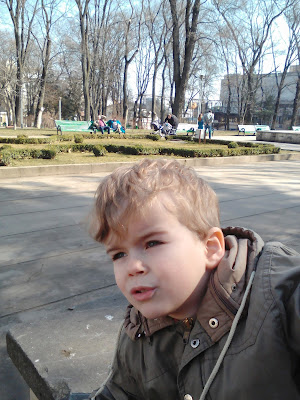 In the middle of saying something 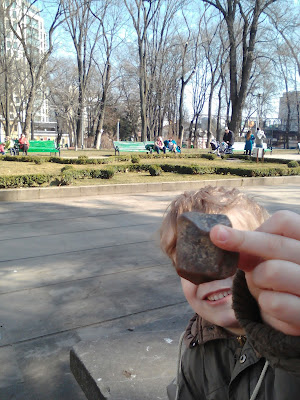 And in the end, it ended up being a pretty perfect morning for us too.

melissa said…
You know, McDs gets a bad rap--by people like me in fact--but it's nice to know that all over the world, even if you're struggling to know the language and everything is strange, you can get some good ol McD. Even if it's different there. Is it different?
March 9, 2017 at 9:40 PM