Twice a year, Niko's preschool class puts on a little performance of poetry, songs and dances to show off what they've been working on for the last few months. This time, they recorded all the performances and sent them to us, and I'm posting them here to share with all of you!

They're all in Russian, but don't worry--we can't understand them either 😉

Their performance coincided with the celebration of the start of spring as well as Women's day, so most of the songs are either about springtime or about moms or grandmas.

Also, the glamorous blonde is Nikolai's incredible teacher Veronika (pronounced "Vehr-oh-nee-kah") (and yes, every Moldovan woman I've met looks normal most days but also knows how to suddenly become incredible glamorous on a moment's notice. It's a skill!). Veronika only speaks Russian and Romanian and my Russian is getting better but still spotty, so we have this awesome relationship where she tries to tell me things about Nikolai and I sort of understand, and if it's really important she just messages Jesse. Ah, such is our life!

For Women's Day (which is sort of celebrated as mother's day here), they had the kids make these adorable little cards to the moms, and the kids wrote "I love you mom" inside in Russian. I have mine hanging up on the wall here and I love it so much. 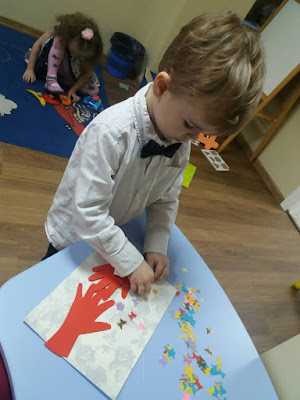 Ok, back to the adorable videos!

I don't know the woman who teaches them the dances, but she is incredible. She got ten 4-5 year olds to reliably do some choreography!

(Also, in this video Nikolai is on the back left corner, until the middle when he runs to the front back corner.)

I love this next one because the little nonsense song is one my mom always sang with me as a kid and I've sung it to the kids since they were itty bitty. I've never heard it anywhere except from my mom, and now, from this random music track in Moldova!

(Niko's on the second to left in this one, and the kid in the red on his left cracks me up!)

This song is about how much the kids love their grandmas.

BUT funny story, Nikolai didn't understand the word "Babushka" and so when they were practicing this song at school he said "I don't have a Babushka." Ha! Bless his heart, when we watched the video together and I told him what Babushka meant he was mortified. I told him I'm pretty sure his teacher knew he didn't understand!

Also, in case you were wondering if kids shout-singing is universal, this video proves that it is!

(Niko is on the second to left here)

Finally, here's a poem Niko memorized, dedicated to his mama. There was another recording of this in his fancy clothes, but the audio in this one is better so I included it. I can actually understand some of this one! Basically, he says that he loves his mom more than flowers and candy and loves to spend time with her. So sweet!

It's so fun to see what they've been working on at school and to have these videos! I love watching him dance and sing so much, and I know I'm going to really love watching these in the future when he's not so small anymore!

ivrcti said…
These were fantastic! It's funny to see him speaking a language we don't understand. I guess I didn't expect that as a grandpa!
March 10, 2017 at 7:04 PM