To celebrate, the city shut down a large stretch of the main boulevard for the day, and vendors from all corners of the city set up shop all along the road. They also had stretches of the road marked off to represent different neighborhoods in the city, using these really cool gates to demarcate each area. The gate below was the entrance to the Botanica section: 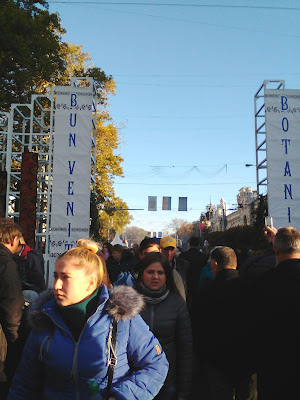 It was COMPLETELY PACKED (I think all 700,000 residents of Chisinau were there) and I have never been in one place with so many people. It was simultaneously thrilling and overwhelming.

We walked for awhile, checking out the sights and seeing if there was anything to buy (I eventually bought a mustard yellow sweater that I fell in love with, as well as a counted cross stitch pattern that was incredibly cheap. I'll post photos of them soon!). There was so much cool stuff and I'm sure we could have wandered for hours, but our little people were in need of sustenance so we had to call it quits. Jesse and I picked one of the dozens of shashliki vendors (basically delicious shishkebabs) and were very satisfied, though we caved and bought Nikolai McDonalds. After braving an "Oh no, I have to go potty!" scare (the bane of every parent's existence, but a pretty difficult one to deal with in a country where free public restrooms aren't common), we wound up our adventure and headed home.

The sun was in the process of setting and they turned on this lovely net of lights over Stefan cel Mare boulevard, where a concert was beginning to get underway. Part of me wished we could stay longer, if only to absorb more of the exciting atmosphere. The other part of me realized we were all pretty chilly (especially Miri, who was in the stroller and didn't move around enough to warm up), and that my introvert self had honestly had enough for the day. But either way, I was really glad to live in such a cool city. 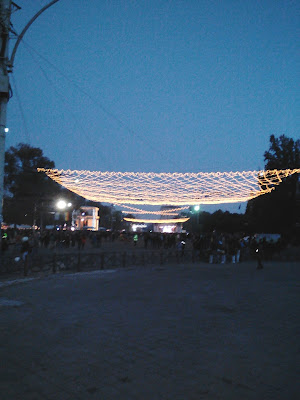 I'll leave you with a picture of silly Miri, putting the balloon stick in her mouth as we headed home: 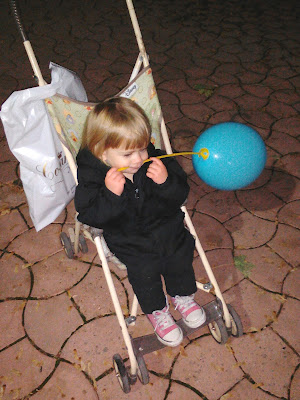 Maren said…
That sounds so fun! I'd forgotten about Europe's lack of free public restrooms. Do even the McDonalds and such make you pay? That would be so hard with small kids. I love that picture with all the lights.
October 16, 2016 at 4:12 AM

Catherine said…
The McDonalds just requires you to be a customer, and luckily we had bought Nikolai some McDonald's earlier in the evening so it was ok. But Jesse had to put Niko on his shoulders and run a block and a half over there (praying the whole time that Niko had great bladder control and wouldn't pee on his shoulders)! We were racking our brains and couldn't think of anywhere else to take him!
October 16, 2016 at 2:48 PM