We went to the falls first thing we arrived, and you guys! These things are no joke!

We also severely underestimated how frozen they'd be in March. Case in point: these pictures from the viewing spots down below the falls--they were almost covered in ice and snow! 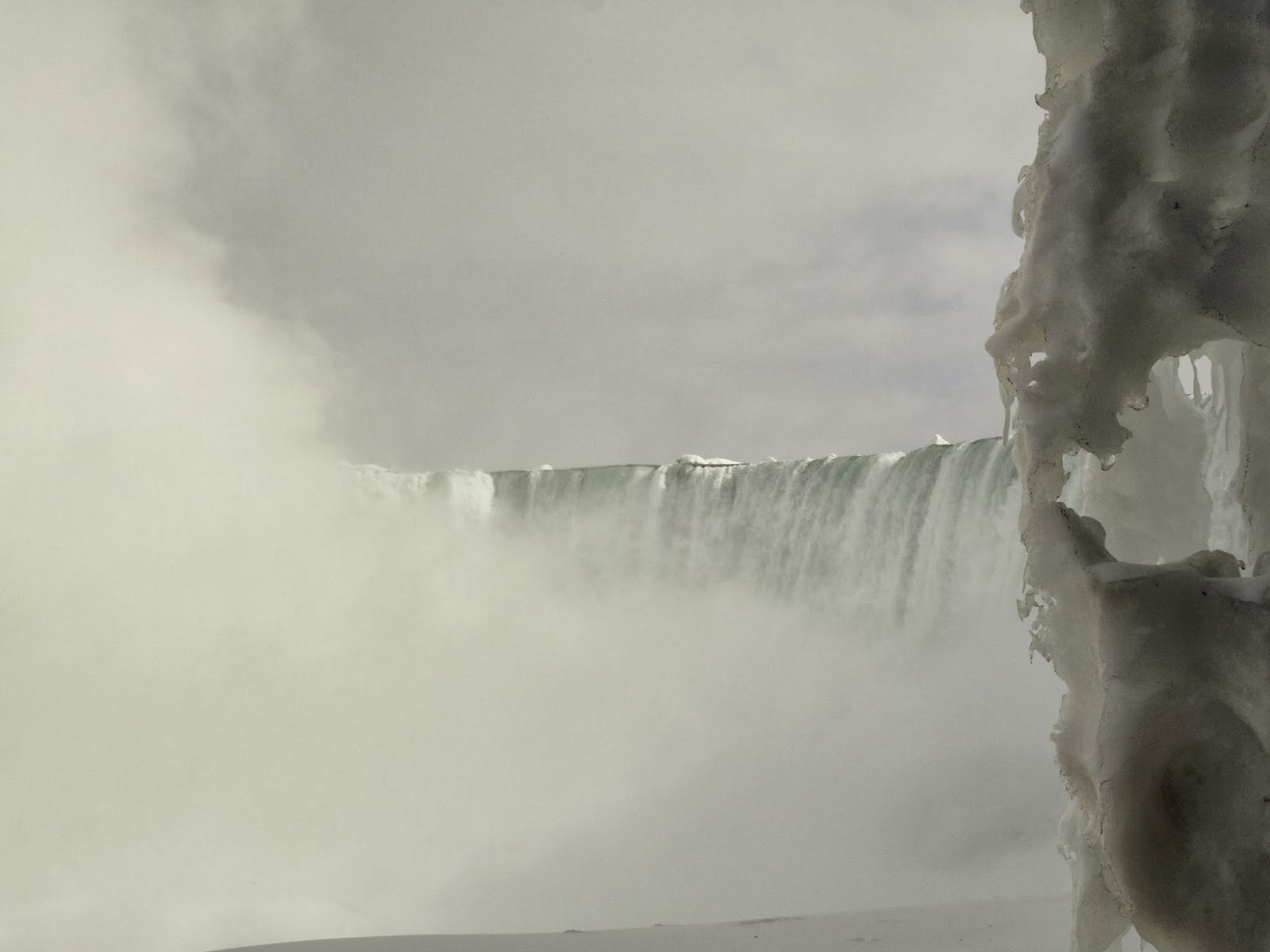 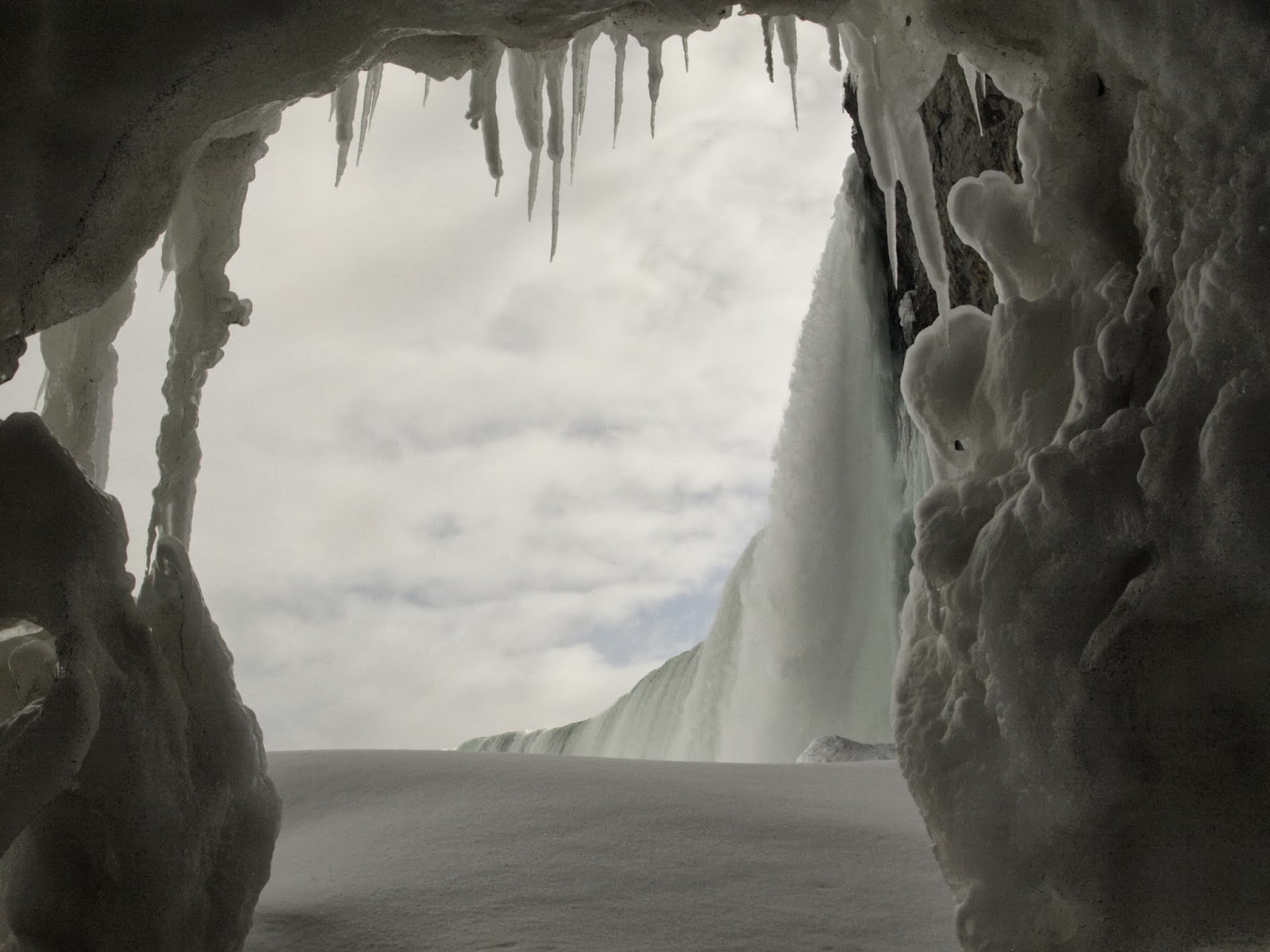 After a bit below, we went up top and took in the massiveness that is the falls. 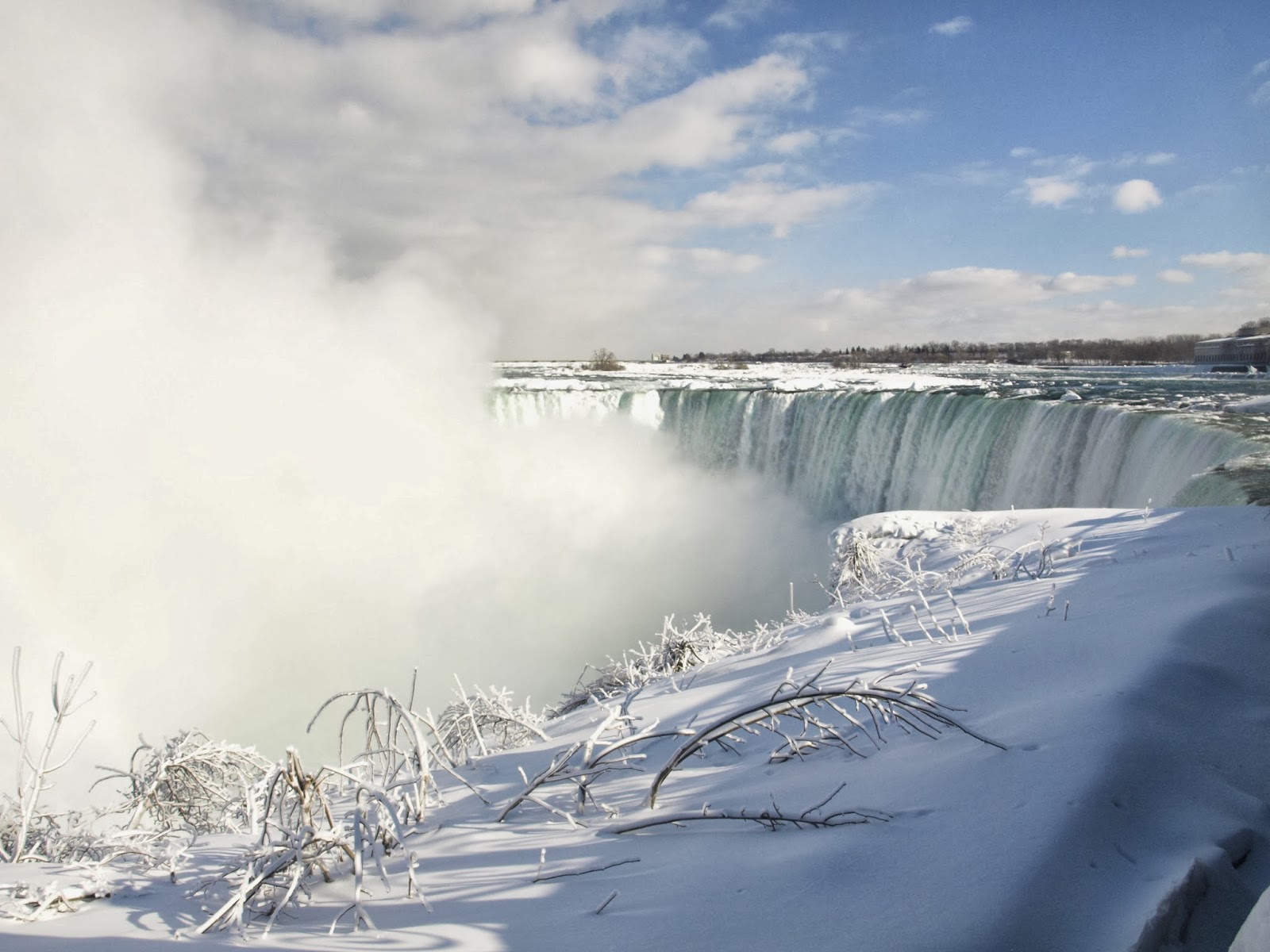 You might not be able to tell below, but we were all freezing--it was maybe 10 degrees out! But my boys stayed happy nonetheless :) 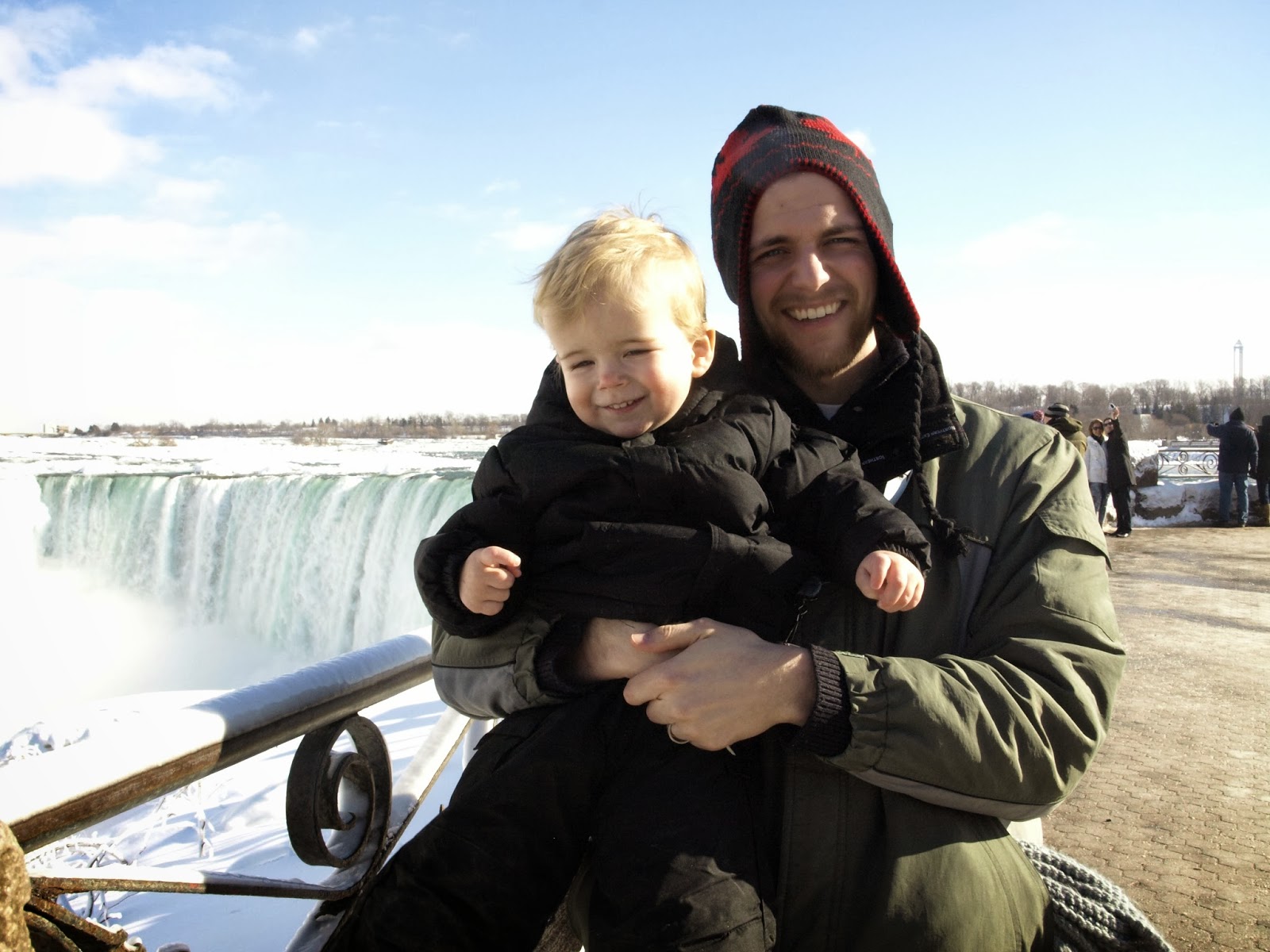 The first day we were there, there was TONS of mist created by the falls--can you see the rainbow too?? 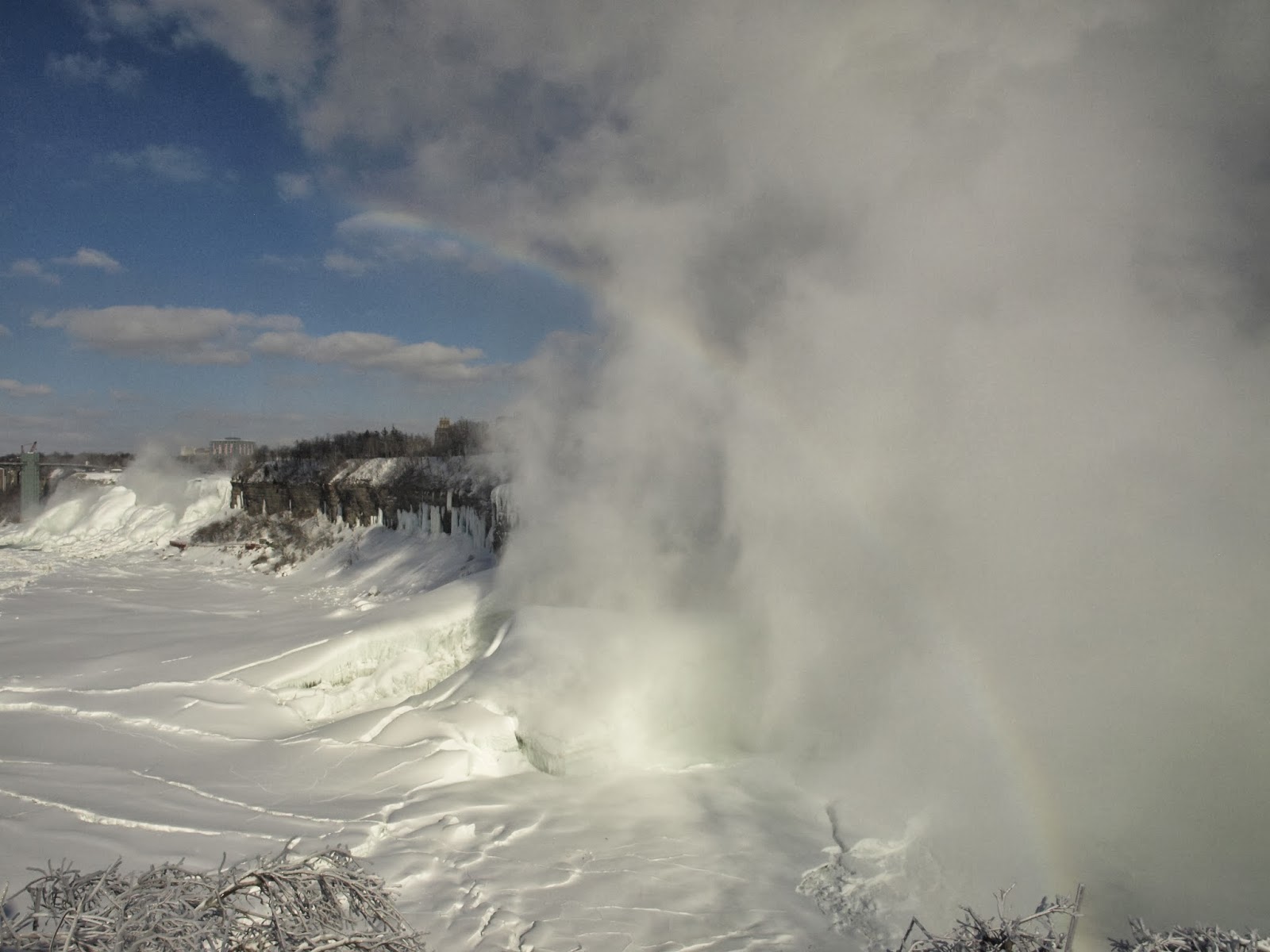 In preparation for going, I was planning all the stuff we wanted to do.  At first we really wanted to go on the Maid of the Mist ferry ride that takes you out close to the falls, but then I found out they don't run until April.  "April!" I thought to myself.  "How weird! Why don't they run earlier?"

Why, my friends?  Because this is where the Maid of the Mist docks. 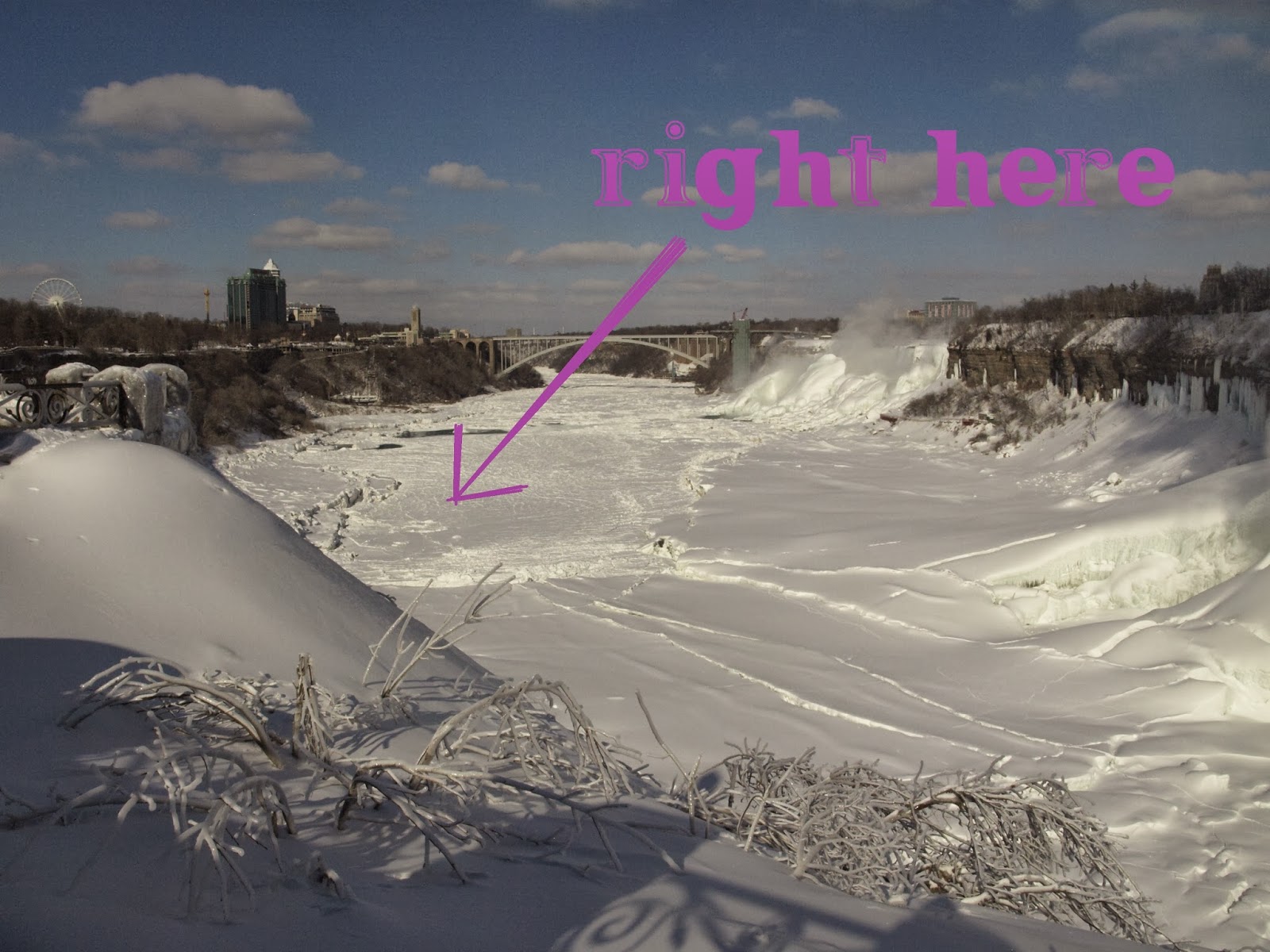 I don't think I really realized before coming that the whole river would be frozen!!! I mean, it's this huge mass of quickly moving water--that can't freeze, right?

Wrong.  Totally frozen.  And it was gorgeous! I don't think I have any good pictures of it, but the mist creates these "ice giants" just out from the falls that just rise up out of nowhere. I guess you can kiiinda see one at the bottom of the picture below: 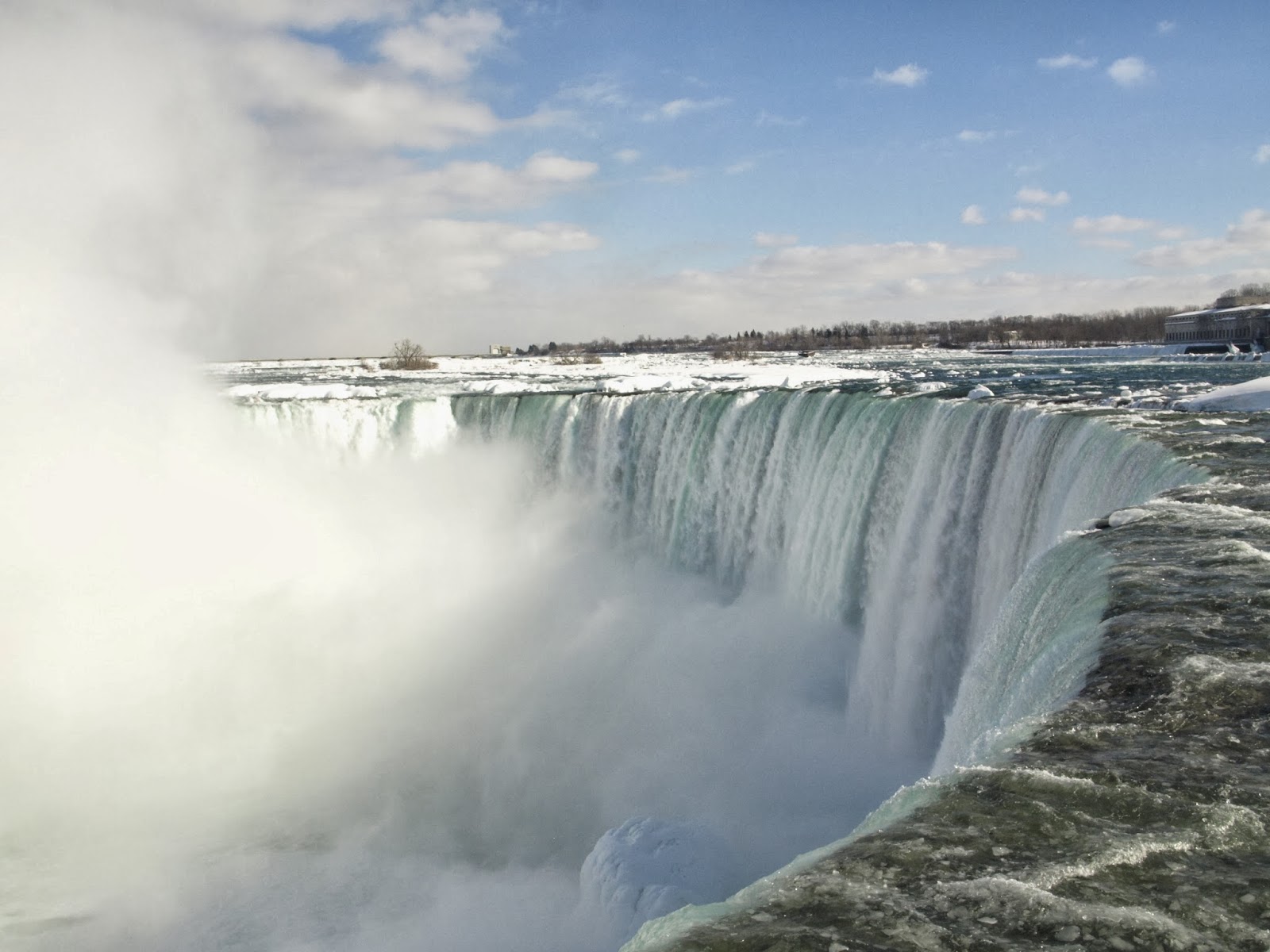 Also, in case you were thinking it might be fun to go over the falls in the winter, this is what the water looks like, plunging over the edge: 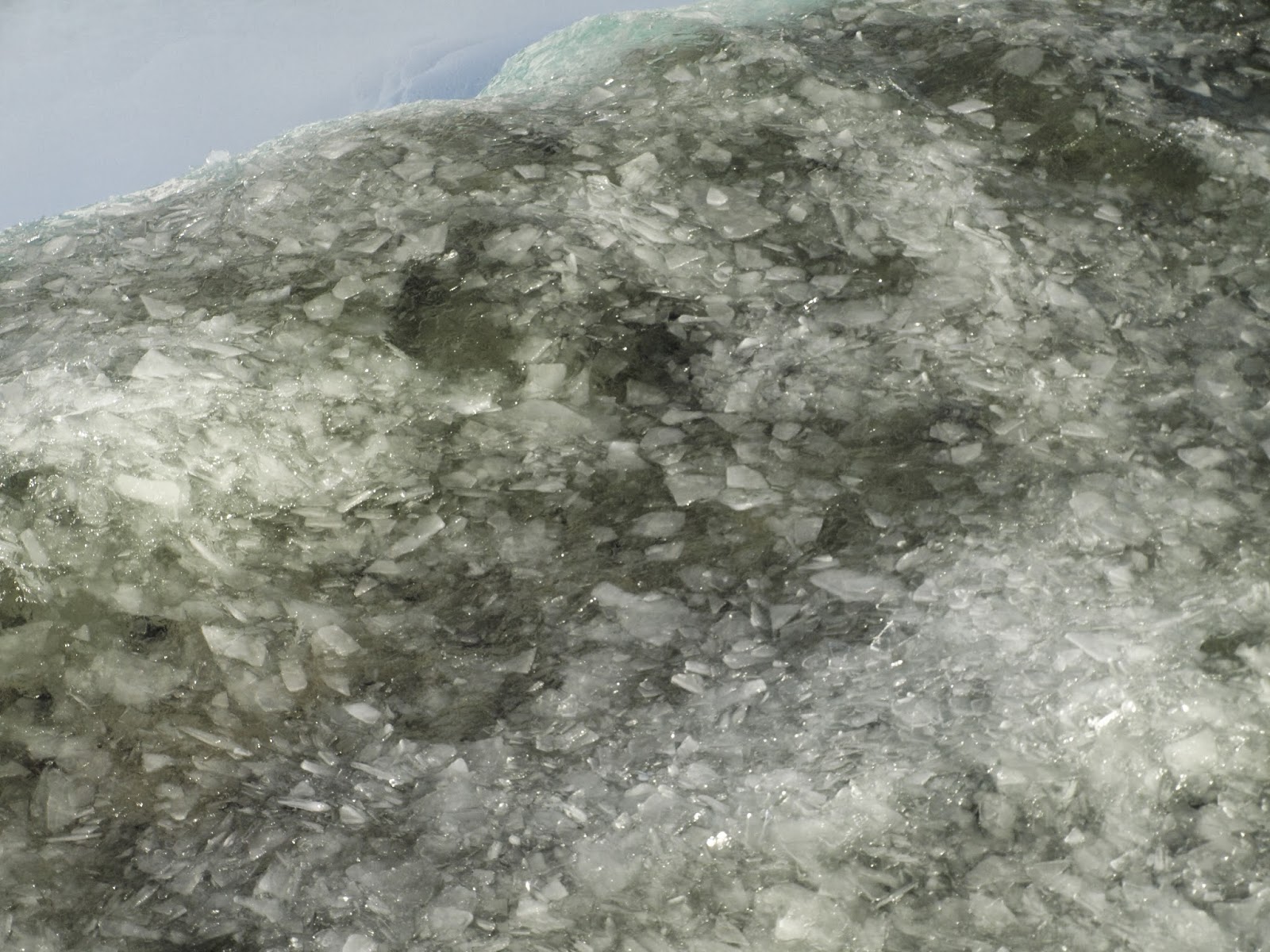 Totally full of ice chunks! But isn't that green-blue color so pretty?!

Also, photographic proof that I was there and enjoying myself: 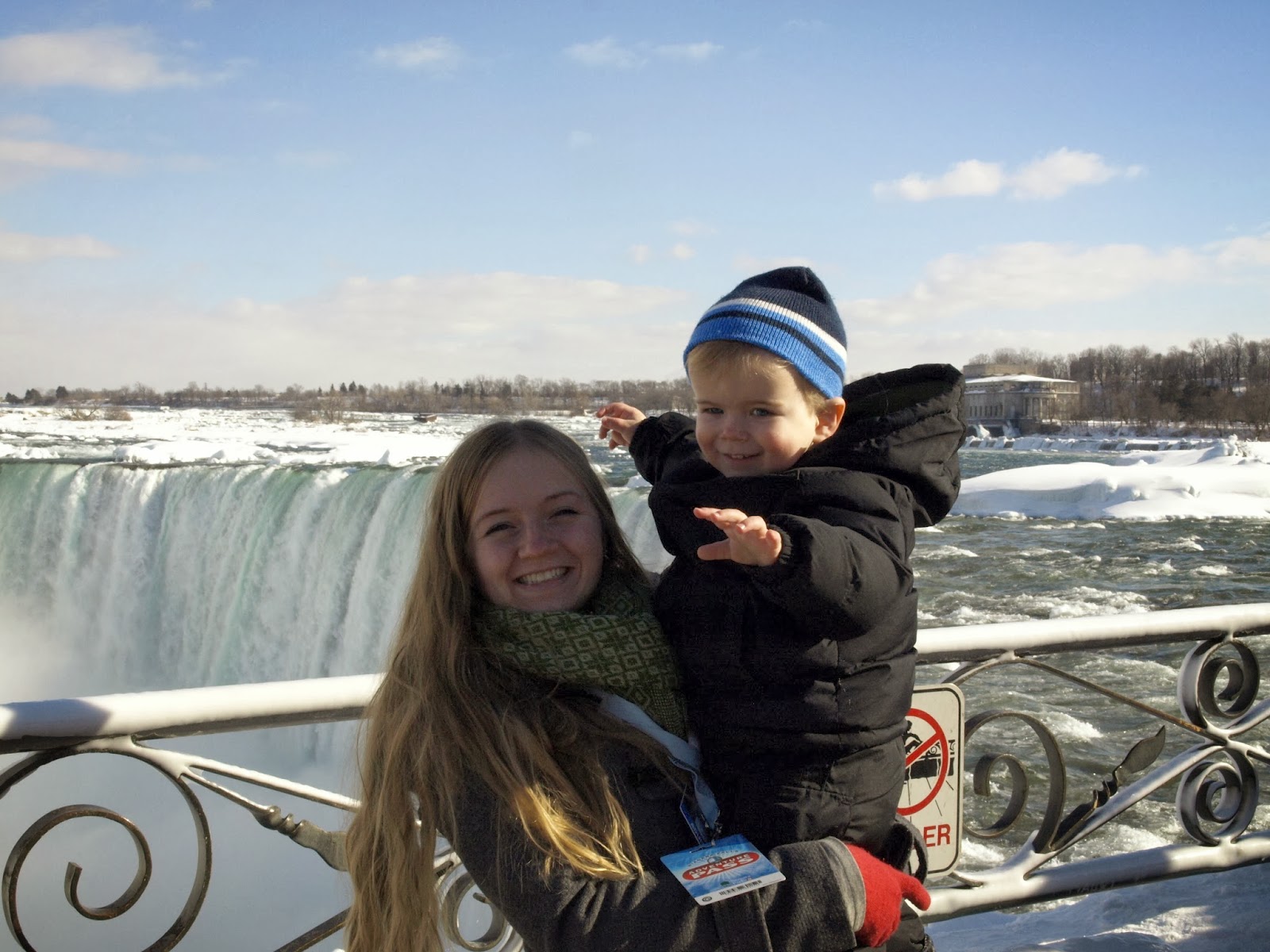 Random: they had these lovely iron railings up around the falls (for obvious reasons, I think) and the combination of snow falling on them/mist coating them/people leaning on them meant they were covered in a thick sheet of pretty white ice that was completely smooth: 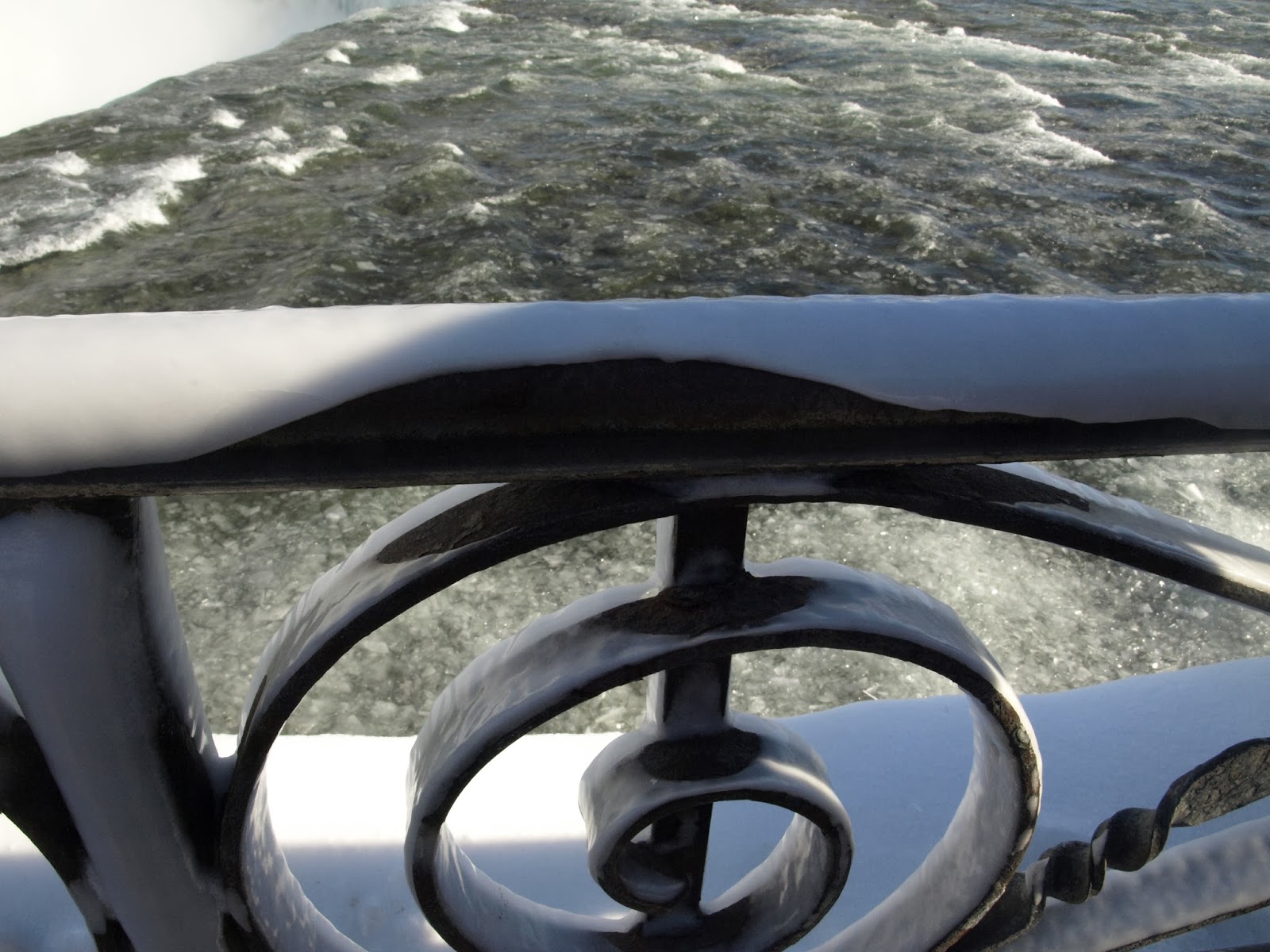 We loved seeing the falls up close! We stayed there as long as our cold toes could stand it, then passed these awesome mounties on our way back to the car: 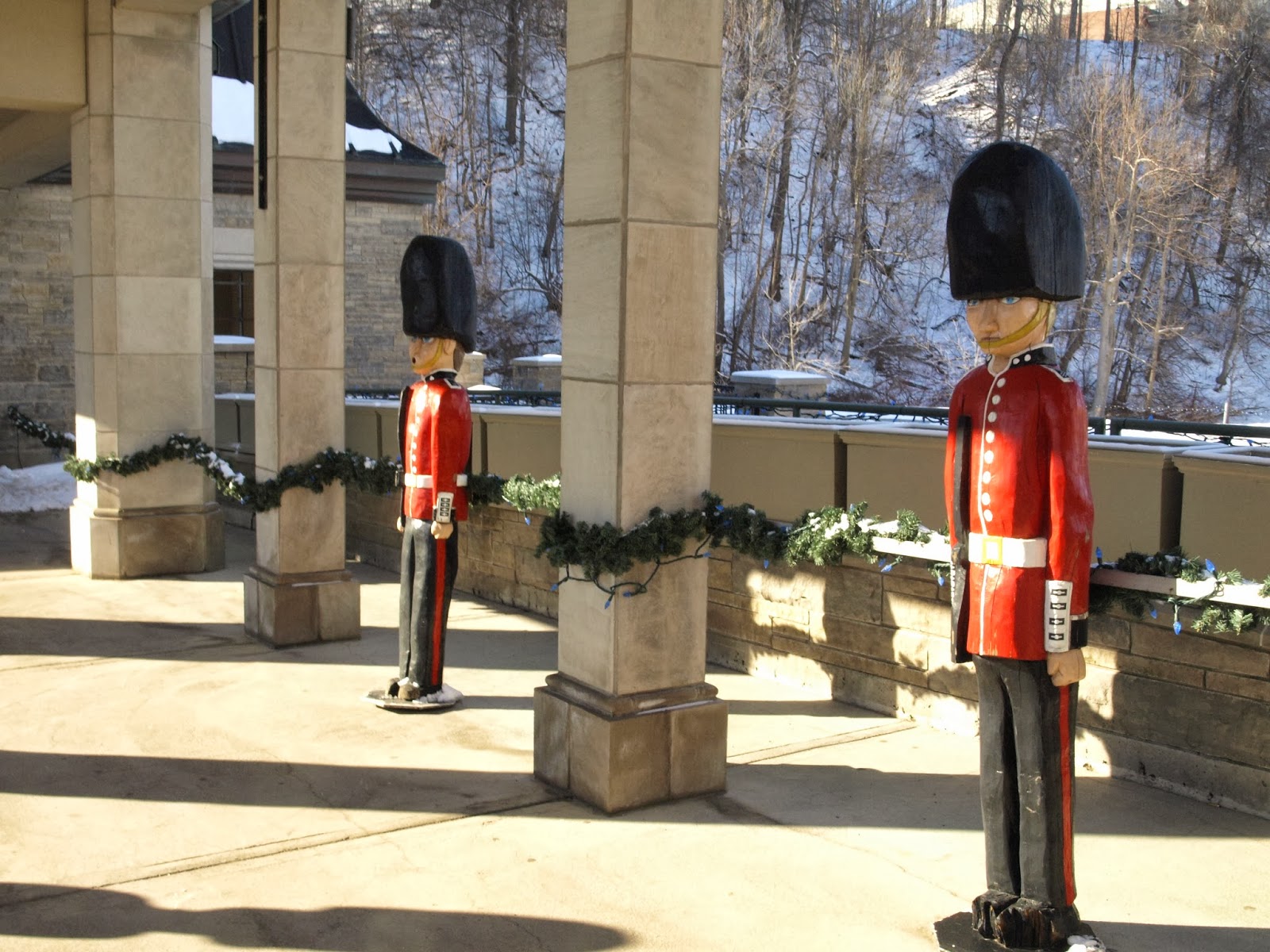 We found our hotel super easily--the Canadian side of Niagara Falls is only super built-up in the area right next to the falls--so we settled in and got some dinner (which was kinda pricey, except for when we remembered it was in Canadian dollars, which are a little "weaker" than the American dollar. Win!) then came back to the hotel for the night.

That was when the real trouble began... ;)

Nikolai didn't want to sleep in his pack and play by himself so he got to stay up late (10) and go to sleep in our bed when we did.  He tossed and turned a bit for the first hour, which is not unusual (also, a big reason we don't let him sleep with us) but then, about 11:15, he fussed a bit in his sleep...and started throwing up.  Luckily, Jesse woke up quicker than I did and ran with him to the bathroom before he could make a mess everywhere. Unfortunately, the toilet lid wasn't open so Jesse positioned him over the sink instead...>.> I'll spare you the sordid details, but Jesse cleaned that one up for me, too (thank you again a million times, Jesse!).

Anyways, I'm sure no one really wants to know the gross details, but suffice it to say that Niko was sick 2 more times over the next 1 1/2 hours.  Jesse finally bedded down with him on the floor around 1 am and we prayed he'd wake up feeling better so we didn't have to cut our trip short!

Thankfully, whatever was affecting Niko seemed to have run its course by that point because he slept the rest of the night and woke up rested and happy! Also, I should point out that even though he was sick, Niko was incredibly cheerful the whole time! I wouldn't have blamed him a bit if he had been sad and a little whiny in between being sick (heaven knows I get that way when I'm ill!) but instead he was tired but happy. It's a little thing, I know, but it was really nice and made our job easier!

Stay tuned tomorrow for more of our adventure! ;)

Mom said…
Still beautiful after all these years. I was last there at 10yrs. old, only it was summer. Beautiful pictures! Thanks for sharing!
Love you!
March 12, 2014 at 5:09 PM

ivrcti said…
Isn't it wonderful to explore as a family! I love sharing these new experiences with the people I love most!
March 12, 2014 at 6:30 PM

Kylie said…
Catherine, your hair is so long!! I had no idea it froze, either, I was only there in the summer! You guys should go to Palmyra next so I can live vicariously through you...
March 13, 2014 at 12:38 AM

melissa said…
I have always wanted to go there, and I keep planning trips there that we don't take! I love that you went. awesome frozen pictures too.
March 13, 2014 at 11:35 AM