Today our Nikolai turned 5! It felt like a really big birthday (maybe because of that whole "go to kindergarten in the fall" thing?) so we tried to celebrate it with great gusto. Also, Nikolai really enjoys going all out for things, so we thought he'd appreciate it :)

We started out the day by waking him up by singing Happy Birthday (his idea), and then he came into the livingroom, which we had decorated with streamers and a floor full of balloons. After that he was off to school, where they did normal school things and also ate some cookies that we brought and sang happy birthday. It sounded like a great morning, from his account of it!

When he got home, Jesse had planned some games in the living room: keep up the balloon, musical chairs, red light green light (which Miriam loved, and she said "green wight!" but never "red wight"), and building a colossal blanket fort. 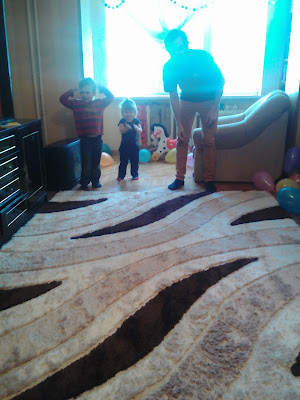 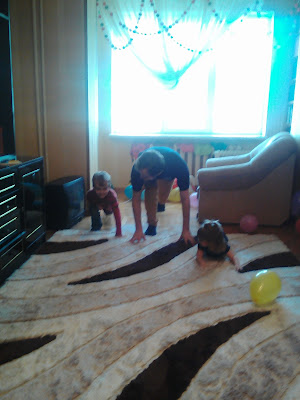 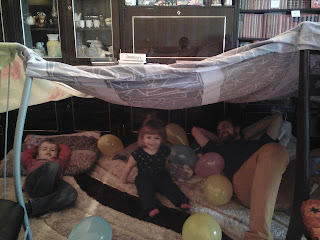 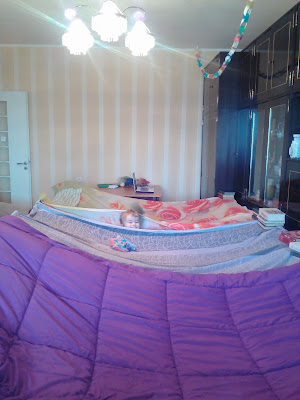 After we built the blanket fort, Jesse put Miriam down for a nap and I asked Niko some 5 year old birthday questions:

A2: My Little Pony (the new series)

A3: Nothing. (and then after some prodding...) When I play with my friends.

A4: (he didn't know how to answer this one) Playing with toys. 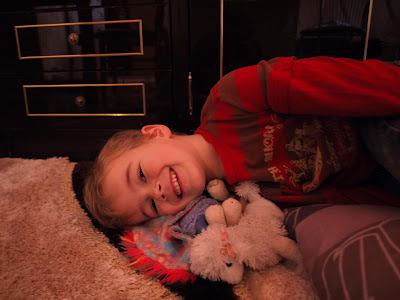 (these next few photos were my attempt at getting a good, non blurry photo of Nikolai on his birthday. I was mildly successful...)

Q5: If you could change your name, what would it be?

Q8: What work do you want to do when you're big?

A8: Building toys for kids. 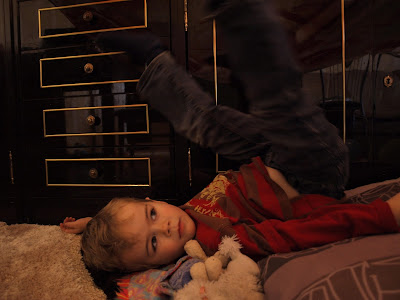 Q9: What do you like to sleep with at night?

A9: Winnie the Pooh!

A11: My Little Pony, the people one (Equestria Girls). 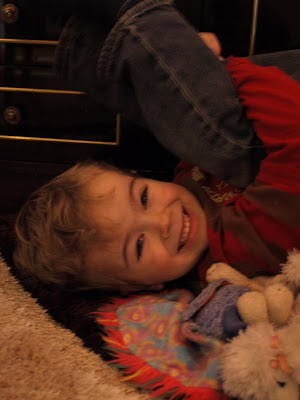 Q16: What's your favorite thing we did this year?

A16: Going camping because we have yummy s'mores and have fun hiking and setting up our campsite. 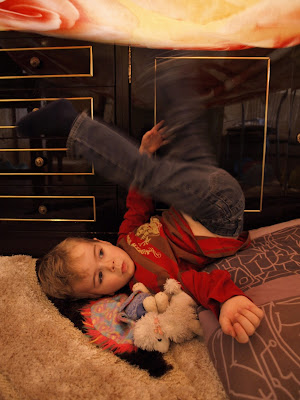 After the Q&A, we watched a brand new My Little Pony movie in our blanket fort, and then opened one present: a perler bead set. He played with some of these at a friend's house before leaving Michigan and LOVED it, so when Jesse spotted some in a shop here we nabbed them for his birthday. I loved them as a kid and it was super fun doing them with him today!

After perler-ing for a bit, we woke Miri from her nap and headed off on a treasure hunt! I had made 6 simple clues that led to locations I knew Niko could guess, and off we went!

The second stop was the picture stump, of course: 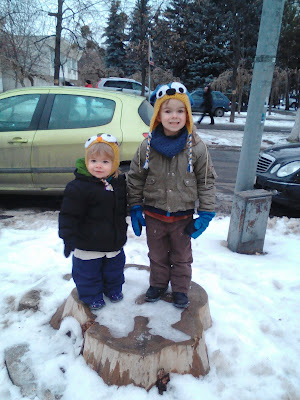 I always made the clue magically appear on my pocket (because I couldn't very well have gone around taping up numbered clues around Chisinau) and Nikolai thought that was really fun. 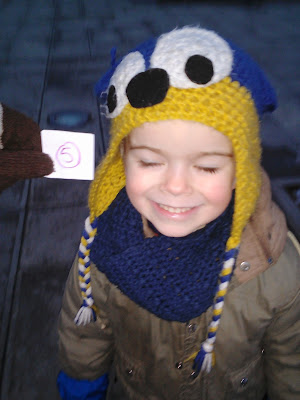 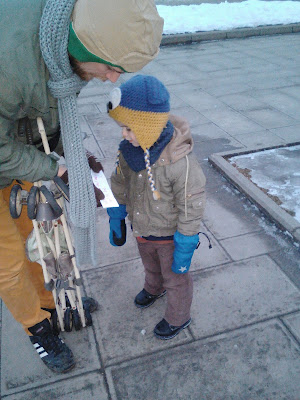 The clues led to Nikolai's favorite place: McDonalds! (his favorite foods often come with a heavy dose of capitalism and materialism)

But really, having dinner with the littles was really fun, and I could tell Nikolai appreciated the gesture because on the way home he said, "Having a treasure hunt to McDonalds for dinner was really useful." 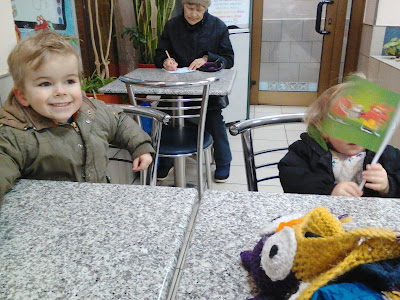 When we got home, it was finally CAKE AND PRESENTS TIME!

Nikolai requested a My Little Pony cake this year, so I used a pinterest tutorial to render his favorite pony (Rainbow Dash) in frosting and covered the outside of the cake in a rainbow of M&Ms (which were, unsurprisingly, his favorite part). 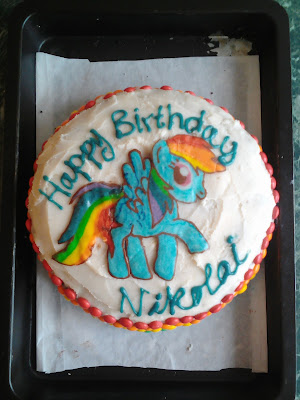 (Also, the recipe I used for the chocolate cake inside was the BEST I've ever tried, so I'm linking it here) 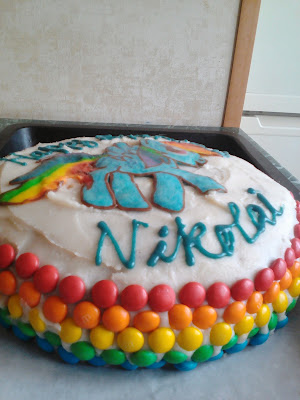 Then we sang happy birthday, which was super great because as Jesse and I sang "Happy Birthday to Youuu" Miriam would chime in and sing "Niko!" each time. Seriously, two kids is magic sometimes. 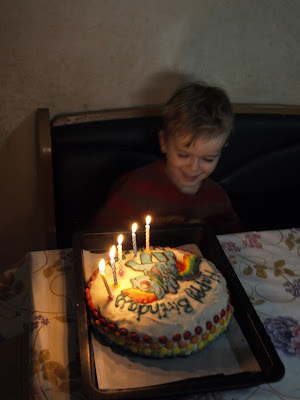 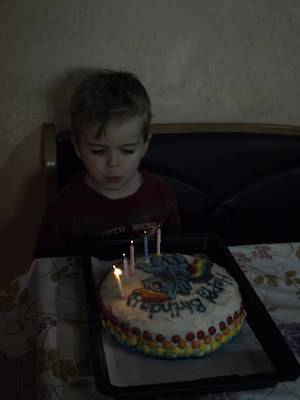 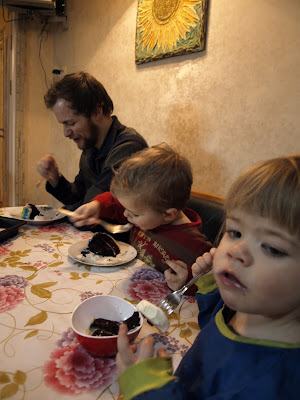 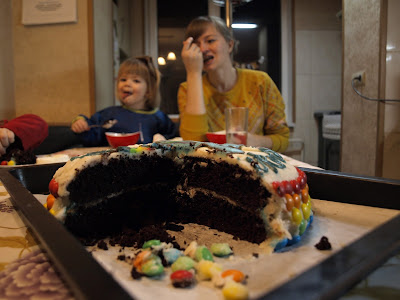 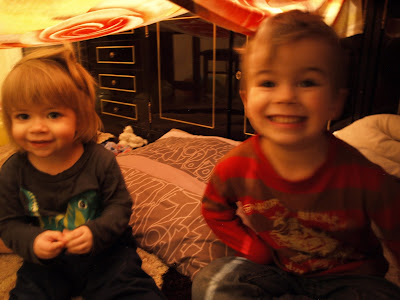 Once while opening them, Niko had one halfway open and said "What is it?" and Miri, peeking over his shoulder, shouted, "Weh-goooooos!" (Legos). 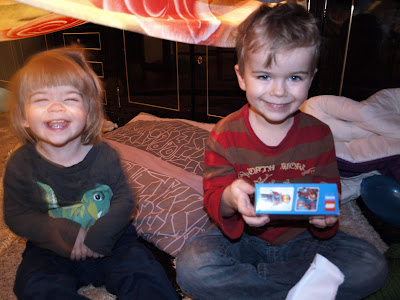 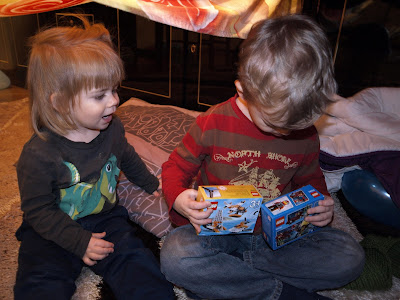 Obviously we had to spend the rest of the evening putting them together, but we saved time for a little dance party before bed (to this song, which has been on repeat in our house lately). 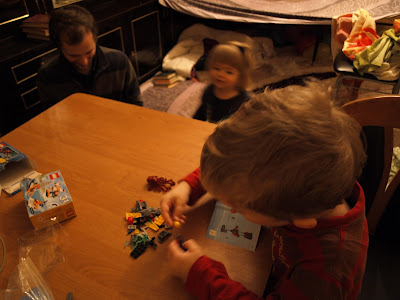 Nikolai at 5 is hard to explain. He does nothing halfway--he either does it passionately or not at all. He is impressively stubborn (surpassing even his incredibly stubborn parents), quickly creative, surprisingly determined, and intensely loving. He has many interests (of which are playing Legos, imagining with his toys, making projects, watching shows and playing board games), but his favorite thing of all is doing any of the above together. He is swiftly learning empathy and how to be understanding. He is thoughtful, frustrating, and sometimes even poetic. He is an incredibly complex person in a small body (like a TARDIS--bigger on the inside!) and parenting him is challenging and beautiful and more and more rewarding every day.

Happy Birthday Nikolai, and may year 6 be your best yet!

ivrcti said…
I love that you're continuing some of our family traditions (the treasure hunt) and added tons of great new ones!
January 23, 2017 at 6:12 PM

Kyra Moon said…
Happy birthday Niko! What handsome, great kid! (And great job on the treasure hunt and cake!) A week ago I remembered that it was his birthday soon and we were planning to make him a card, but I guess it'll be a day late now.
January 23, 2017 at 10:34 PM

Loïe said…
Happy happy birthday, Niko! That sounds like a wonderful day of celebrations. And I'm so impressed by the cake you made! Beautiful.
January 24, 2017 at 6:12 AM

Maren said…
That sounds like such a fun day! Way to make it special. I wish our boys could still be playmates. You did a great job on that cake. And we have recently entered the world of Legos too. They keep them so occupied. Happy birthday, Niko! (Can't believe he's FIVE.)
January 25, 2017 at 1:21 PM