Hello friends and loved ones! This might have been my longest hiatus so far. It is due solely to the fact that on December 11th, I dropped my computer and broke the cord. I immediately ordered a new one on Ebay and was assured it would be there anywhere from two weeks to a month. Being an eternal optimist, I delayed blogging on Jesse's computer, thinking that surely my cord would arrive any day and I could just do it on my computer!

Well. It has been almost a month and a half (11 days past when the seller assured it would arrive) and there is no sign of my cord. It is almost certainly due to the slowdown that happens in the Moldovan mail system around the holidays (and there are lots of them here: many people celebrate Christmas and New Years by the modern calendar and other by the Julian Calendar, for those that are Russian Orthodox). Regardless of the reason, it hasn't arrived and the seller has said they will give me a refund if it hadn't arrived by tomorrow. So then we get to begin what I was hoping to avoid: a long hunt all across Chisinau to find a laptop cord that will fit my computer (my laptop has an unusually small jack, so it might be tricky--hence why I ordered one online!)

So, long story short: at some point I will have a working computer, and in the meantime I have muscled up the effort to blog on Jesse's device.

Since I posted last we have done a lot!! I have 7 posts coming in the next week detailing all sorts of things, from Christmas to our holiday merrymaking and everything in between!

We had a good one this year. Jesse and I watched a couple of movies, then rang in the new year with some sparkling Georgian lemonade and a million gazillion fireworks.

I say a million because it seemed like everyone in Chisinau had bought their own fireworks (those big ones are legal to buy here) and they were going off all over the city! Tons were going off on the horizon, and some even went off in the blocks near us. Sure, it was probably dangerous for a bunch of untrained civilians to be lighting fireworks that go hundreds of feet in the air, but it also felt like all of Chisinau was SO excited about the new year that they just couldn't contain it! (And the revelry didn't stop there--we've heard at least one instance of fireworks going off every night since!)

I couldn't get any good photos, but here's a decent video of some of them. It's so loud because I think some were going off in the block next to us as well!

In the morning, we celebrated with the kids by eating homemade cinnamon rolls and reading memories from our memory jar. 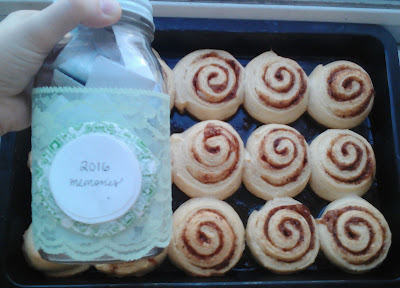 It made for a really enjoyable morning!

And, in case you need a laugh, here's a few of our funnier memories (also, please notice that these are all said by the kids, because they are the funny ones around here):

Niko: Hold on, I need to tell my bandaid something. Bandaid, take good care of my owie until the morning.

(playing with Pokemon with a friend)

Niko: *pretending to be the pokemon* I'm going to kill all your friends!

Freddy: No, I don't have any friends.

*turning to Jesse and me*

Niko: I'm speaking for none wars all of the days.

(while eating lunch, looking out the window)

(I believe I began crying at this point)

Niko: I like myself because I eat lots of pancakes.

I had Miriam in the baby carrier on my front, and couldn't resist giving her tons of kisses. Miri put up with it for awhile until protesting:

We had recently taught Nikolai the term "bladder" in discussing his urinary system, and apparently that term was confusing because:

Niko: *declaring proudly* No pee in my gutters!

(Niko and Miri were playing pirates in their room--one of the first times they've really played together!)

Niko: *referring to Miriam* Babies can come on my pirate ship because babies don't want money.

There are loads of stray dogs in Chisinau, some of which have set up semi-permanent residence on the block over. Miriam always notices them, and one day she talked to them:

Looking back, it was good to see that we had lots of happy and silly memories from Ann Arbor as well as here in Chisinau. Moving is hard, but we are together and that is good.

melissa said…
Good to see ya back! Good luck with the compy cord.

Maren said…
I look forward to your memories every year. They are so fun. Gosh China sure knew how to do the fireworks too. It's parts exhilarating and terrifying! I wish you luck with your cord endeavors and look forward to a week of posts.
January 22, 2017 at 10:17 PM

ivrcti said…
What a fantastic tradition! I love Niko's comment about the fluttering leaves. We all want to fly!
January 23, 2017 at 6:16 PM

Loïe said…
Hahahahahaha, I am cracking up over those quotes! They are all fantastic, but I think my favorite one is the bandaid one.
January 24, 2017 at 6:17 AM