We've been doing a lot of grilling lately, since it's been hot enough 1) to cook outside and 2)  to make we wary of heating the house up a ton by cooking inside.

Nikolai, obviously, has loved more time to play outside.

(And to make silly faces) 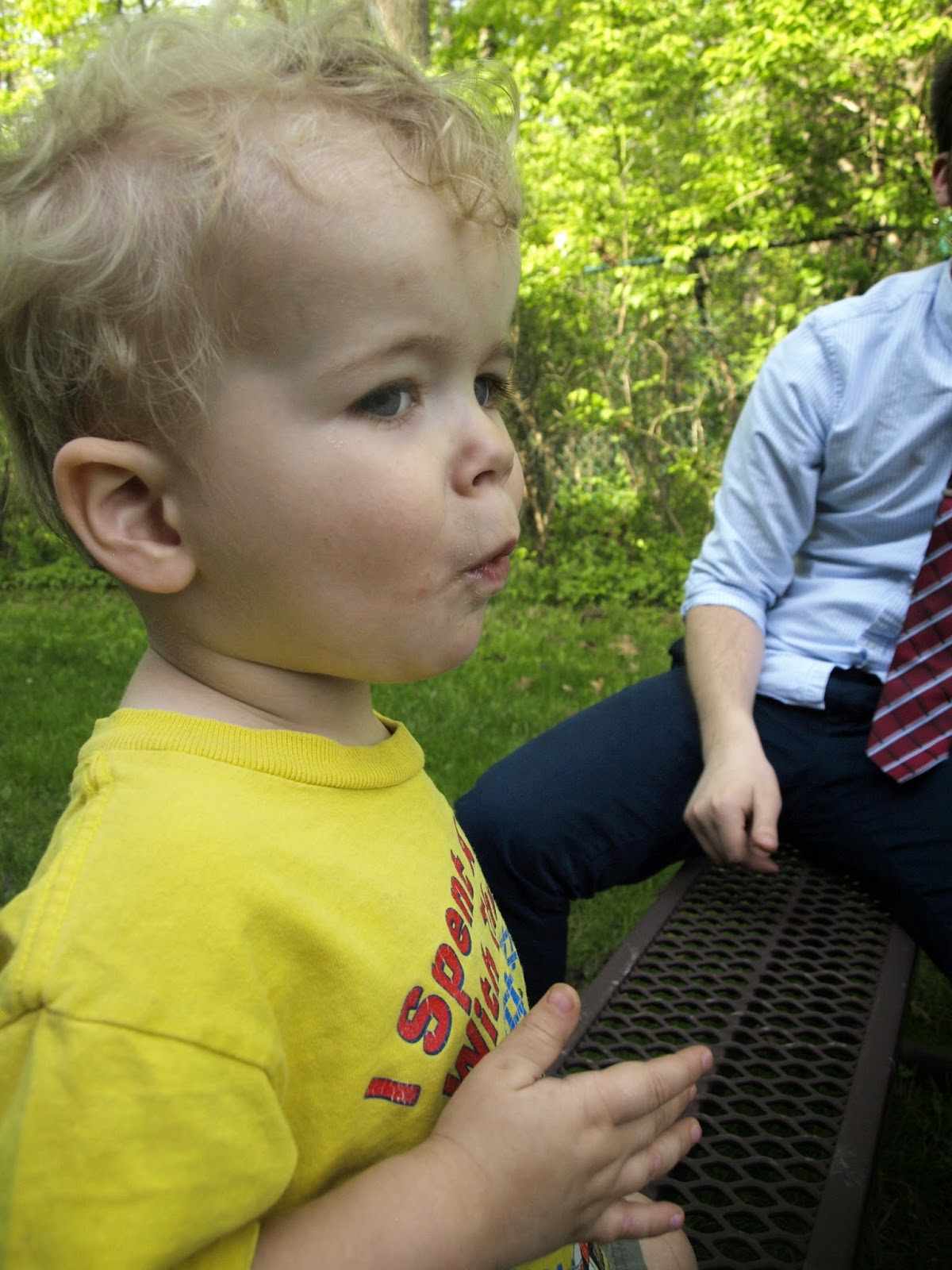 Usually Megan and Jordan come over, because they live so close (four doors away!).  Jesse and Jordan love having time to engage in rousing theological discussions. 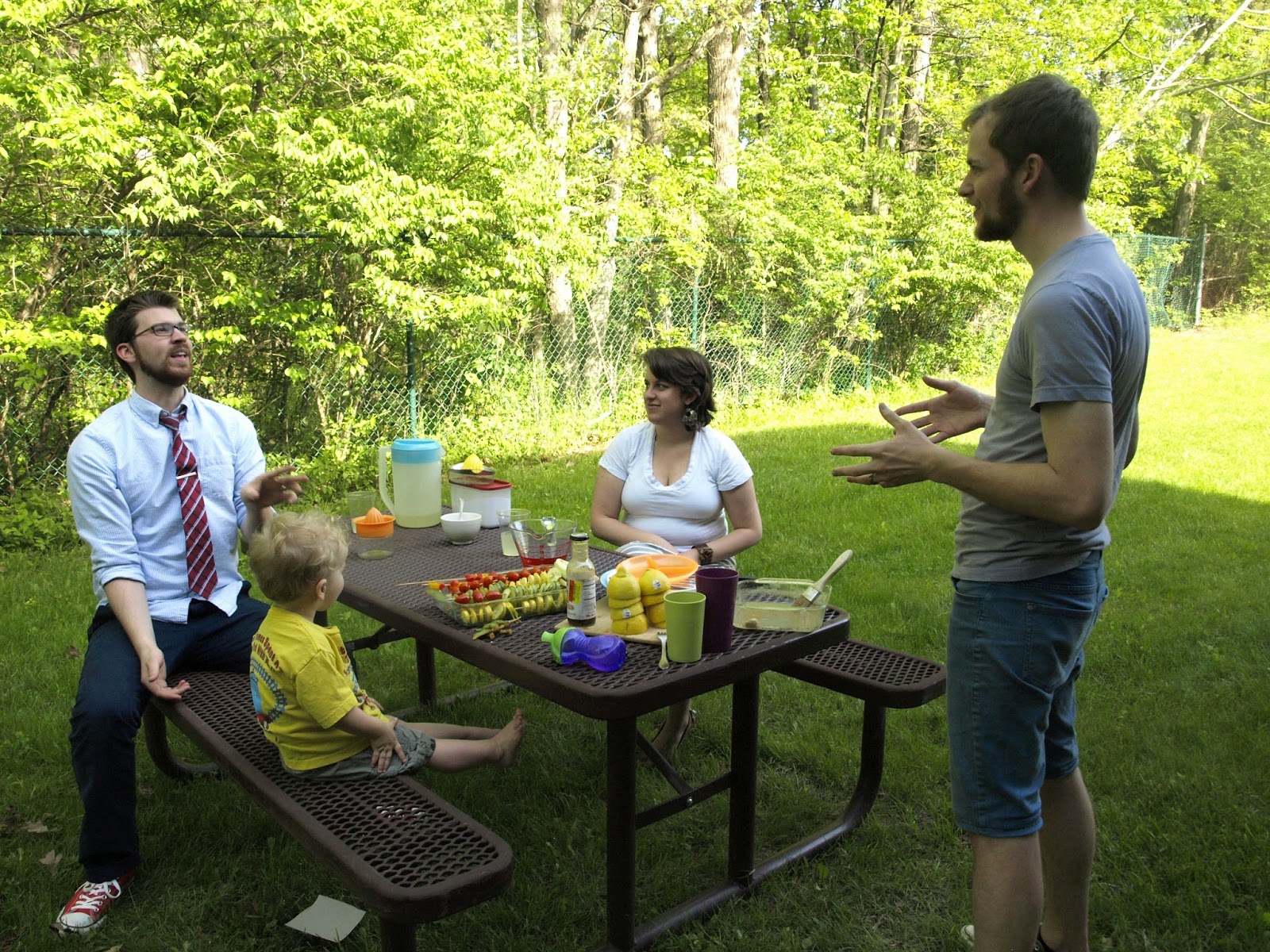 Last week we marinated and grilled chicken, as well as tomatoes, peppers, eggplant, zucchini and squash. 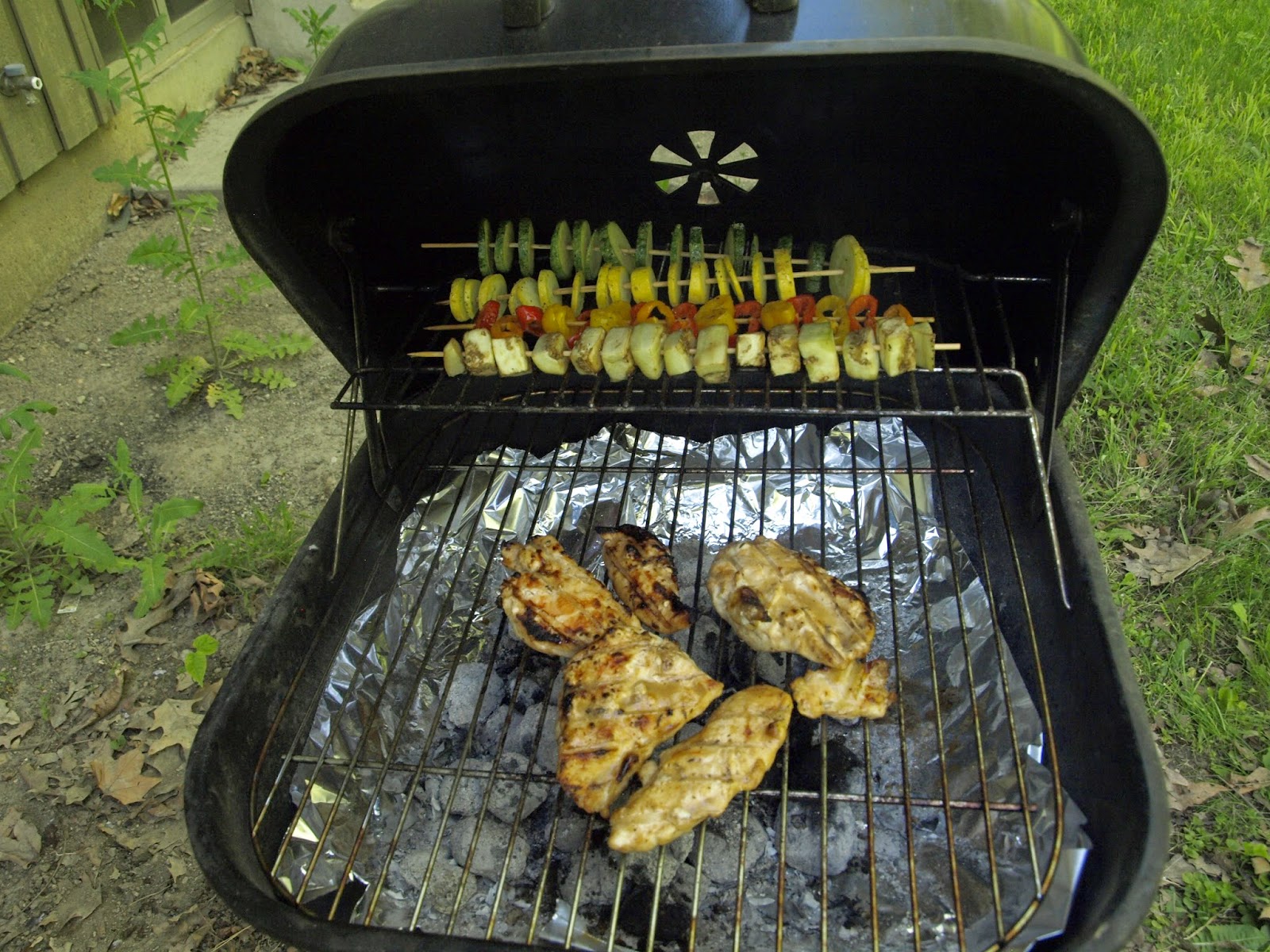 Nikolai, as it turns out, LOVES sweet baby bell peppers and ate half a skewer's worth before they were even cooked! 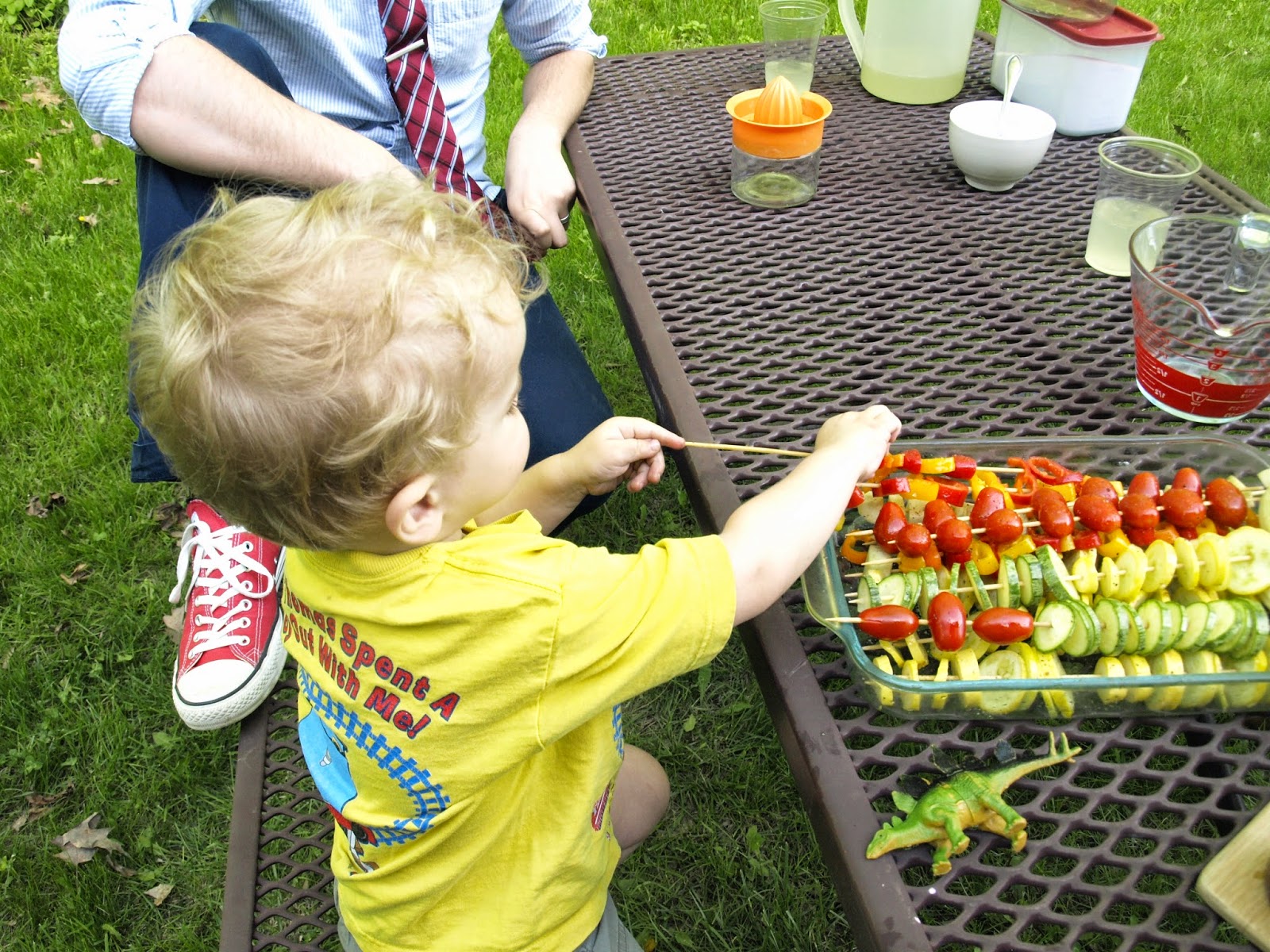 I also made some potato salad for the occasion. Here's the spread: 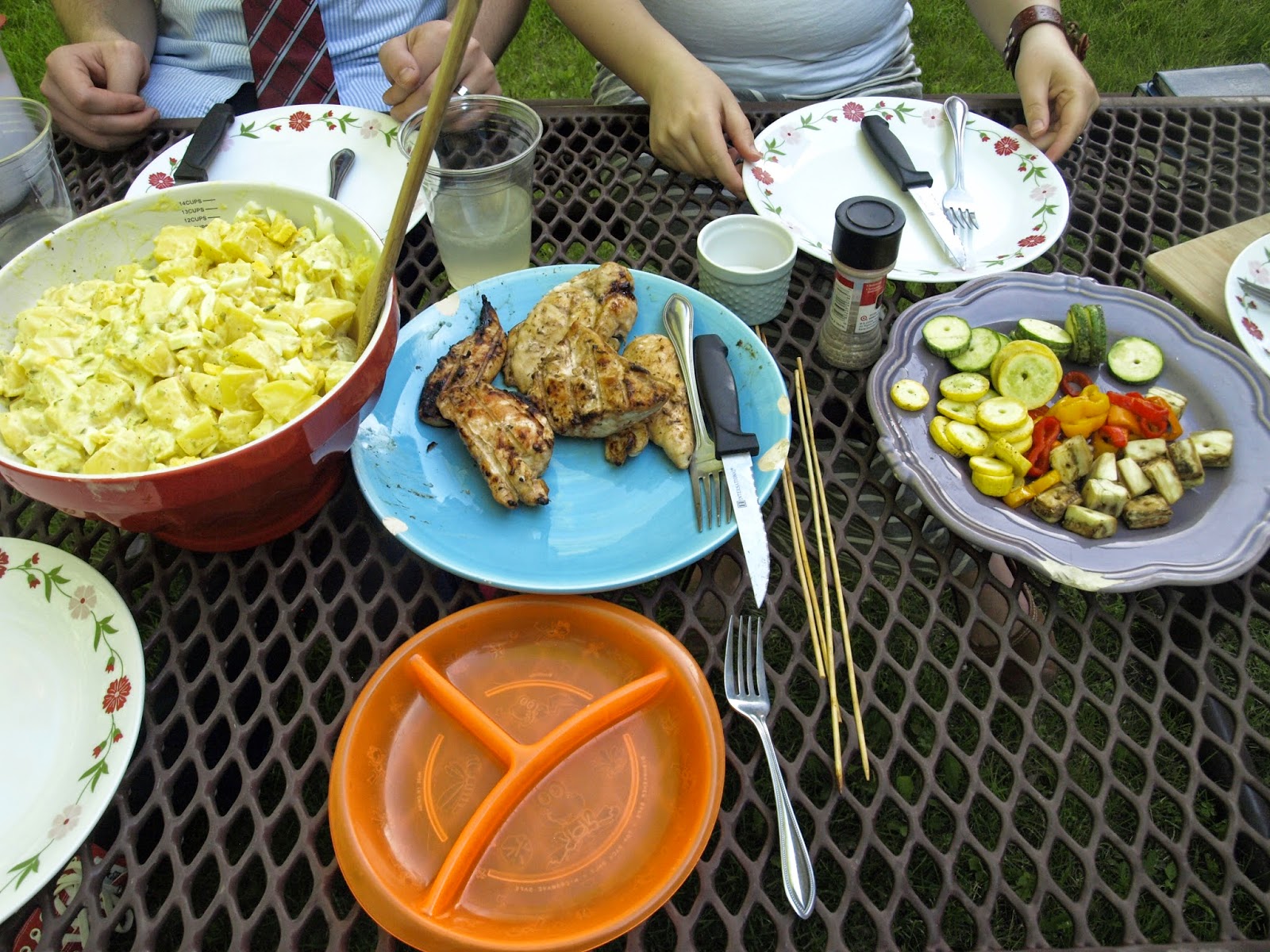 Yesterday we grilled again, but this time we made tacos!

Nikolai sat on the stoop, saying, "Neglai ousside!" ("Neglai" is how he says his name of late) and eating pineapple. 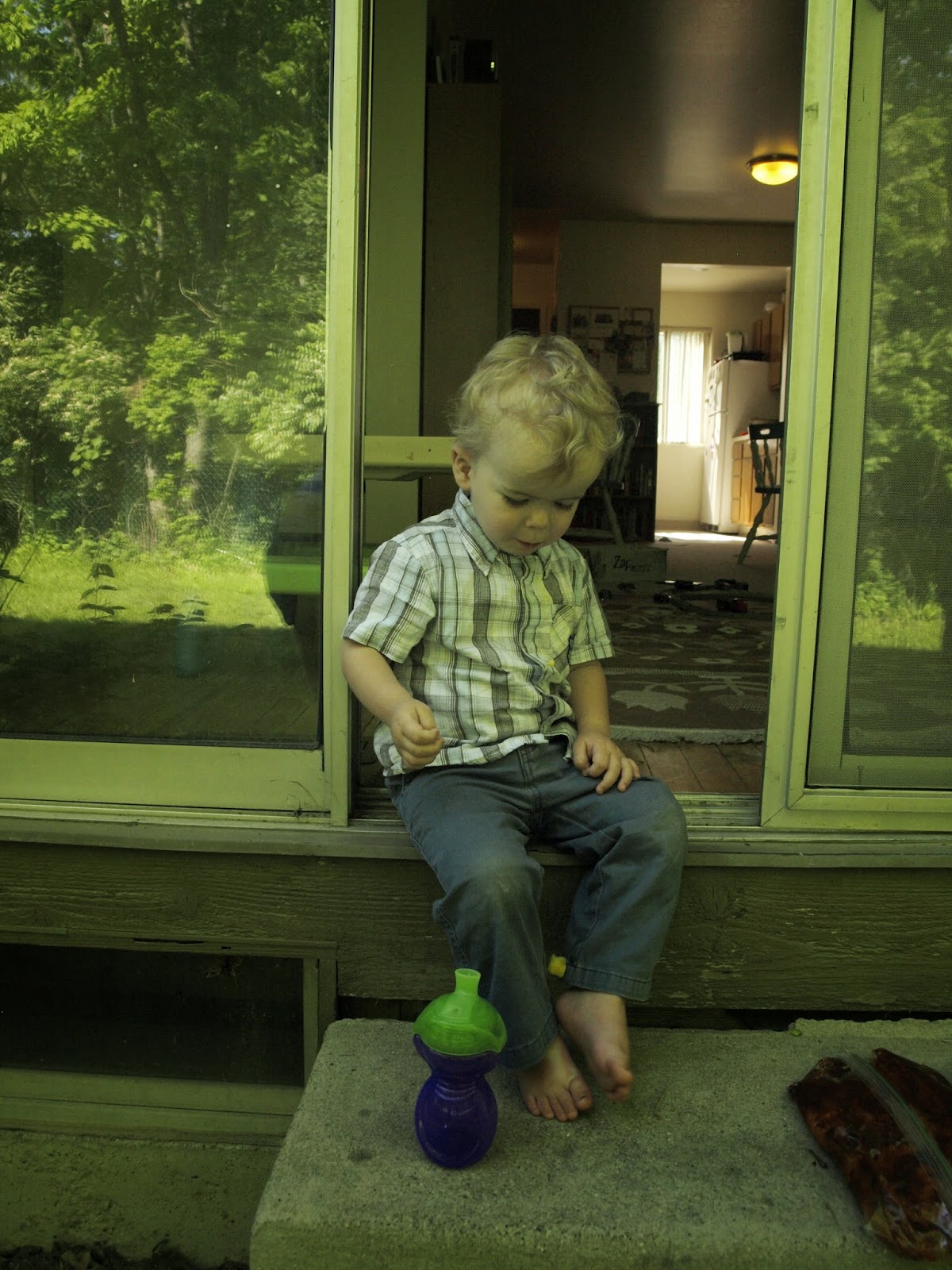 He wandered away a lot while we were cooking--we'd let him wander pretty far away before running off to bring him back. Eventually he wanted to wander out of sight and we wouldn't let him, so he resigned himself to sitting on the toy lawnmower he was playing with. 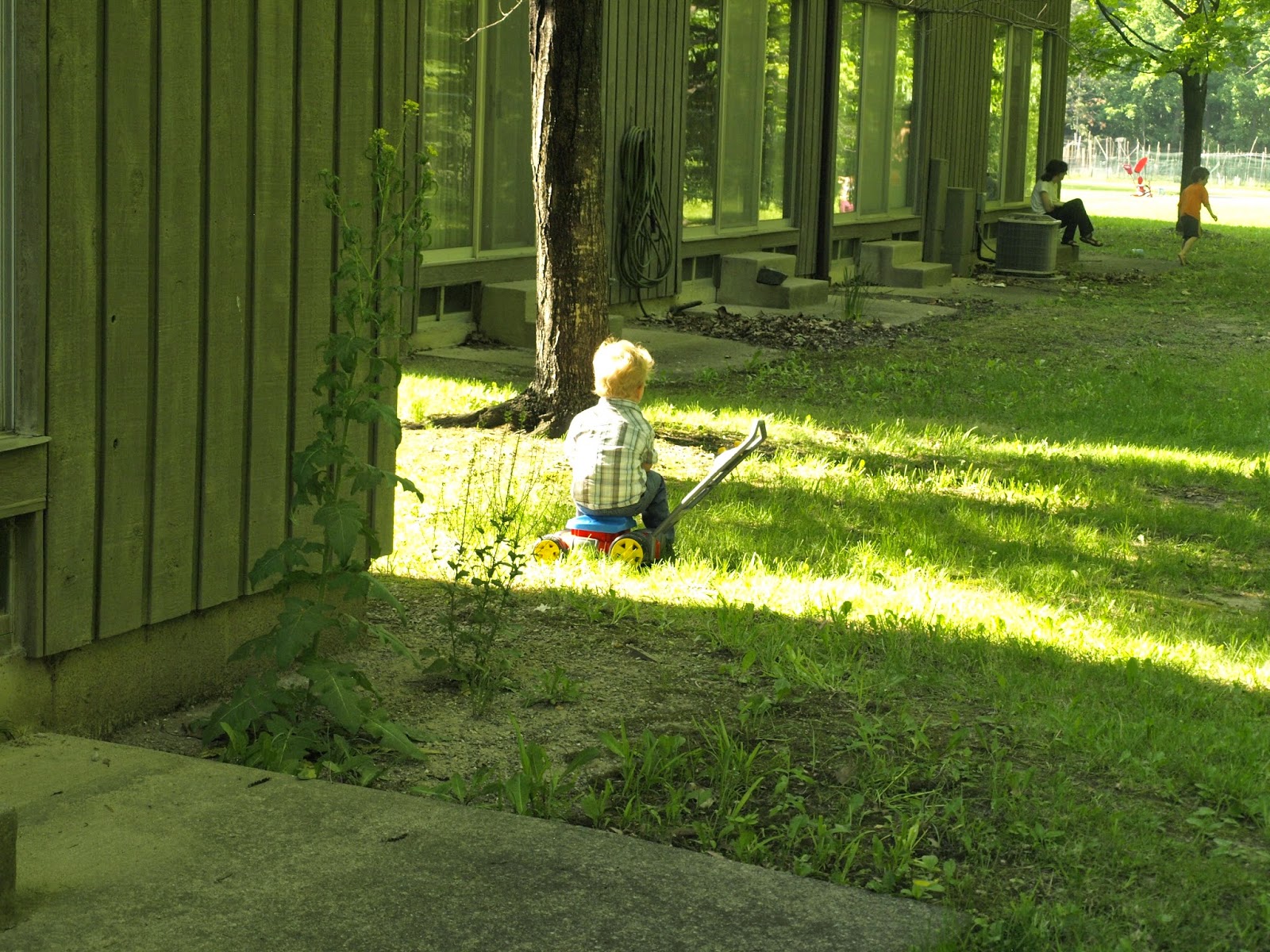 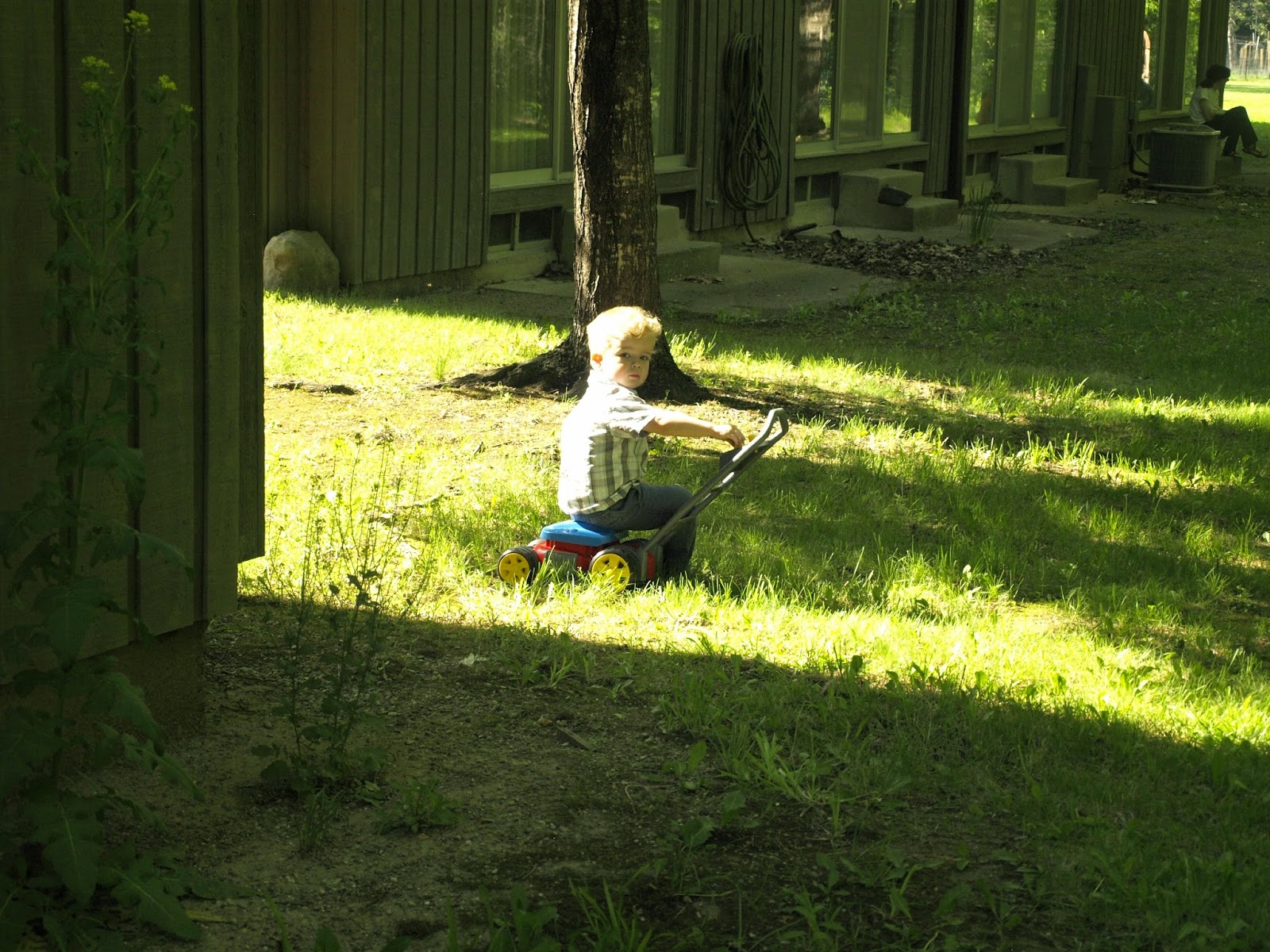 The spread: Pork marinated in pepper and adobo sauce, with cooked pinapple 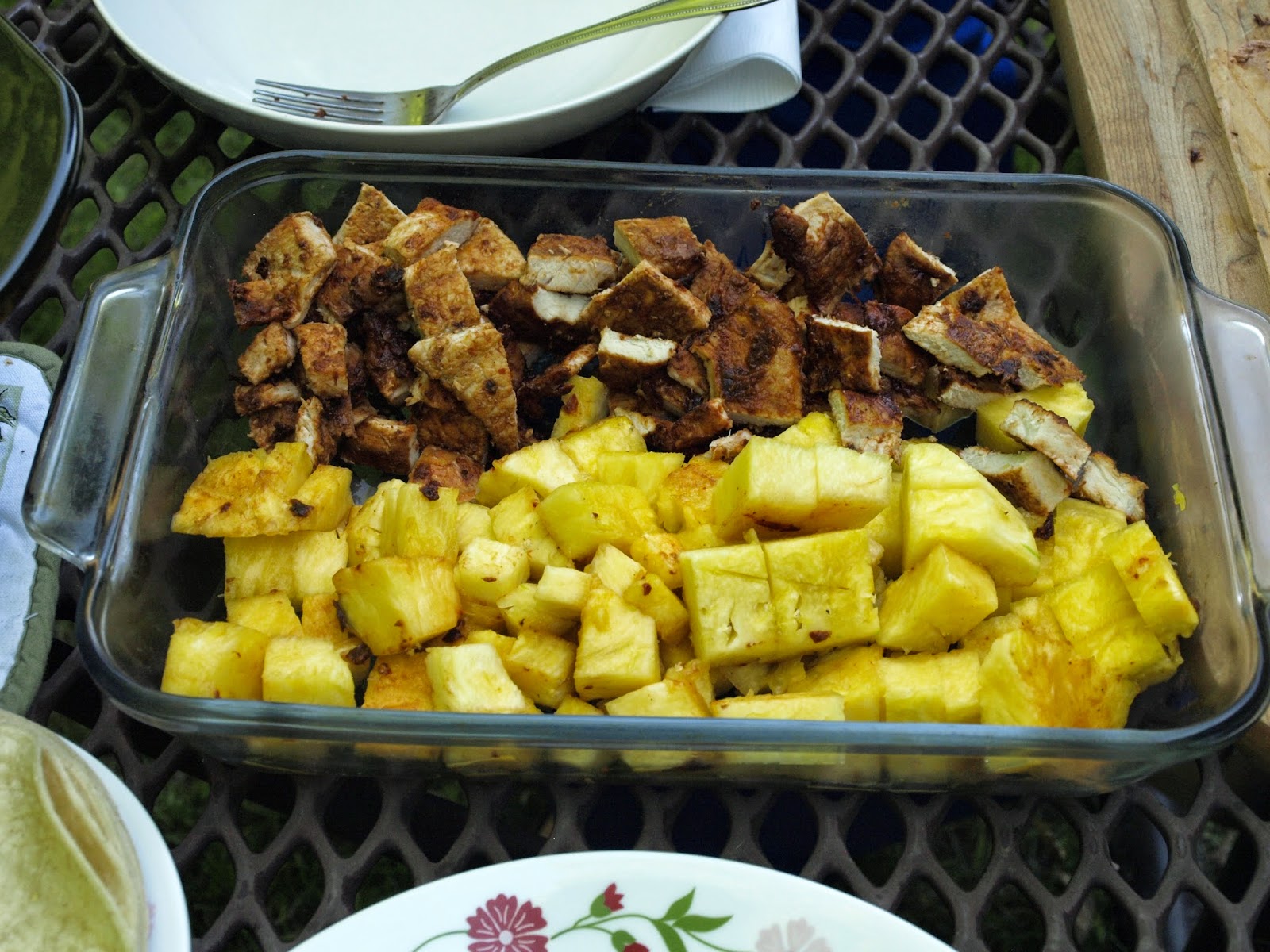 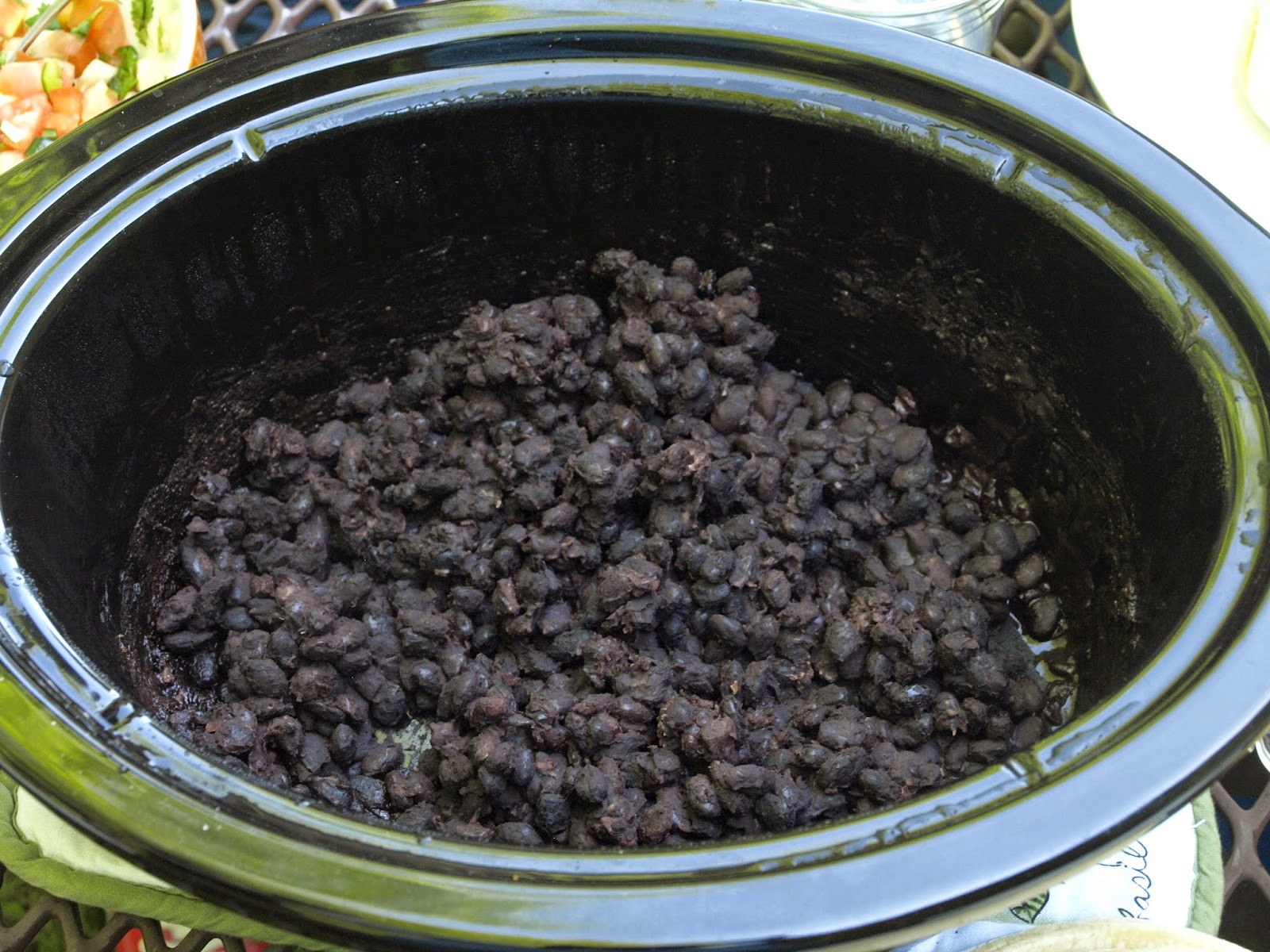 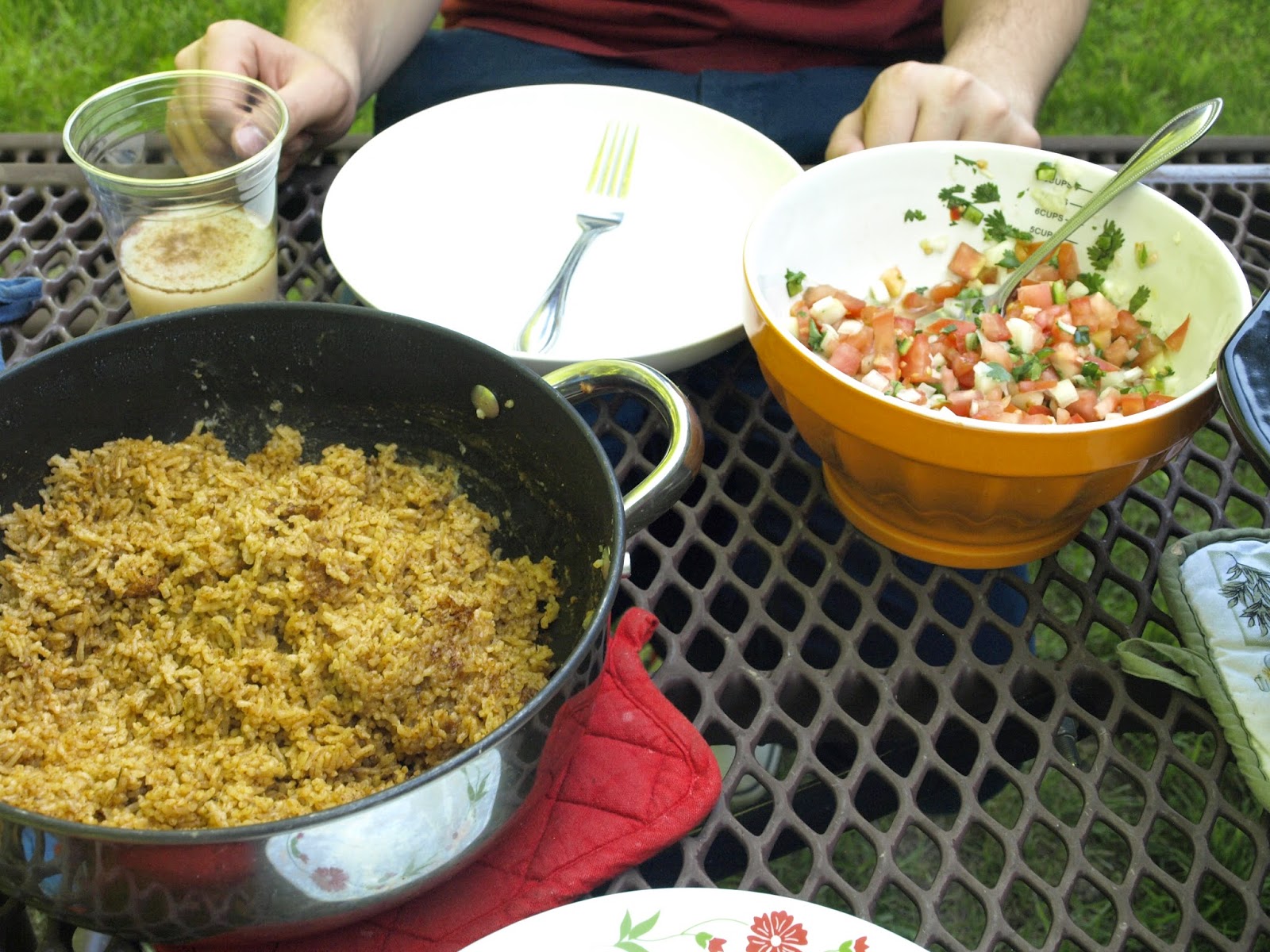 I'm not a huge fan of smelling vaguely of smoke after dinner, but I'm really enjoying not heating up the house (ah the joys of an unairconditioned apartment) as well as eating outside with good company. I think we'll be doing this more often this summer!

Anna said…
bleck! no air conditioning!! This is the first apartment that we've lived in with AC. Now I'm spoiled.

melissa said…
wow, that's awesome. i'm glad you have friends to grill with, and you guys are always awesome with food. i want some. come grill for us please.

Catherine said…
Melissa, it's taken us several semi-failed times of grilling with charcoal to finally figure it out (and mostly we bought a coal chimney to cook the coals in first). It's hard stuff!
June 2, 2014 at 11:58 AM

Michele said…
! Sounds like the grad student life! We don't have any air conditioning either so we get creative with food.
June 2, 2014 at 12:14 PM