And we're back! I finished NaNo last weekend (see the post after this!) but then Niko and I promptly got sick so I haven't had a chance to post. But we're finally feeling better-ish today so in the interest of catching up, I'm writing a bunch of posts that will post over the next few days.

So! Last week we celebrated Thanksgiving with a couple we know from church.  We split up duties for the meal (they tackled the turkey--hallelujah!) and created a really lovely meal!

I tried my hand at pies: 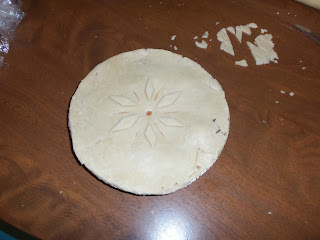 I have to say that my apple pie is made from homemade crust and home-canned pie filling, which I feel makes up a little bit for its slightly unsightly appearance ;) Oh, and I made a pumpkin pie too! 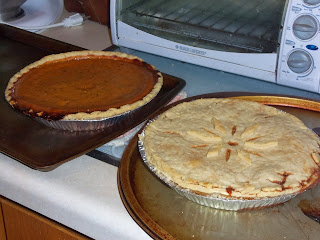 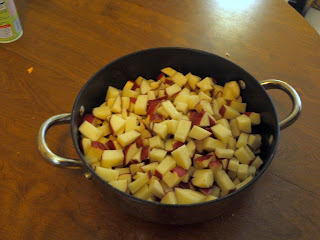 And then, in the interest of full disclosure....
My mother in law makes this awesome sweetpotatoes+cranberries+struesel+marshmallow concoction that I really love, so I made it this year!  The only problem came when the recipe told me to put the pan under the broiler to "brown" the marshmallows. Well, it told me to put it in there for FIVE minutes which I knew was heinous, so I set the timer for 2....but after 1.5 minutes I went in to take a nibble at a roll and smelled smoke! I pulled the pan out of the oven to this sight: 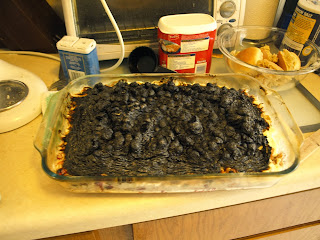 The marshmallow lava actually looked really cool--it had a great texture to it and I actually really wanted to take some cool close-up shots of it, but I had an idea and didn't want to wait to see if it would work.  Carefully, I stuck a spatula under that whole mess and luckily it was so solid that the whole mess just lifted right off! I scraped off what was left of the marshmallow residue underneath (it didn't look burnt but I wanted to be safe) and put new marshmallows on and put it in the regular oven this time: 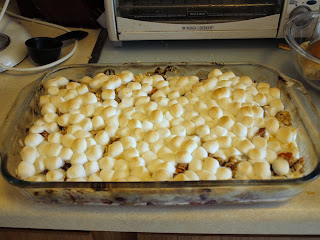 Ta-da! And it didn't taste burnt at all.  Recipe saved! ;D

So here's what some of the spread looked like when we got to our friends' house! (I made the green bean casserole, rolls, potatoes, sweet potatoes and pie) 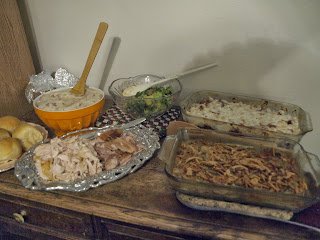 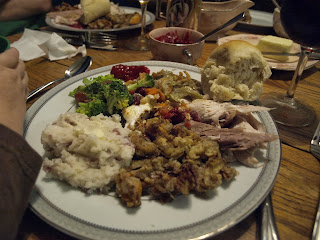 Alas, poor sweet Niko was starting to come down with a terrible cold, so he spent most of the afternoon curled up on the couch, watching Daniel Tiger: 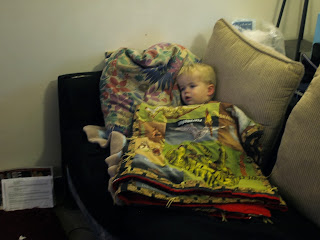 But despite his illness, it turned out to be a really nice Holiday!