Well, here I am, blogging about Halloween three days late. Really, I'm blogging about it a week late, because the pictures I'm posting are actually from our church's trunk or treat (trick or treating from the the backs of cars) from last weekend!

I'll go ahead and state right out that I'm that crazy woman that spends 40+ hours making Halloween costumes that get seen for less than two hours...but it was fun, ok?  And although maybe it was silly to go to the work of embroidering Halloween costumes, we're most definitely going to keep those shirts now and re-purpose them for later costumes.  (also, random side note: a slightly nerdier alternate reality version of myself DEFINITELY would have been a cosplayer--you know, one of those kids that dresses up crazy for anime conventions. Cause boy do I like spending forever making a costume!)  Anyways.  Without further ado, behold: Jesse and I as Russian peasants, and our pet siberian tiger! 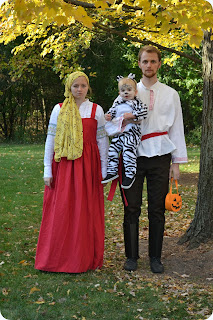 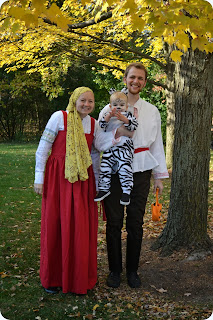 The trunk or treat was FREEZING but a total blast.  Our friends Megan and Jordan set up a carnival in their trunk and busted out some silly costumes, which all the kids loved: 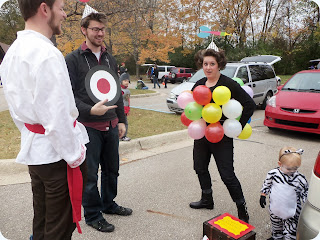 Sort of surprisingly, Nikolai really enjoyed himself! First of all, there were doughnuts, which is an obvious win, but he also got the hang of walking around to people's trunks and getting candy placed in his bag.  We tried to get him to say "please" at the very least, but as it turns out the first piece of candy he got was a lollipop and he was too busy sucking it later to say much of anything. 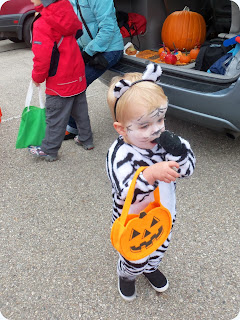 Nikolai did spot his BFF Hyrum, and they had a fun time chasing each other around the cars in the parking lot. 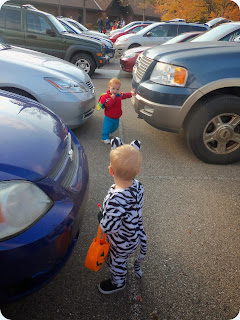 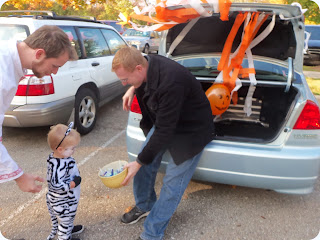 And finally, my favorite part of Niko's costume: 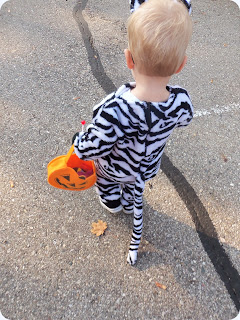 That little tiger tail dragging on the ground. SO CUTE!!!

Yay for a fun Halloween!

Kylie said…
You all look adorable!! I always have such grand intentions of making awesome costumes for so far I'm 0-3. I guess we all have our strengths? Haha. Maybe someday we'll all live close again and have fun costume parties.
November 4, 2013 at 12:13 AM

Maren said…
Don't worry, I haven't blogged Halloween yet. :-) I look forward to your posts but it also makes me so sad to see the boys running around without R! We really miss you guys. And your costumes are awesome! I can't believe you embroidered those. They are beautiful. But your facial expressions look scary in the first picture...remind me never to cross you guys the wrong way...
November 4, 2013 at 12:21 AM

ivrcti said…
These costumes are a sure sign that you are in fact my daughter, though it appears you actually have creative talent to go along with the ridiculous energy level!
November 4, 2013 at 11:05 AM

melissa said…
your tiger and my leopard should get together.