A few weeks ago, Moldovans celebrated Victory Day, recognizing the end of WWII. It's an interesting holiday here, because the end of WWII meant the end of Nazi occupation of Moldova (in cooperation with Romania) but also the beginning of true Soviet rule in the area, and the end of an era in which Romania and Moldova had been united. So it was unsurprising that a lot of the celebrations were in Russian, and there were a fair amount of Soviet-era flags around, but still definitely interesting to see said flags.

There was a giant parade of people marching from the center of town to the WWII memorial (which we didn't go to, because we weren't sure the kids were up to the walk). Some people wore WWII-era military garb, but most just wore nice clothing.

Many people carried pictures of family members and loved ones that died in the war. 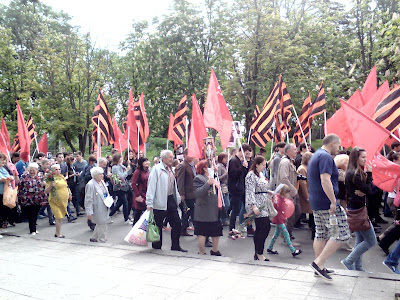 I'm sure I've always sort of known this on some level, but it struck me living here that my experience of WWII as an American is vastly different than that of people who lived on the European continent. In the US, the end of the war meant that our soldiers could stop fighting and dying (including my great-grandfather, who died in England) and could come home. But in Europe, it meant your country wouldn't be occupied anymore, that you didn't have to be afraid of bombs falling on your house, or that you could return back to your home after fleeing the war. In Eastern Europe, it meant new boundaries being drawn and new national identities being taken up. The end of the war meant so much change for people in this region.

Ok, I am going to restrain myself from writing a long, drawn-out essay on the purpose of commemorating the end of wars, and instead say that it was very interesting and quite moving to be in Moldova for this holiday. 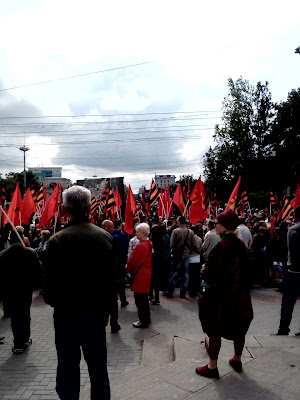 After the parade, we relaxed in the park a little bit and had some ice cream.

Miriam has graduated to being able to have her own ice cream cone (instead of sharing ours) but she doesn't eat it fast enough and it drips all over her fingers or falls off the cone. On this particular day, both happened (and the latter made her cry the saddest toddler tears). 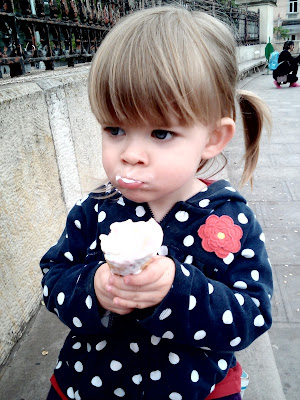 Loïe said…
That's such an interesting holiday to get to see! You're right--the end of WWII would have had such a completely different meaning for Europeans. Seriously, I'd love to read that essay on commemorating the end of wars if you ever do write it. :)

I wonder if there's any research done on the correlation of recent wars being fought in your country and how pacifist the population is as a whole? I started writing a giant comment about the history of war in the US but it was getting into murky territory. Anyway, I think the US's habit of sending soldiers to war in other locations in the recent past could definitely influence citizens' views on war. I haven't thought about the implications on Americans' viewpoints that not having experienced an invasion from another country, with a years-long war sending bombs raining down on your country would have. It's probably hard for a lot of Americans to empathize with the destruction of war. OK, now this in itself is getting too long and murky. Anyway, good thoughts to bring up!
May 27, 2017 at 5:21 PM