He was really shy at first but quickly warmed up to saying "trick or treat!" and was of course more than happy to reach into people's candy bowls for a treat (though more than once he would be reaching for something awesome like a Snickers and then switch at the last second and grab something like Dots instead >.<). 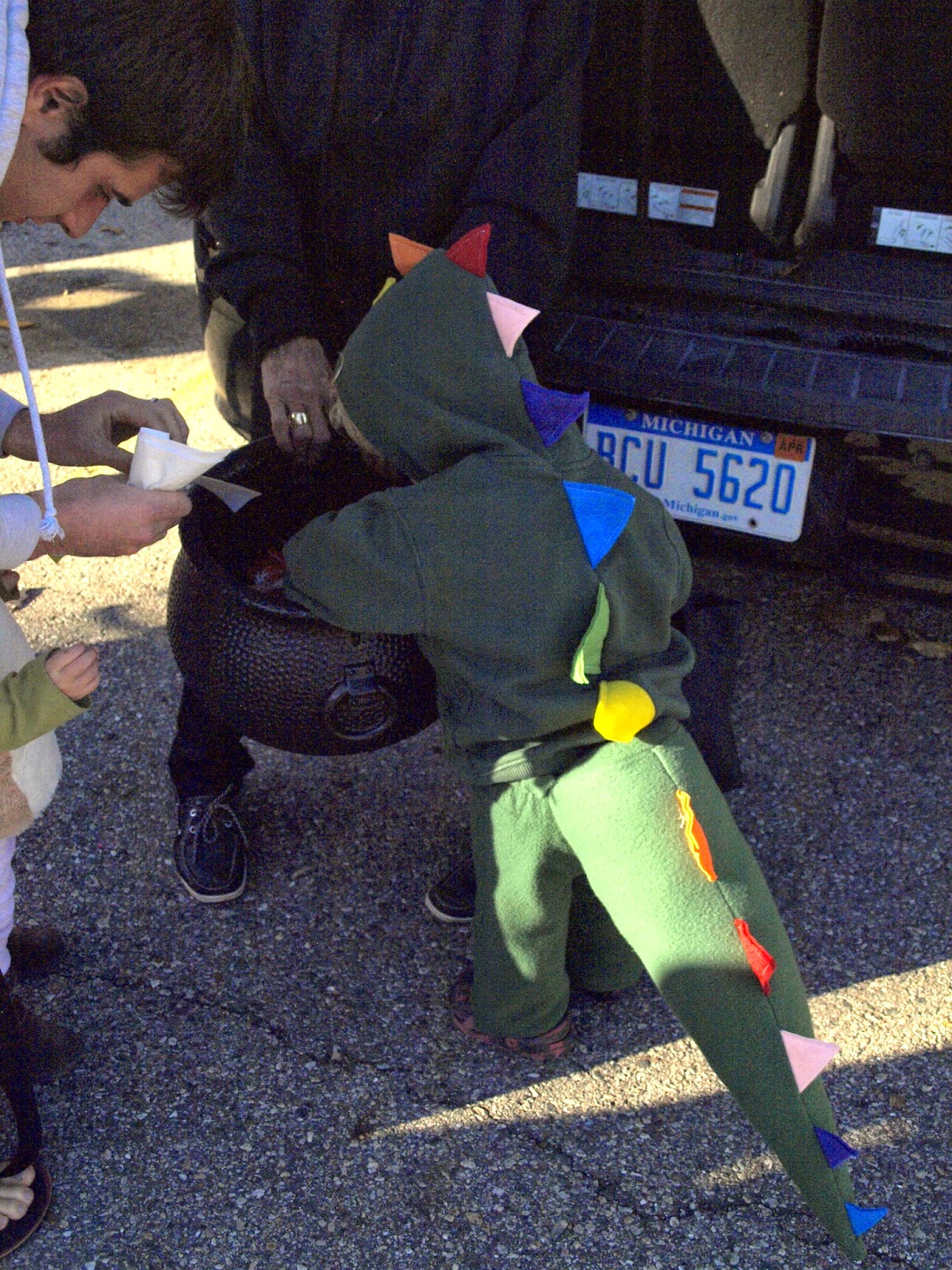 \
At one point he even passed another little trick or treater and happened to see into their little pumpkin full of candy, which obviously prompted him to say "trick or treat!" and try to take some candy from them too! Silly boy :)

In Nikolai's short life, we've never really tried to limit his sugar consumption--I mean, we don't feed him sugar cereal or buy candy/fruit snacks very often, but we're also not shy about baking cookies and other sweet goods and letting him have some. But in all this time, with all his sugar consumption, I had never seen him have a sugar high... 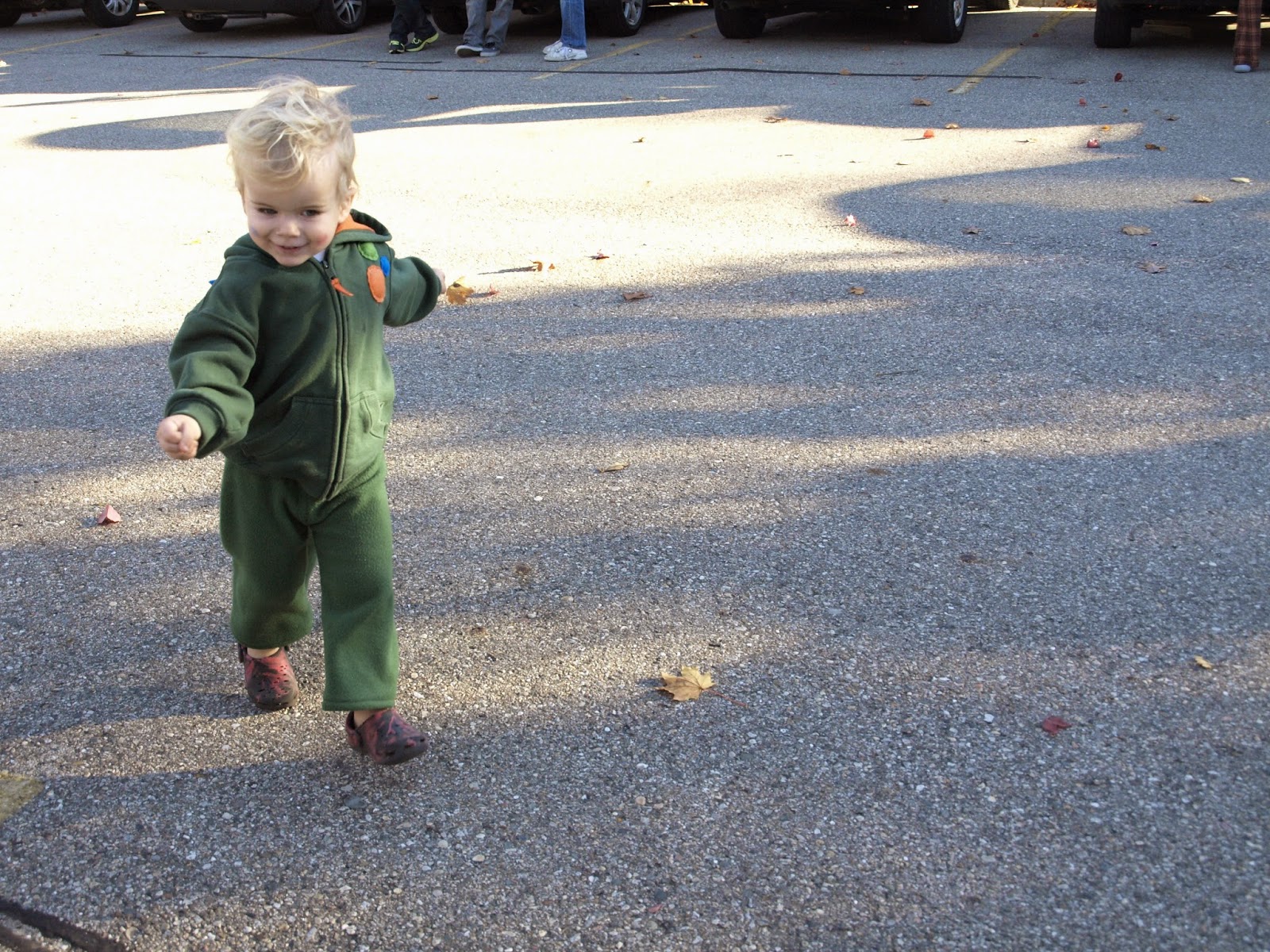 until the trunk or treat! Boy, I swear all he had was a dum dum and some m&ms, but all of the sudden he was off and running around the parking lot, alternately roaring like a dinosaur and then claiming he was an airplane. 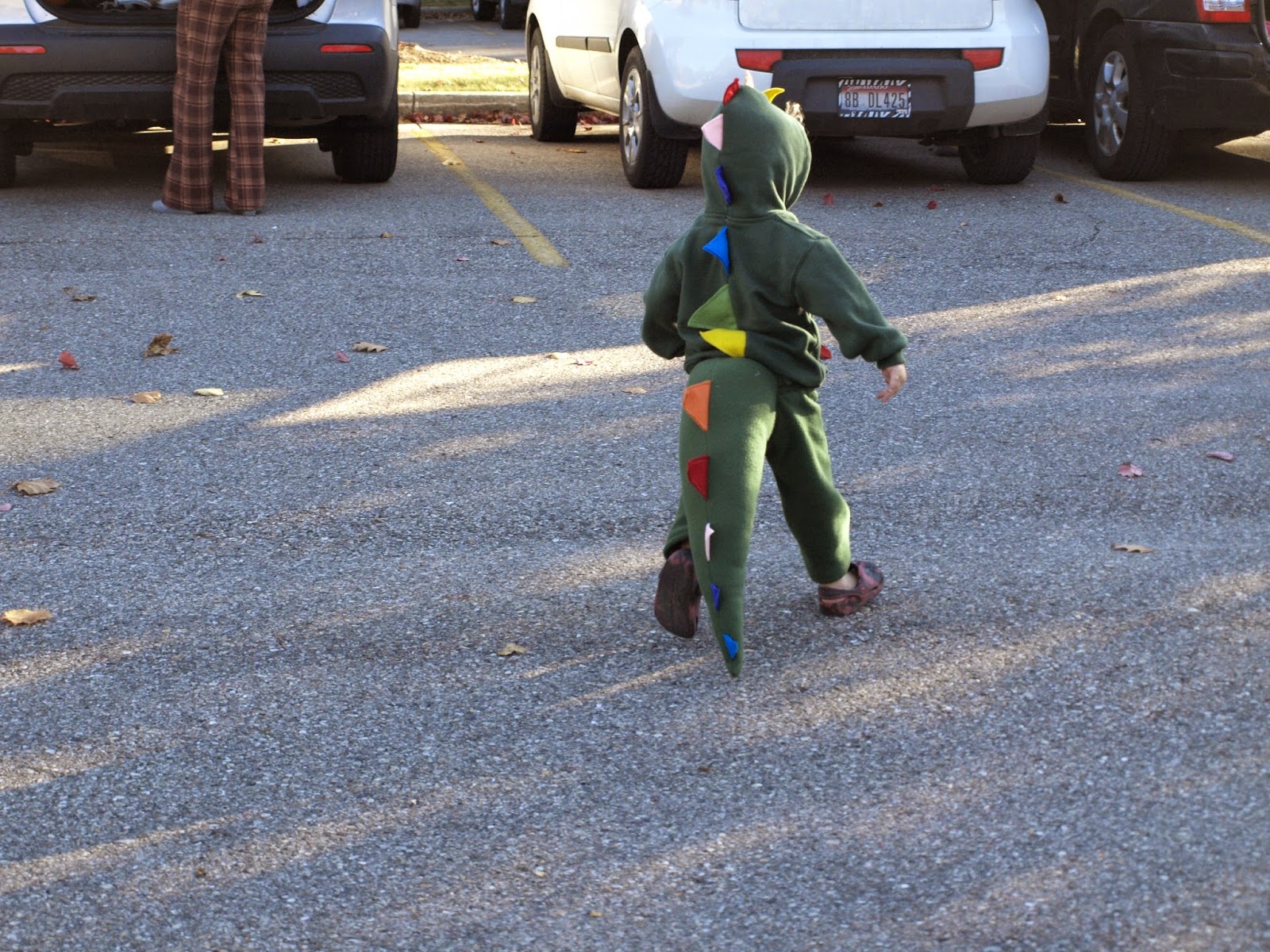 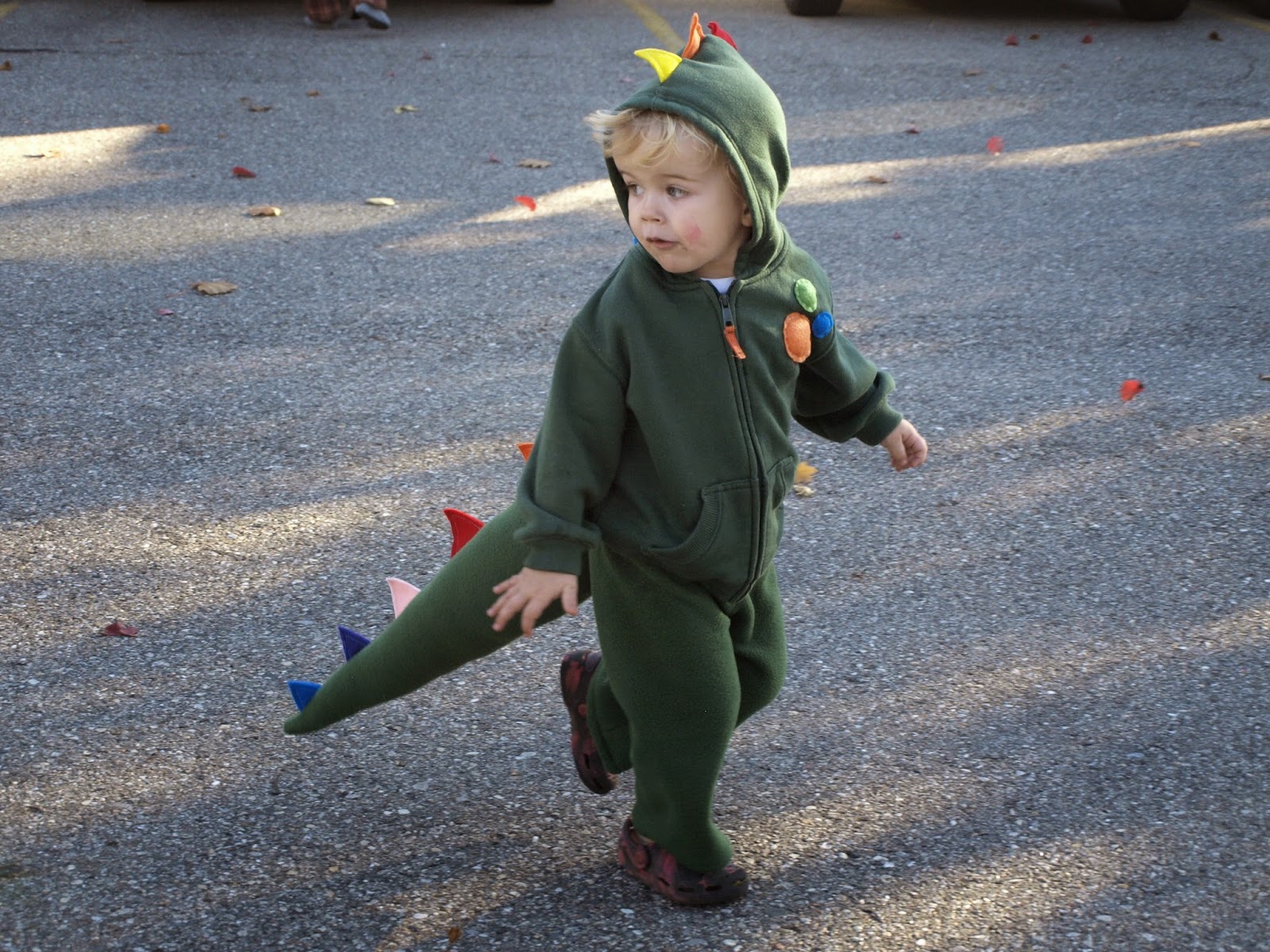 Finally, the rush must have worn off a little because then he decided he wanted to go hide in the trunk and eat his lollipop. 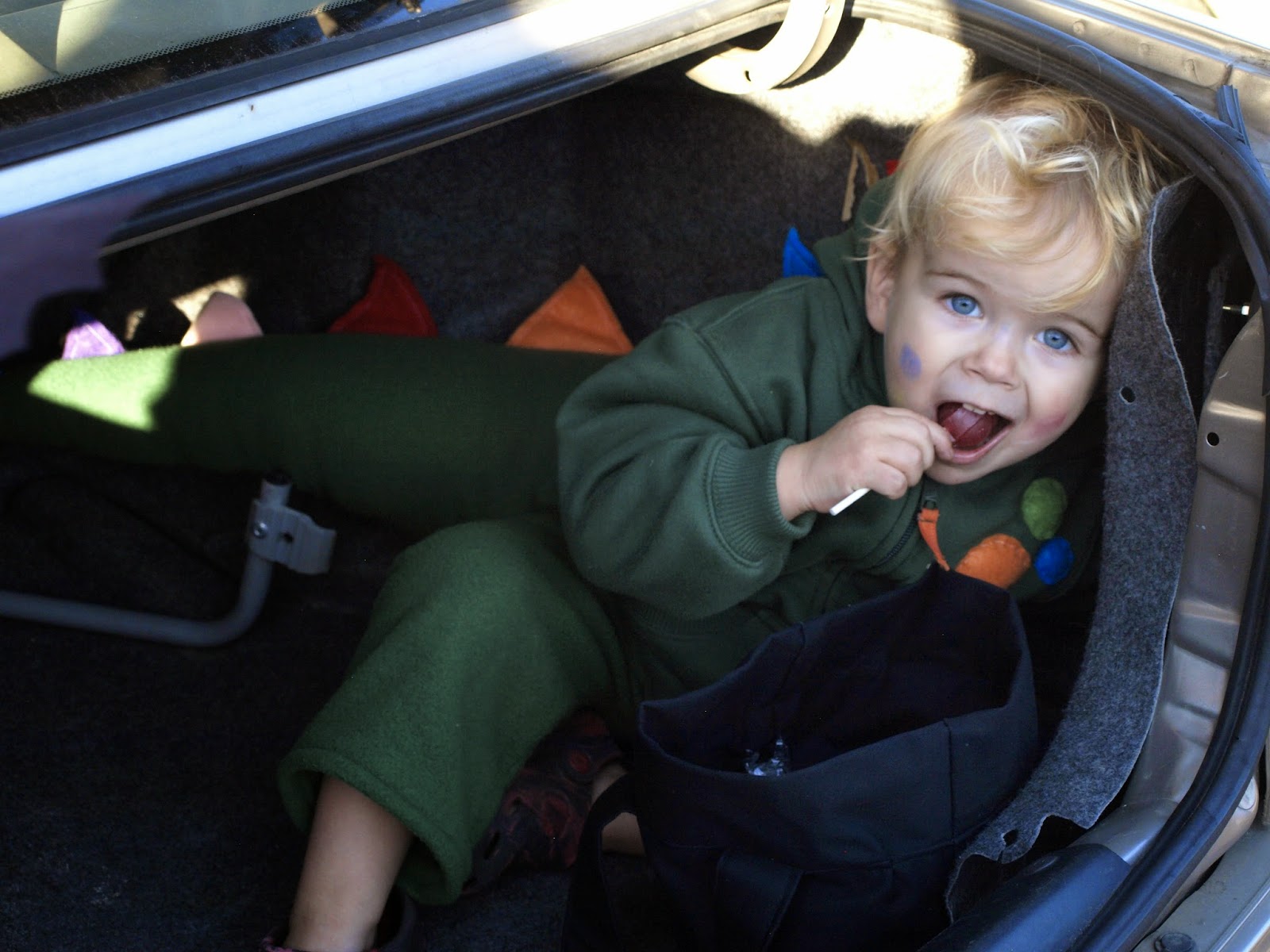 Also, when I see him up there with that lollipop, I can't help but think of him two years ago, tasting his very first one on Halloween: 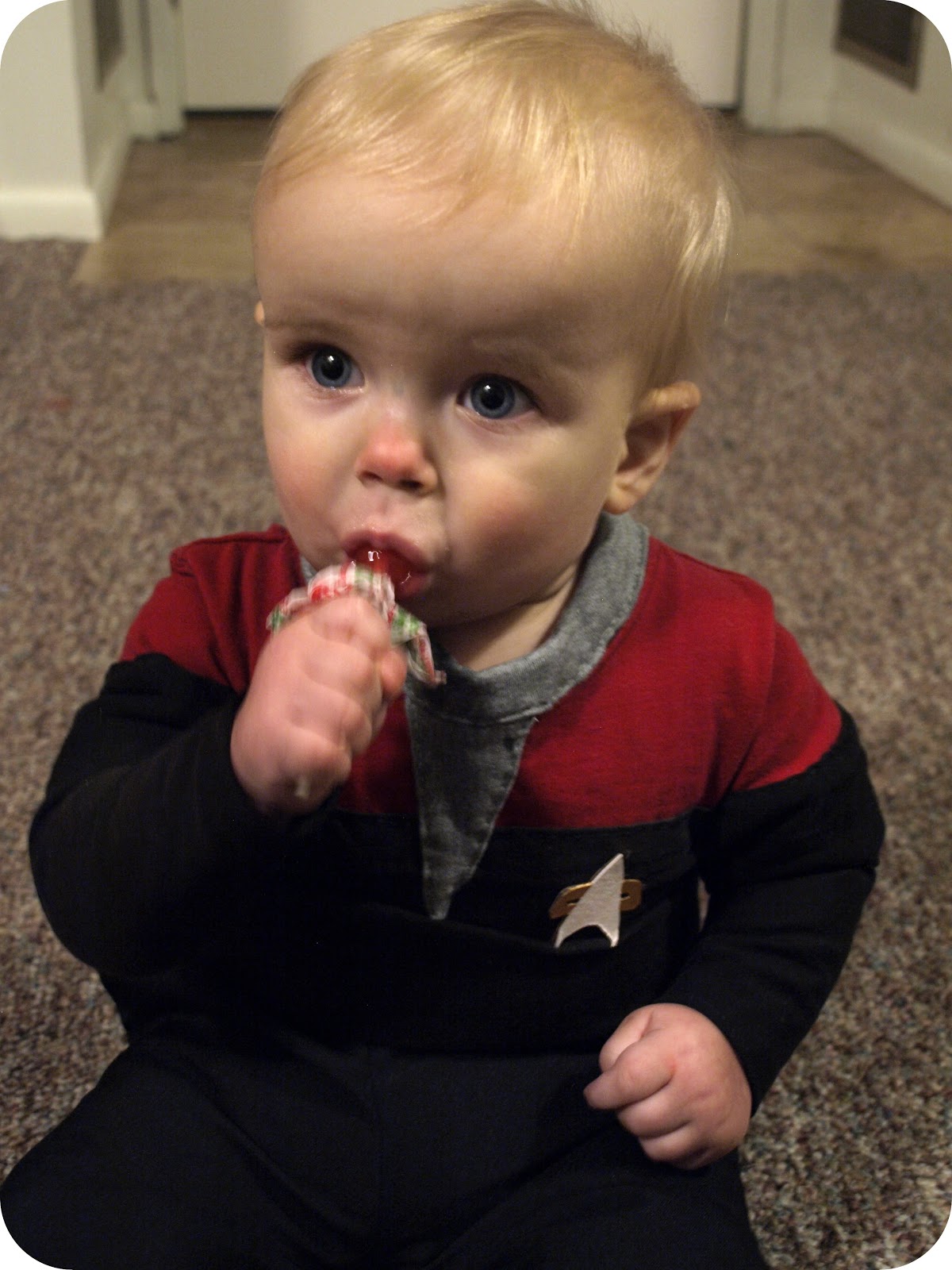 After the sugar rush, he ran off to play with some other little kids who were running around. Jesse was watching him while I chatted with friends, and when I came upon them I found Nikolai playing in the leaves.

And then this hilarity happened.

Takes lollipop out of mouth, decides to try a leaf instead: 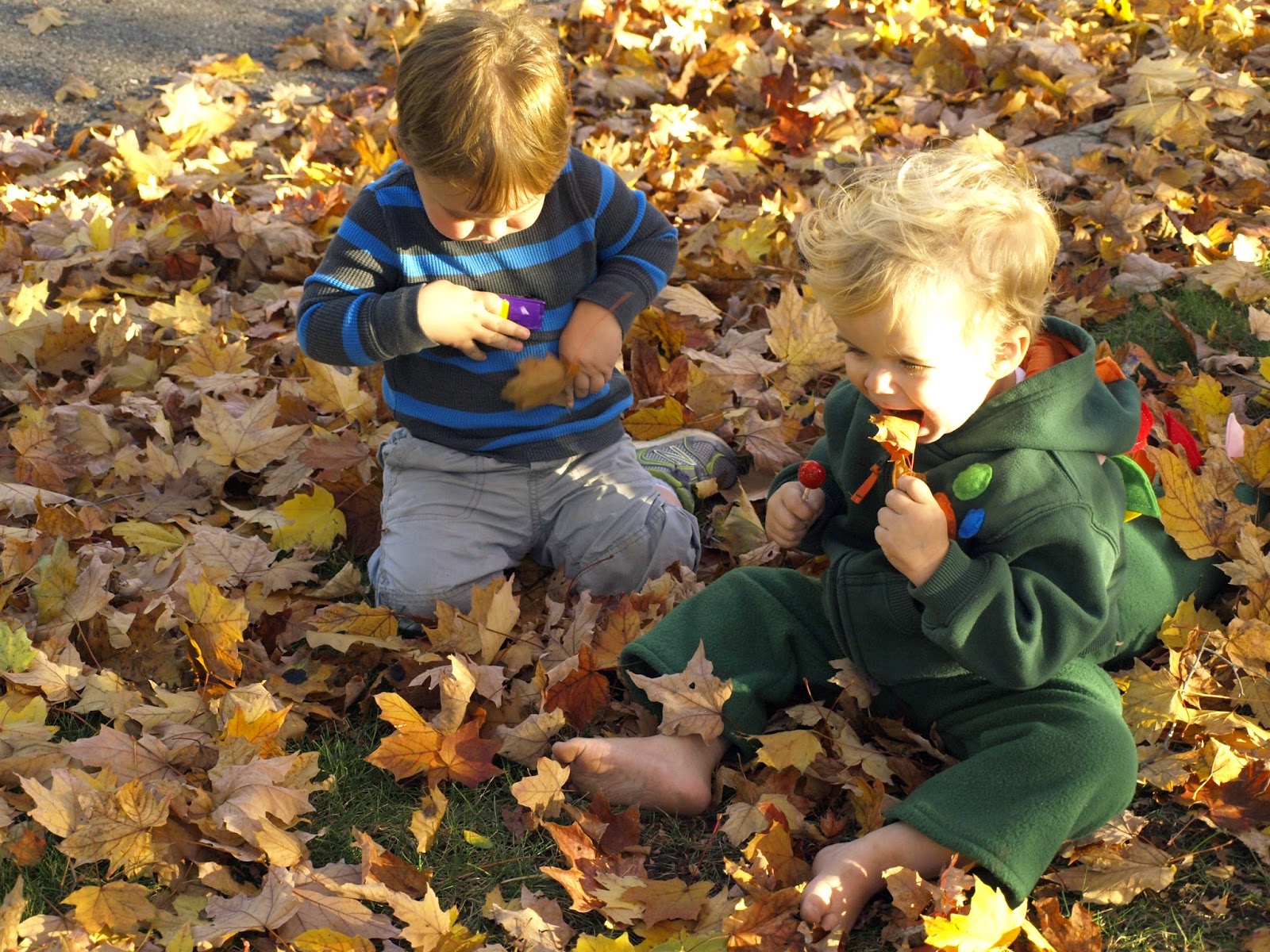 Realizes "oh wait, that wasn't as tasty as I was hoping": 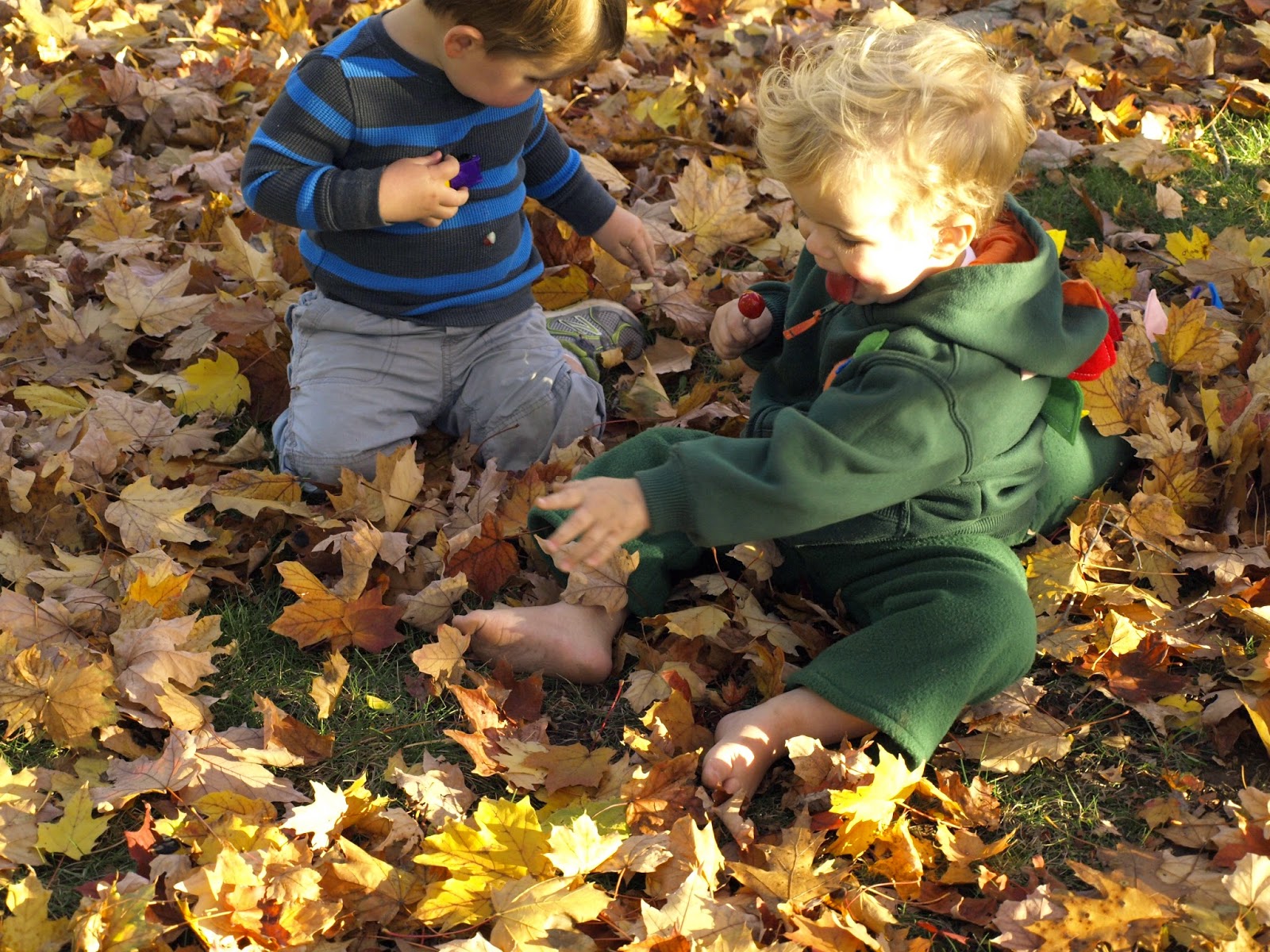 "Yech, that was really terrible. I need to get that taste off of my tongue": 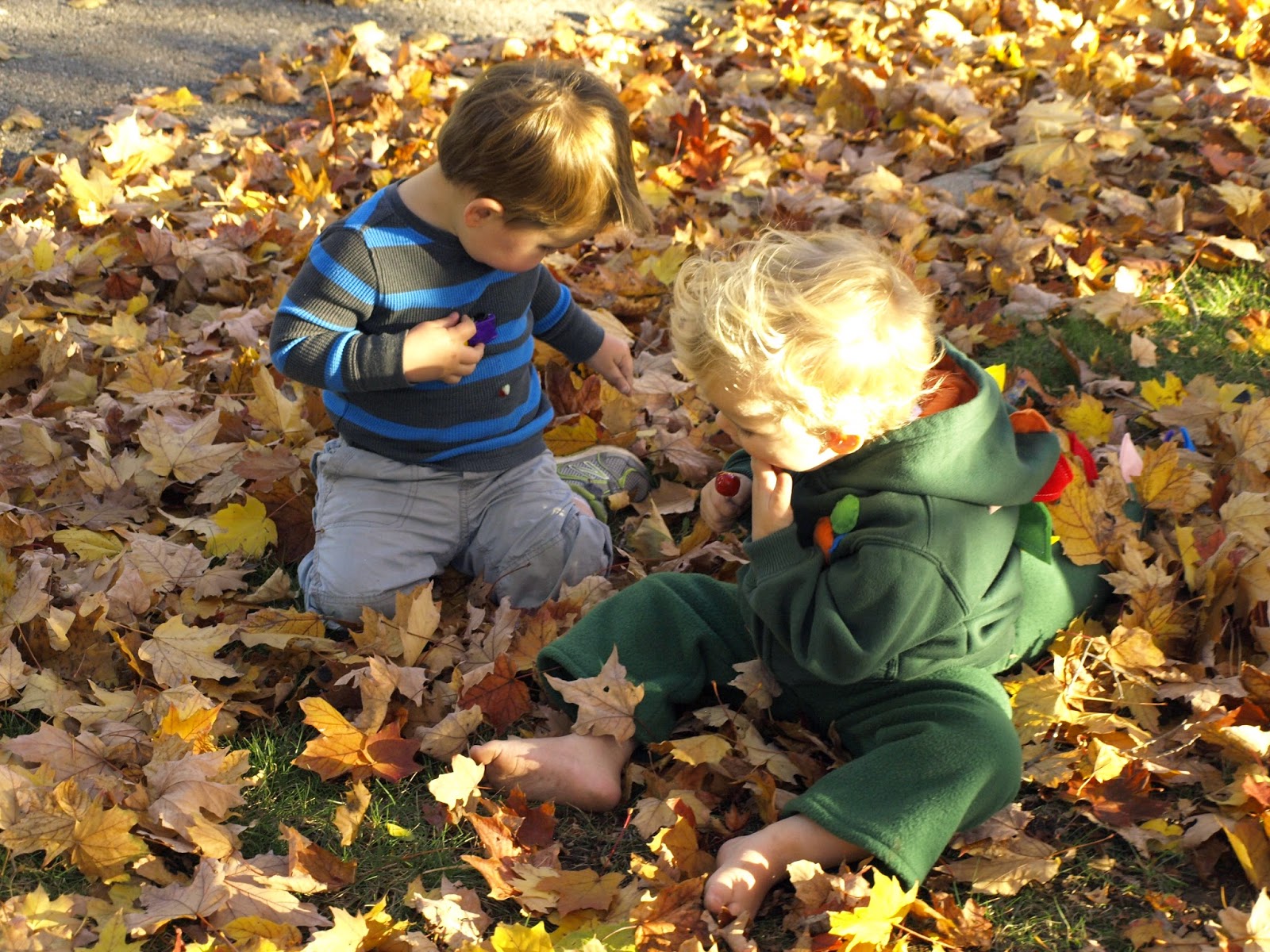 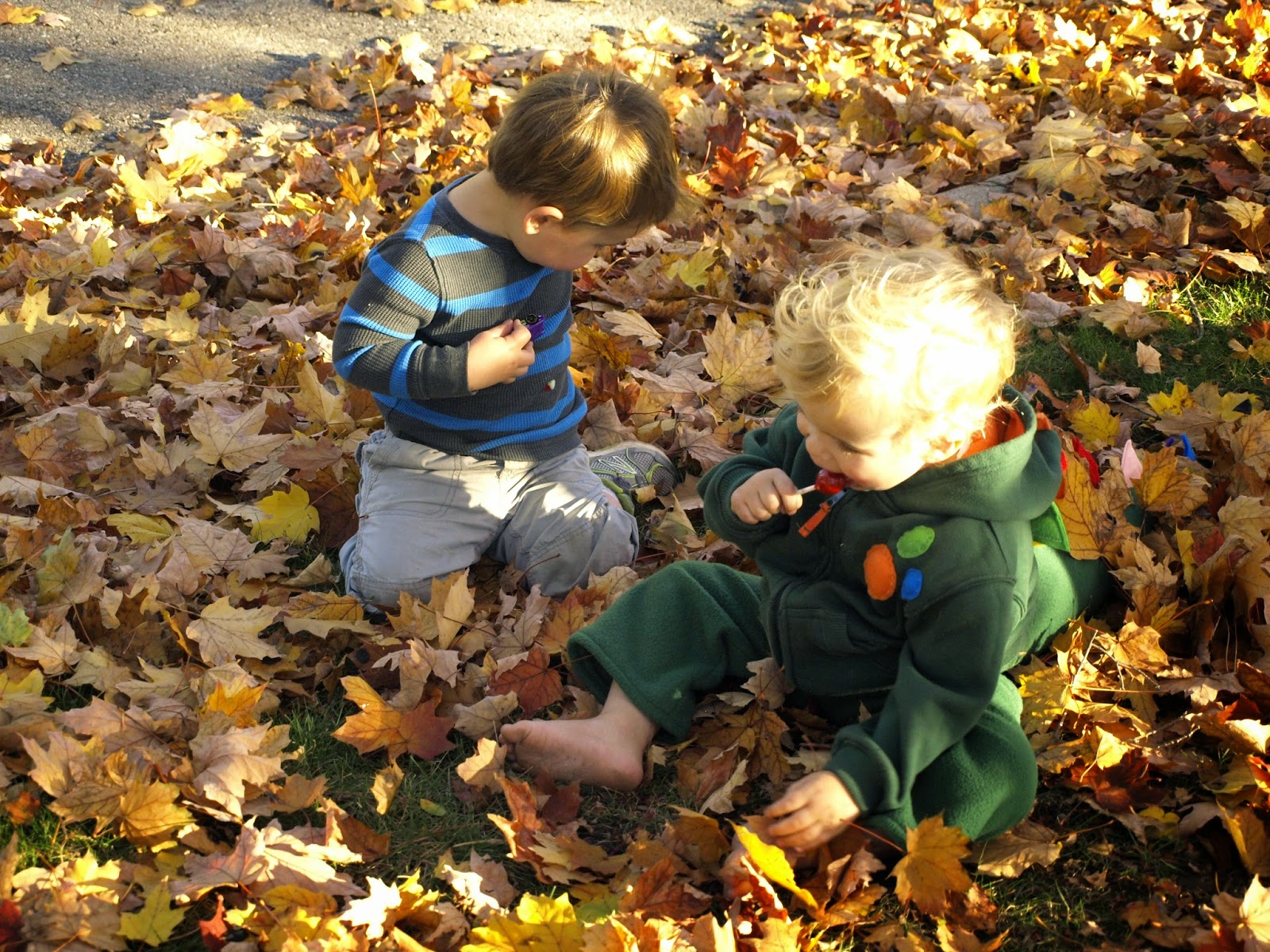 (seriously, I don't think he's tried to eat a leaf in 2 years, and I have no idea what made him think he should try one now, but it was hilarious!)

And here's a shot of all three of us! 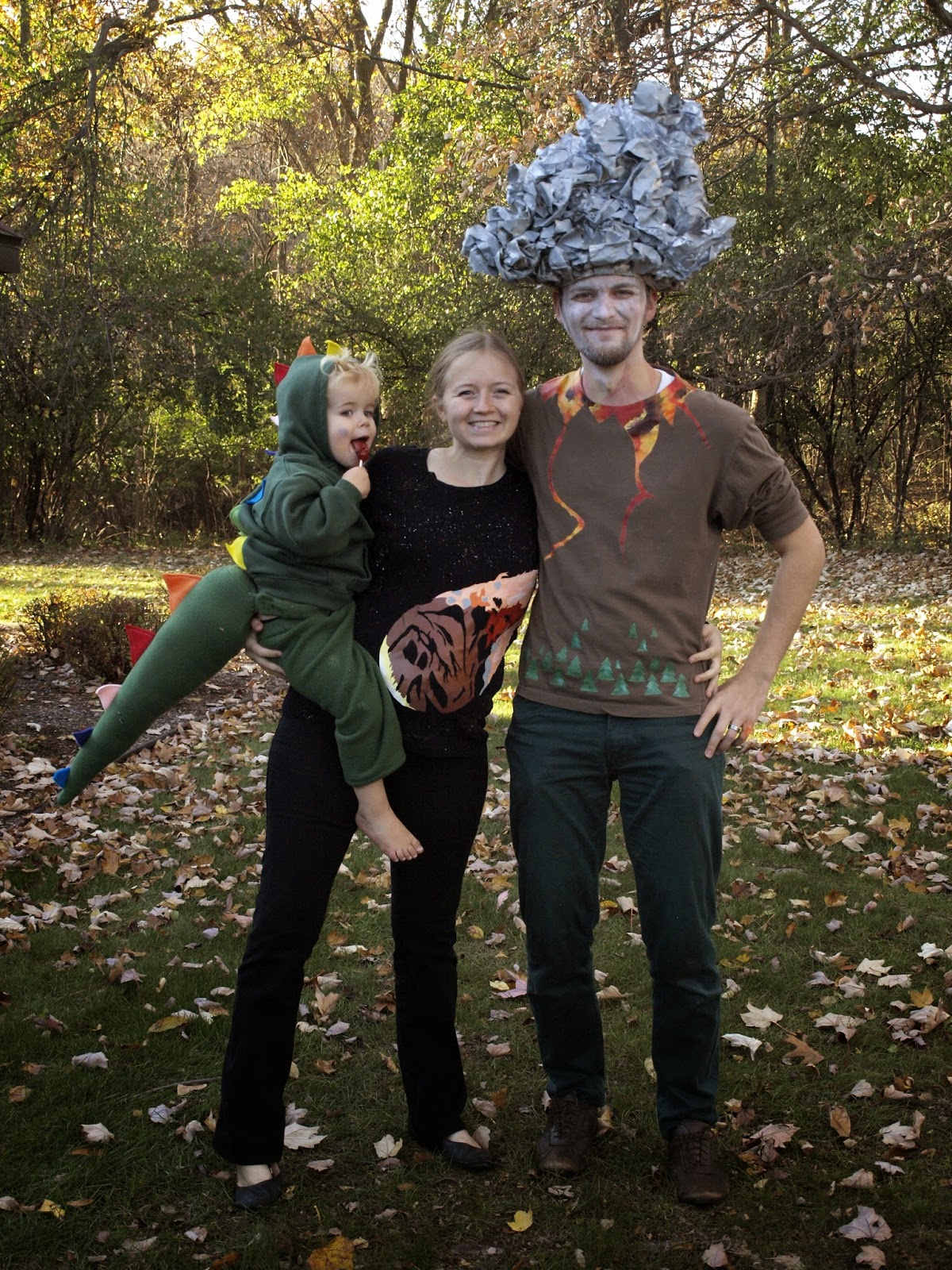 (Please notice that Jesse is a volcano and I am/baby is a comet, coming to destroy our little dinosaur) 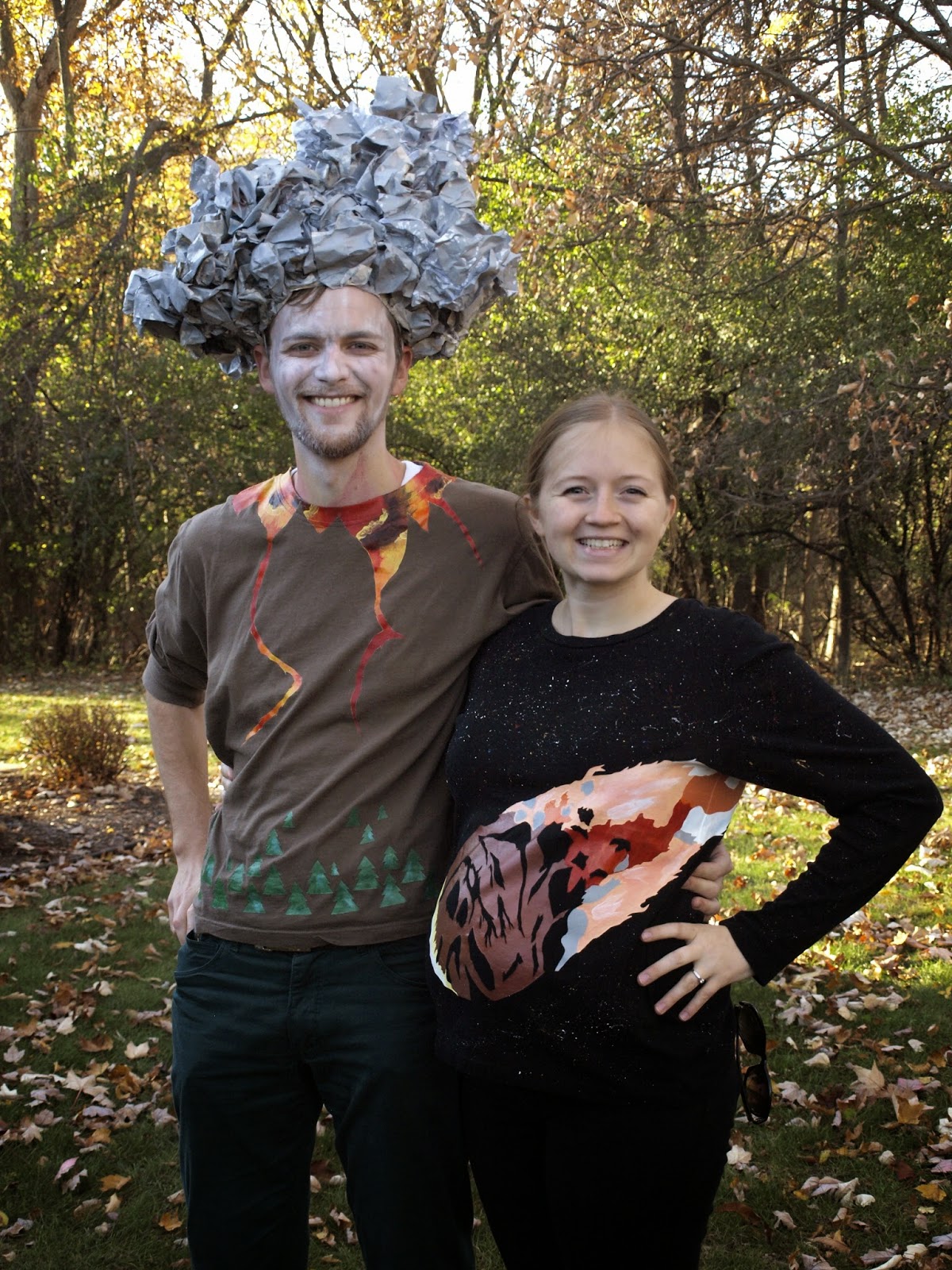 Also, this picture makes me look super duper pregnant, while I am, in fact, just pretty pregnant.

Loïe said…
I love Niko's costume! The little tail cracks me up for some reason. And I love that you caught the moment that he tasted the leaf and then threw it away with your camera!
October 30, 2014 at 4:26 AM