It's possible you know this by now...

But on the off chance you haven't heard already: 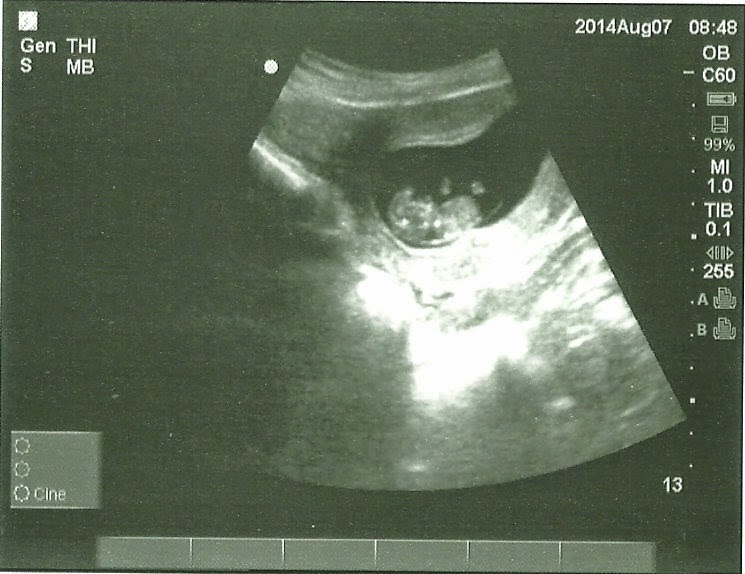 Pictured above is our charming little gummy bear at approximately 11 weeks.

That little pal is also the reason for the radio silence around here lately! I haven't been too sick really--much less sick than I was with Nikolai (which, to be honest, wasn't really that sick), but I have been ridiculously exhausted! (Really, Nikolai spent SO much time watching TV on perfectly lovely mornings this summer because I desperately needed a nap at 9:30 am. Poor lad!)  So we didn't do much that was blog-worthy, and what we did do I didn't have energy to post about. On top of that, I've been trying to keep this secret under my hat until we were ready to tell people, which I think it would have been hard to do if I had been posting all the time!

Anyways, I could probably post a pregnancy picture of myself, but to be honest I'm not really showing yet (well, I'm starting to look a little pregnant, but to be honest, I think the majority of that is just bloating and normal mom-midsection-fat.) So we'll hold off on that for a few weeks.

In the meantime, we're so excited to share our happy news with you, beloved readers (who are, to be honest, mostly family members that knew already) and so excited to make our family a little bit bigger!

Kylie said…
Well I didn't know!!! So thank heavens for the blog! Also: EEEEEEEEEEE!!!!!! Congrats, I am amazingly happy for you. If your journey is anything like mine, #2 will be a lot easier and less of an adjustment. Dah! I think we must video chat you all soon! Congrats again!
August 26, 2014 at 5:44 PM

i'm glad you're not too sick, and i'm also glad that tv exists for toddlers with pregnant moms so they can get their naps.