We were in Moscow for 2 nights but really only had the 1 day to go out and see the city.  We were actually fine with this, though, cause Jesse had never been to the city and so we really only had one day's worth of things we wanted to see--and also, Moscow has a population of somewhere around 16 million people so the city is HUGE and harder to navigate than smaller Petersburg, so really, one day of that craziness was plenty.
We got off the metro to go find Red Square, and quickly came across Jesse's other patron saint, Dostoyevsky! (and according to Jesse, all of his favorite authors have pigeons on their heads!)
(you'll also notice that by this point in the trip we've learned that pictures are more interesting if there's a person in them, so there will be a little more of us from now on) 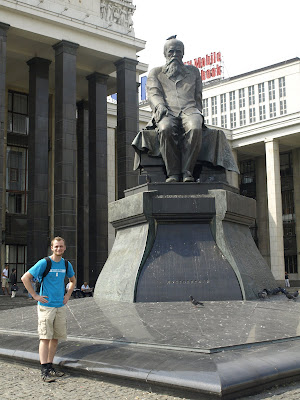 The entrance to the Kremlin! 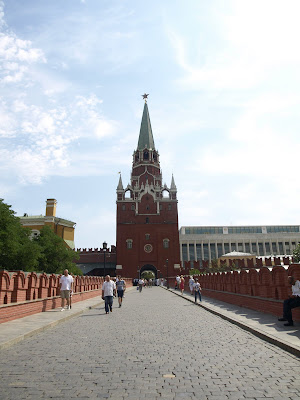 So, despite the fact that that big tower has a plaque that says "Lenin came through here when he came into Moscow in power!" in this weird pseudo-religious way (there was also a big sign like that in the train station...weird) they didn't bother knocking down the 5 or 6 beautiful Orthodox churches right next to their government offices.  Thanks for that, Soviets! Also, there was no photography allowed in the Cathedrals (which I can respect, cause what if a place I considered holy became this worldwide tourist attraction and everyone was all "that's soooo preeetty" and I was all "but it's sacred! quit taking pictures stupid tourist!") so these pictures are all from the outside.  But dang.  They are something special from the outside.  (although let me reassure you, we went in all the ones we could and every inch inside is covered with several hundred year old murals of scripture stories and gilded icons.  it is something else) 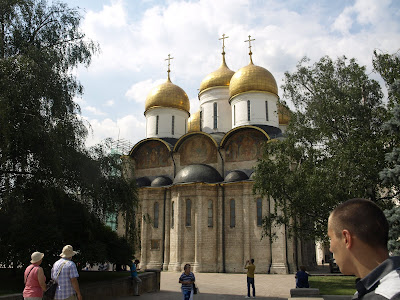 This cannon was just chilling there on the property.  According to Jesse's impeccable memory, this is called the tsar cannon and the barrel was made somewhere in the 1500s.  We're not sure it was ever used in battle, in part because we're not sure how on earth they'd have moved the massive thing! Maybe they were like "hey enemies, could you just come stand over here?  No, a little to the left....back a little....wait no a little more to your right....perfect!" BOOM!  Who knows. 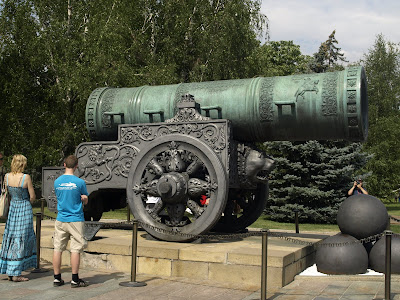 Anyways, the detail was incredible. 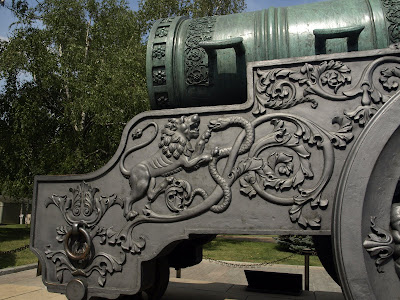 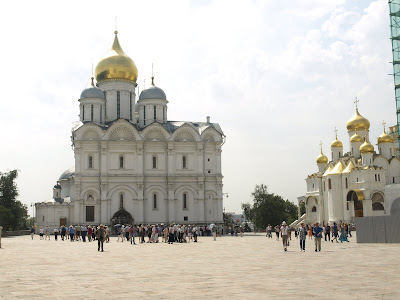 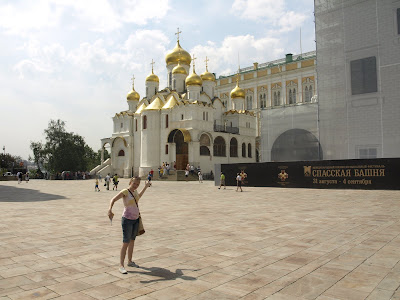 These things were just massive. I'll admit, I coaxed this silly face out of him.  Unfortunately, since he's so close up, it's hard to realize how BIG this bell was! I'm pretty sure I could comfortably live inside it.  Man.  Russians and their massive stuff. 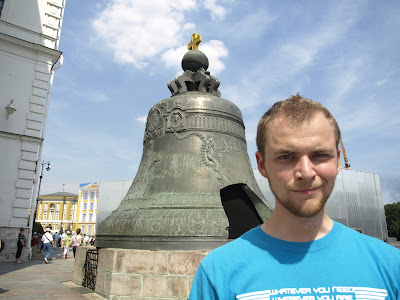 We pretended to be tsars just a little bit. 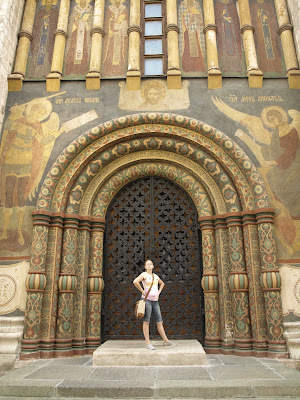 Ok, there's really nothing that interesting here except this: In Petersburg, there were police everywhere, wandering around, maybe or maybe not really working, but if people were sitting on the grass or being hooliganish they'd put a stop to it in a second (even if there weren't any don't sit on the grass signs or whatnot) but here, in Moscow, people were sitting on roped off areas of the grass all the time, and here are some random people swimming in the city fountain! Given, it was really really hot, so I can understand, but it's funny to see that the police didn't bother to stop them.  I'm not sure if the police just figured it was so hot they couldn't blame them, or if there's just physically so many people in Moscow that they didn't want to bother trying to make them all stop misbehaving! 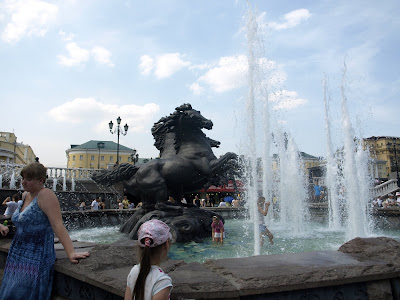 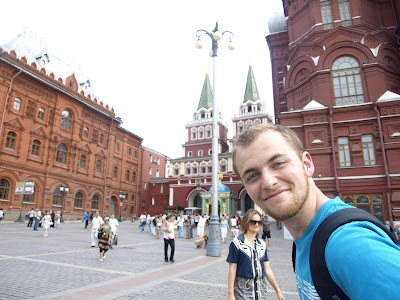 This spot is/was the center of the road system in Russia, and apparently says around the edge "all roads lead to Moscow." Also, if you throw some kopecks over your shoulder it's good luck!
Also, random note about money in Russia: we had an awesome time trying to figure out how much everything costs, since the Rubles to Dollars exchange rate is/was 27.5 rubles to one dollar.  We figured out a pretty good system of calculating prices in our heads, but when we left we did some funny math to figure out how much their coins were worth in American money.  They were as follows:  27.5 rubles= 1 US dollar, so 10 rubles= $0.37, 5 rubles=$0.18, 2 rubles=$0.074, 1 ruble=$0.037, 50 kopecks (there are 100 in a ruble)=$0.018, 10 kopecks=$0.003, 5 kopecks=$0.0018, and 1 kopeck=$0.0003.  Basically, that meant that to have a dollar, I'd have to have nearly 3,000 1 kopeck coins.  Yeah.  Actually though, we found that in shops and such they've stopped giving out 1 and 5 kopeck coins because apparently the Russians have realized they're completely useless too!  I managed to find some to collect in this spot where people were tossing them for luck, and I was quite excited! I do also have a large collection of 10 kopeck coins, which are only worth almost half a cent each...so if you want one, you can have one! 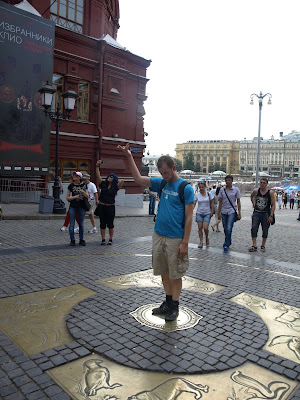 Mooooooving on! This is the sweet Russian history museum we went to! It was, obviously, all in Russian, but I liked to look around anyways and Jesse was able to pretty much translate anything I wanted to know. 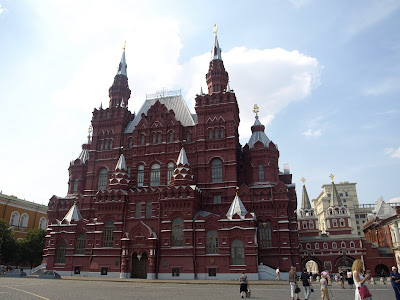 And this is Lenin's tomb!  We wanted to go in and see his preserved body, but apparently they only allow visitors from 11-2 each day, so we missed our window of opportunity.  Dang it! I was morbidly excited to see a man who's been dead for 87 years!  Oh well.  Maybe next time. 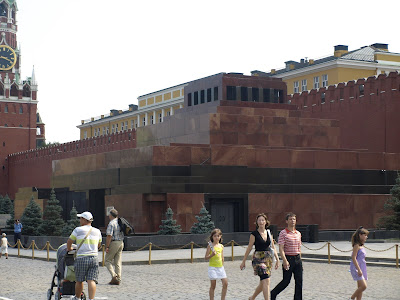 In front of a sweet Cathedral! I was happy, I promise, just sweaty. 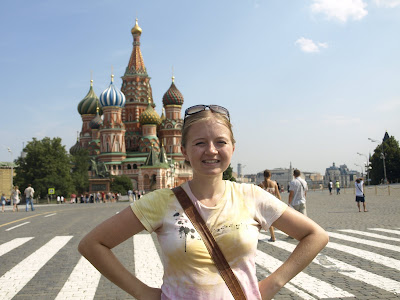 And this is a random entrance to a mall. 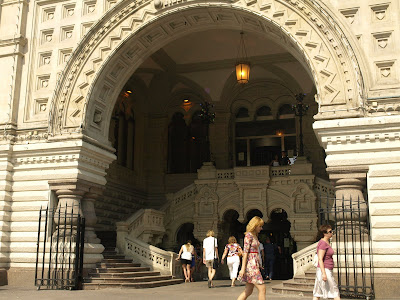 And Jesse with some sweet Soviet era space equipment! Hurrah for space! 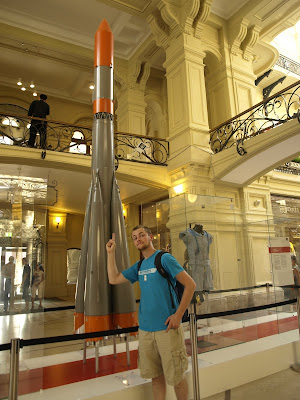 And that, friends, is the last of our pictures from Russia! Tomorrow the bombardment with photos and (brief) stories from Austria will come, and then I'll FINALLY be able to tell you about Germany! Hurrah Hurrah!

Tasha said…
I love these updates. You tell the stories in such a fun way! Can't wait to hear about Deutschland!
August 2, 2011 at 5:46 PM

bRob said…
haha - i know exactly what you mean about carting around useless coins. I have some Czech krones and Hungarian Forints, if you're interested...