I should have written the post about coming back to the US sooner--I'm worried I've already forgotten some of the details! But I'm going to try my best, because I know I'll want to look back and remember.

I packed up all of our belongings back into the 6 suitcases that we brought to Moldova, carefully weighing them all so they were all juuuuust shy of 50 pounds. Unfortunately, our flights back to the US were at terrible times (but then again, when is an international flight with kids not going to be terrible?) The first flight left Moldova just after midnight, so we said a teary goodbye to our apartment around 9 pm on July 31st, piled all of our stuff into a taxi, hugged our kind landlady Tatiana goodbye, and headed out. There were a few snafus at the airport--apparently we were only allowed 4 free bags on the first leg of our flight to Moscow, so we had to pay extra for the second two (I can't remember how much, but it was sort of nuts), but they couldn't charge us for it at the check-in desk, so we had to go wait at some secondary desk until someone showed up to help us, etc. It was a big runaround and the kids were feeling alternately sleepy/zany, but Jesse soon navigated the discussion for us and eventually we were on our way. We got the kids into jammies and brushed teeth once we got to our gate, hoping that they'd feel sleepy and want to lie down a little before we got on the plane, but they were not into that idea. If I remember right, they played at a lego table in the duty free shop until it was time to board, and then we all piled onto the plane.

That first leg left just after midnight, and got into Moscow around 3 or 4 am. And...it was pretty terrible. Niko fell asleep pretty quickly, but Miriam doesn't believe in sleeping anywhere but her bed and wasn't having any of that. I honestly can't remember what we did--I think Jesse and I sort of took turns snoozing for a little bit, and then eventually I think I convinced her to put on her headphones and watch Daniel Tiger. The headphones cut out the white noise from the airplane and then, boom! She fell asleep! So then we all slept for maybe the last hour into Moscow, and then we had to gather all of our stuff and get off the plane.

But in our sleepy haze we made one crucial, vital, horrible mistake: we left Nikolai's treasure Winnie the Pooh stuffed animal on the plane. The very toy that Nikolai had just, the prior day, claimed was his best friend, and stated that he wanted to keep Pooh Bear for the rest of his life. Gone, on a plane in Moscow. By the time I realized it, we had been off the the plane and half snoozing in the terminal for an hour and a half, and I felt awful. Jesse went off on a wild run to see if he could find a lost and found, only to discover that the lost and found was on the other side of the international/national terminal boundary, and crossing to the other side would require a Russian visa to even see the lost and found. We briefly considered whether or not we knew anyone in Moscow that could go to the airport and look for it for us, before realizing that that was more than a little hairbrained. We determined not to tell Niko of the incident until we decided what to do about it, because there was nothing we could do in the moment (side note: I ended up ordering a new one on Amazon, but it was much bigger than the original, so we didn't even try for a bait and switch. We ended up telling him the truth and praying that he'd accept the new Pooh, and he amazed us by grabbing the bigger Pooh bear and telling us that this was the same Winnie the Pooh but he had come back a little more grown up, just like Niko was bigger now than he was when he first got Pooh bear. It went much better than we expected!!!)

We spent a few morose hours in the Moscow Sheremetyevo airport before taking off for NYC around 9 am Moscow time. That flight was somewhere around 9 hours, I think, and not nearly as bad as it could have been. We were all pretty exhausted and slept off and on, with the exception of Miriam, who I think only slept one time (again when I convinced her to put some headphones on and watch something). I don't remember much about the trip, other than being glad that we had 4 seats and could take up an entire row, which we turned into our own little area. 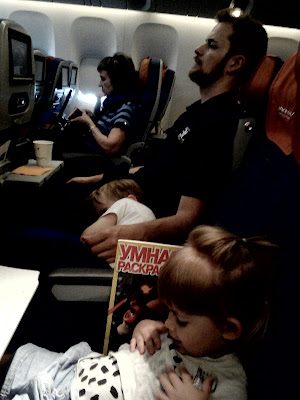 Despite having been on the plane for ages, it was only 2 pm when we got to JFK. We had a long time before our next flight, but most of that was taken up with deplaning, going through border control, gathering all of our suitcases (they were all still there!), transiting to the terminal for our next flight, checking everything back in, and getting to our new gate. I remember going to get some McDonalds for dinner (??? What meal were we even eating at that point?!?! By then it was midnight Moldova time and we had been traveling for 24 hours, but it was 5 pm in NYC so we called it dinner) and being just awake enough to get there and get the food and get back.

And finally, we were on our last flight! We were headed to see my family in South Carolina (by way of the nearest airport in Charlotte, NC), where we would have a soft landing spot after our long voyage. I remember so little about this final flight. We were all so tired by this point, I have no idea what we did. Maybe we slept? Maybe the kids were pretty awake by then and watched shows while Jesse and I crashed? I have seriously no idea. But luckily it was a short flight (somewhere around 2 hours, I think), and before we knew it, we were in North Carolina. 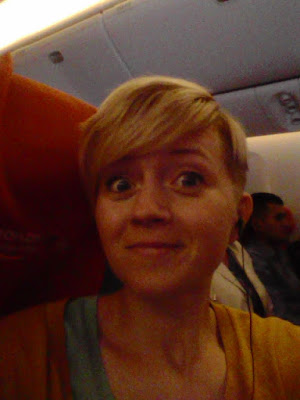 At the baggage claim, my parents were waiting for us, and we were so excited to see them (and all of our six suitcases, which had survived yet again. Can you tell I'm paranoid about losing one of them on a flight?) It was so good to see some friendly faces after such a long trip (and after a year of not seeing them). Everyone but me, my mom (who was driving) and my dad fell asleep in the car on the way to their house in SC. My dad and I talked for most of the 2 hour drive (at 9 pm EST) and I remember asking him a few times "Is anything I'm saying making sense? Am I finishing my sentences? I'm so tired I can't tell." He assured me I was, but I'm still not sure. I was sooo tired!

And before we knew it, we were tucked into hotel beds, having the best sleep ever.

Maren said…
Wow! What a marathon. So glad to hear about the successful Winnie the Pooh switch. That must have made your layover so much more stressful.
September 23, 2017 at 11:00 AM