When in Rome, Part 1

Since arriving in Moldova, I knew I wanted to take a trip to somewhere in Europe. We didn't really know how to choose though! Everywhere we thought of sounded great--how about Scandinavia? Or Berlin? Maybe London? Sure! They all sound great! But narrowing it down was hard. If we choose Norway, am I going to be sorry we didn't go to Berlin? Etc. I knew we'd probably only get to take one trip (yay for fellowship finances), so I wanted to choose carefully.

Then, lo and behold, sometime early in 2017, we found out some much-loved friends from our early days in Ann Arbor were making a trip to Europe! At first they lamented "Oh, too bad we'll be in Western Europe--so close but so far!" But then I had the thought: what if we meet them in Western Europe--specifically, Rome?

And thus, the beginnings of our trip to Rome began!

*note: our friends like to keep their names private, so I'll be referring to them by the first letter of their names--M is my friend, P is her husband, and R and E are their sons*

But first, there was planning. SO MUCH PLANNING. Sure, there was plane tickets and AirBnBs and all that, but there is so much to see in Rome! And thus began an epic spreadsheet and google maps combination filled with advice from travel books, blogs, and a great friend who lived in Rome for a semester.

Below is the epic google map I made. It has everything we were interested in seeing, doing, or eating, mapped and color coordinated by type (and yes, in case you're wondering, gelato got its own colored flag). I know that seems like overkill but it is DEFINITELY NOT. Roman streets are tiny and crazy and nuts and it is so easy to walk down a block and not realize there is something amazing on the other side of it. I mean, the freaking Pantheon is smooshed in between a lot of buildings, and you could easily miss it!

Having everything mapped also helped because we could plan to see several things in the same area at a time, thereby not having to bump around from one area to another. 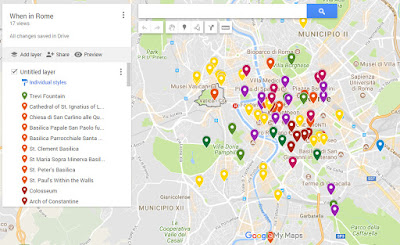 Also, here's something funny about Rome--there is so much interesting and historical stuff smooshed into a little spot in the city center (I think it's only a few miles) but it definitely doesn't feel like everything is that close together once you're there. I think this was from the combination of the heat, other tourists, and the ever present hills and cobblestones. But really, there were things I had planned out ahead of time thinking, "Oh, it won't be a big deal to walk over here to get pizza. It's only .5 miles!" But on the ground that distance was sooo far. And hot. And crowded. And confusing ("Wait, what street are we on? What is that one? Where are we?!") So pretty early on our plans changed a lot as we narrowed our range of what was within "walkable" distance.

Ok, I really want to get into more details/thoughts about traveling with kids, etc, but I'm planning 6 more posts (one for each day we were there--and I know that sounds like overkill but there's too much to post about!) so I'll make sure to get into it later.

We were lucky that a cheap airline has direct flights from Chisinau to Rome (around 420 Euro for 4 seats, round trip), and it was a really smooth trip. Once we landed, we found a bus that went straight to the central train/bus/metro station (which I had looked up online ahead of time). 45 minutes later, we got to the bus station and bought week-long transit passes (24 Euros each and kids were free, but we used them a ton--totally worth it) and found the bus to our AirBnB. It was a little tricky navigating without cell phone data (how did our ancestor's do it!!) but we found our apartment soon enough! 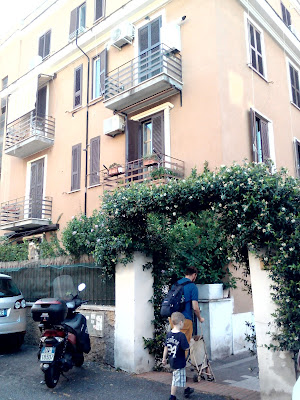 After that it was off to find our friends! They were staying in a more central location so we went to meet them (again, tricky without cell phones!) Niko and R were friends when they were 18 months old but haven't seen each other since, so it was fun to reunite them. 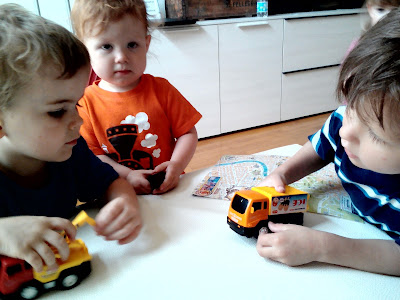 After that we waited for a bit for P's uncle Vincent to arrive. Vincent just so happens to be a Catholic priest and has lived in Italy for nearly 20 years (some of which was in Rome), so he came into town to show us around. He was an incredibly knowledgeable tour guide and made a huge difference in our understanding of our surroundings. Rome is covered in so many layers of history that it's easy to look at something and ooh and ahh but have no real idea what you're seeing--Vincent being our tour guide helped fill in the gaps and gave us a much fuller picture of the city.

Our first stop on our foray into the city was the Trevi Fountain, but first I have to show you the intense amount of people that were there: 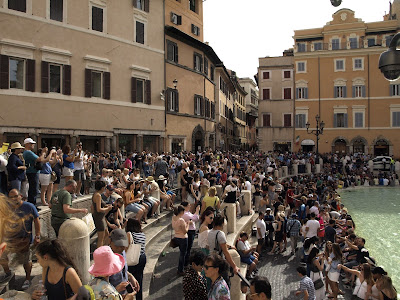 Wow, right?? And then here's the fountain itself: 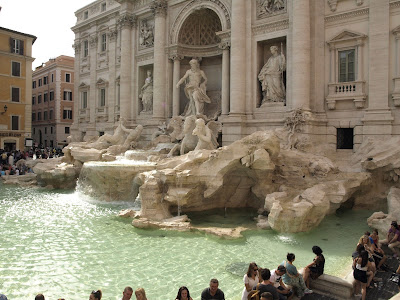 I'm probably going to say this a million times (because I feel this way about basically everything I saw in Rome), but this fountain was seriously impressive in person. The way the rocks look like they're coming out of the side of the building is beautiful, and the sheer size and scale of the fountain are incredible.

We were off again soon enough, and soon we were spotting SPQR labeling everything. SPQR stands for "Senatus PopulusQue Romanus," meaning "The Senate and People of Rome." It began to be used around 80 BCE, and is still a symbol of Rome. 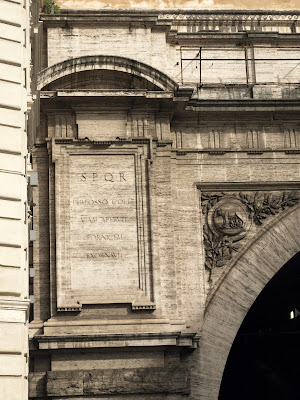 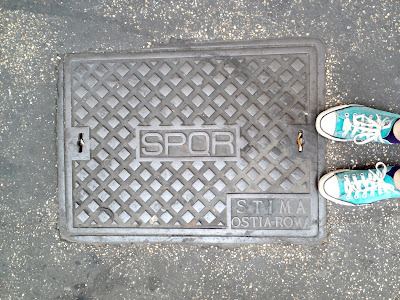 Next we walked to the Chiesa di Santa Maria della Vittoria (Church of our Lady of Victory). It is dedicated Mary, but is most famous for the sculpture Ecstasy of Saint Teresa by famous sculptor Gian Lorenzo Bernini. This is one of those pieces that I saw pictures of in in an art class in college, and man, was it cool seeing it in person! 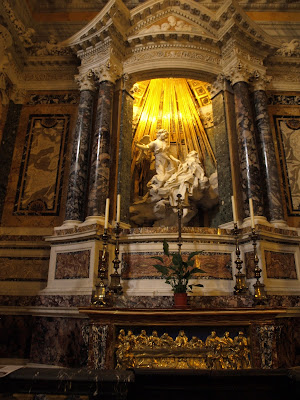 Look at those ceiling frescoes! Wowza! 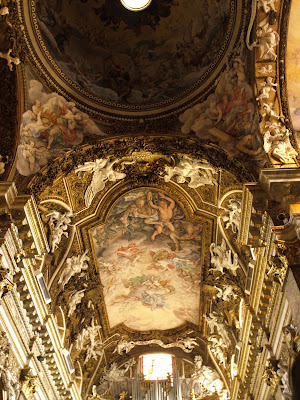 This piece over the altar was really incredible too, and the way it caught the light was amazing. 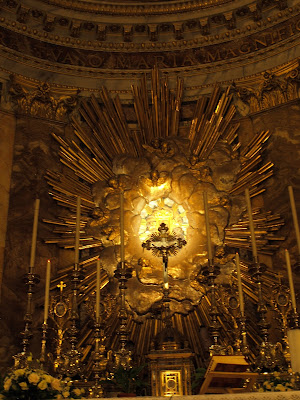 Now I bet at this point you're thinking, "Cool church Catherine! But what were the kids thinking about all of this?" 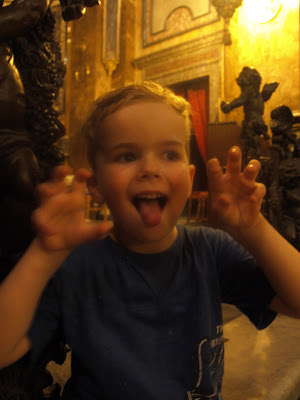 Ok, but actually Niko and I had a really cool moment in this church. He was feeling pretty bored and left out, but then I took him over to the front of the church and we started talking about the beautiful piece over the altar. "What does that look like to you?" I said. "The sun," Niko replied. "And what's in the center?" I asked. "A cross," he replied. And then we started talking about how the golden rays come out of the cross, a symbol of Jesus, and how Jesus is compared to the sun a lot. After that we looked at the ceiling and tried to see what we could spot.

It took a little more effort than usual to engage him and make this place interesting for him too, but it was really, really worth it. And bonus: I noticed details I wouldn't have either. I think, as a tourist (especially one with small kids), it's easy to snap a picture and think you've seen what you came to see, without really noticing interesting details. But taking time to experience it with Niko gave me a chance to notice things. This was something I really enjoyed about our trip overall.

Speaking of noticing things: Niko has a small obsession with Egypt, and we loved spotting things around Rome with hieroglyphics on them (I think some were created in Rome, but many were from some historical sacking of Egypt). 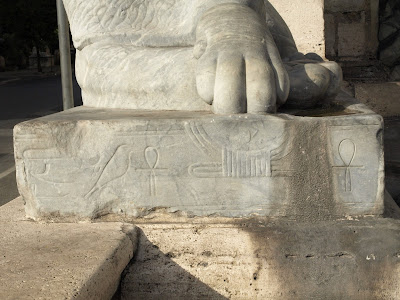 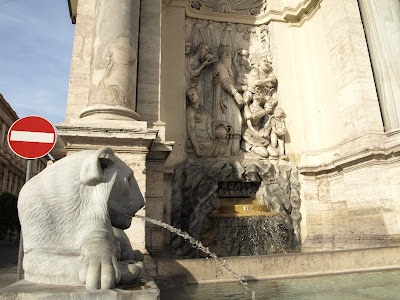 Another time I tried to engage Niko (who I think at this point was feeling hot, hungry and tired of walking) was at the Piazza della Republica. We were walking past but stopped to look around, and Niko began to complain that he wanted to go home. So I noticed this fountain, and started to talk to Niko about it. ("What do you see? What's happening? Why do you think it's happening?" etc) We ended up having a fun conversation about why the man was wrestling the fish, and why the fish was spitting water (and I may or may not have flailed around like a captured fish). 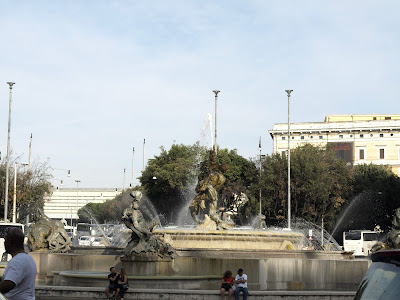 I was not good at this the whole time we were in Rome (there were definitely times where I was feeling hot and tired and wanted to/did shout instead of engaging him when he complained) but the times I tried this were rewarding, and I'm trying to remember them!


Oh, and here's a picture of our whole group! (sans Miri, who was hiding in the stroller behind Jesse) 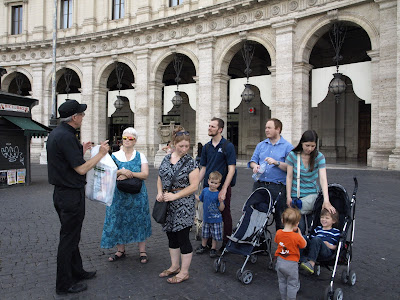 We stopped for the day in front of Basilica di Santa Maria Maggiore, and I took some fun pictures of the kids while we talked about when to meet up the next day. 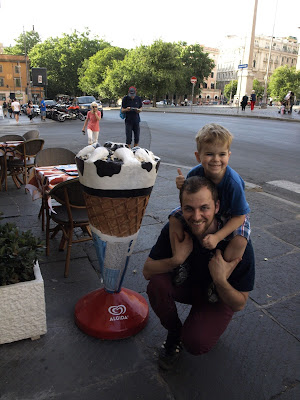 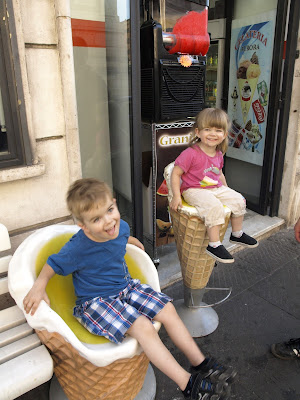 And then we waited for the bus to come so we could go to our apartment! (I have included this picture in part because we did SO much waiting for buses/metros in Rome!) 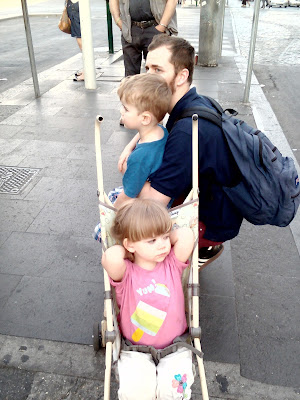 Stay tuned for more the rest of this week!

ivrcti said…
You're right, trying to help a child engage in a piece of art can force you to look more closely than you might otherwise have done.
June 21, 2017 at 8:30 PM

Maren said…
Okay, the Google map is genius. I wish I had done that. I was so turned around in those streets. If I go back I'm going to have a map dedicated solely to gelato.
June 27, 2017 at 2:28 PM

Loïe said…
So awesome! Too many things to name that are awesome....And I've got to say, I didn't think anything you mentioned was "overkill" and wasn't expecting the disclaimers! I would have made a map like that too! :)
June 28, 2017 at 1:44 AM