When in Rome Again: Day 6

On the morning of our penultimate day in Rome, we ventured out to the Appian Way, the ancient road connecting Rome to the coastal city of Brindisi (more than 300 miles away!)

On the way there, we had an exciting adventure* at a bus stop. We were waiting next to the Circus Maximus, having gotten off one bus and waiting for another. Miriam was walking along a fenced in ledge, carrying her little stuff Rhino named Oscerous (pronounced "osser-russ" after how Miri first started calling it). And then, she accidentally dropped Oscerous inside the fence, down the ledge--probably only a 2 foot drop, but completely inaccessible, and absolutely devastating to poor miss Miri! Jesse ran around looking for any kind of entrance that would get him over to the little rhino, with no luck, so instead he brought back tree branch, hoping to pull it up that we. We tried that for awhile, with no luck, and were beginning to try to think of ways to convince Miri to leave the toy behind. But then, I happened to notice that I could pull the branch apart to make two branches of similar length, which I then used as a hilarious pair of chopsticks to retrieve Oscerous.

Honestly, I wish I had photos of the whole affair because it was pretty hilarious (certainly the young Roman woman who was also waiting at the bus stop had a hard time holding in her amusement at our antics). But I will admit, it felt pretty satisfying to return Oscerous to Miri's little hand (and we certainly kept closer watch on it after that!) 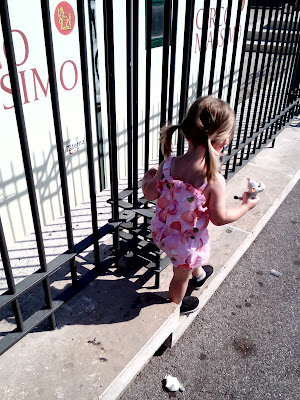 *Isn't everything with kids an adventure? (good or bad?)
The modern Appian way has been re-cobbled (I was going to say repaved, but it's made of cobblestones...) a few times and is open to cars and buses during the week, so we walked along side it on an alternate pathway for a while. It was a little hard to find at first and I may or may not have had a heat-induced minor breakdown, but soon we found the path and had some water and snacks, and then all was well again.

There's all kinds of cool facts about the Appian Way, like it was begun in 300 BC, but you can read more about those on Wikipedia. But here's a few other interesting ones:

The story goes that this is the road where St. Peter, while fleeing persecution in Rome, met the resurrected Jesus. There's now a church on the spot where this encounter supposedly took place (I say "supposedly" not intending to slight any believers, but because after 2000 years it's frankly hard to get an exact location correct).

The Appian Way is also interesting because, for a long time,* it was forbidden to be buried inside of Rome. Christians were opposed to the common Roman practice of cremation, so many of them opted to be buried outside of Rome, along the Appian Way. As such, there are a ton** of catacombs along it, with some housing the remains of famous saints.

*to be honest I have no idea how long

We spent most of our time at the Circus of Maxentius and the accompanying Tomb of Romulus.

The circus is named after the Emperor Maxentius, who built it and an accompanying palace around 300 AD.

The circus itself was a giant racetrack that held 10,000 people. I love that the big towers on the sides are still standing after so many years. 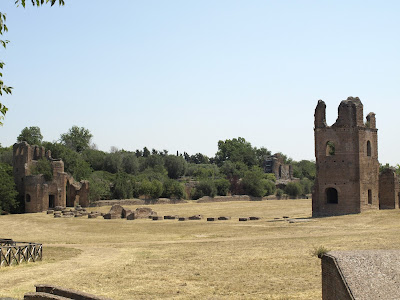 In between the towers you can see the starting gates, where racers would have waited. 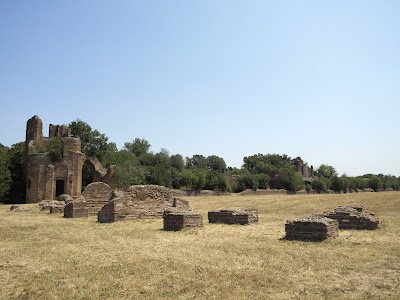 Oh, I forgot to mention the coolest parts about the Circus of Maxentius: it is completely free (donation suggested) and you can walk around in it!!!! Getting to be up close and personal with this ancient circus was really, really, really cool.

So of course, we had a pretend chariot race, with Miriam on my back in the carrier and Niko on Jesse's shoulders! (not the whole way around the track, because, HOT, but we went a little ways into the circus)

(Also, Jesse wins Dad of the Year award for running in the 90 degree heat with 45 lbs of sweaty Niko on his shoulders. Seriously.)

The kids loved the race and it really helped the space come alive for me. While we were running across the field, I thought to myself "This is one of those family memories I hope we always keep!" 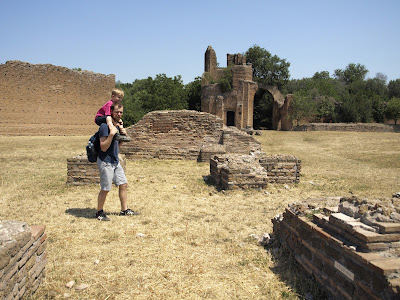 Standing in the starting gates, ready to race!

And really, it was so fun to stand in the starting gates and imagine the long-ago racers preparing their horses and chariots.

After the circus we walked over to the Tomb of Romulus, which Maxentius built for his son, who died young. 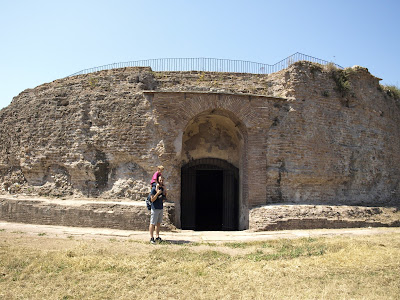 We got to go inside and look around (which creeped Niko out but thrilled the rest of us). There's not much to see now (except for some interesting architecture), but it seems like they're working on turning the space into a museum, which would be really great. 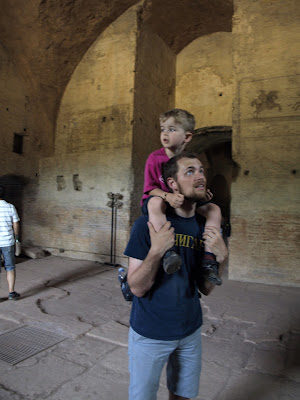 After the circus, we continued along the Appian way.

I have forgotten now what was interesting about this church, other than the fact that it is Very Old™. 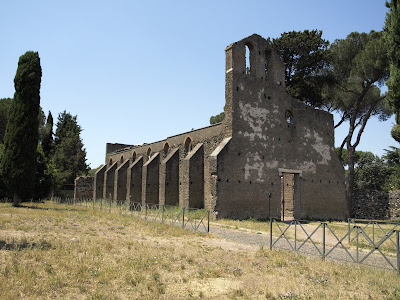 Further along the Appian way, you can see the original paving stones. 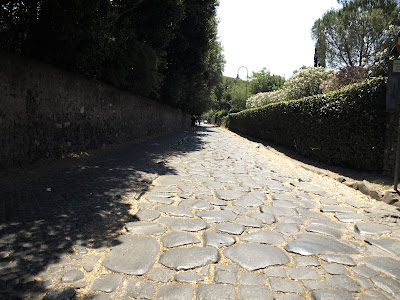 In all I think we only walked for about 1.5 miles of the Appian Way, though if the kids were older we'd have rented bikes and gone out much further. Maybe if our Trevi Fountain wishes come true and we are ever back in Rome, we'll do it!

After transit-ing back to the apartment (which took another hot and sweaty hour, but you know), we had lunch and rested up for the evening.

Our destination was Palazzo Altemps, a Renaissance-era palace turned museum. It was basically like having two museums in one! 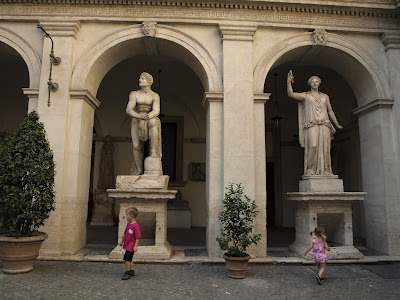 There were a lot of statues here, most of which had been restored. I'm not sure if this practice is controversial or not (it seems like most statues I see are broken and remain that way) but it was really cool to see the statues as they would have originally looked (without broken off noses or arms!)

It was also at this point that Jesse's endless storytelling to Niko really started to pay off. We began to be able to point at Hermes' winged hat or Dionysys' bunch of grapes or Athena's awesome armor and say "Look Niko, who could that be?" 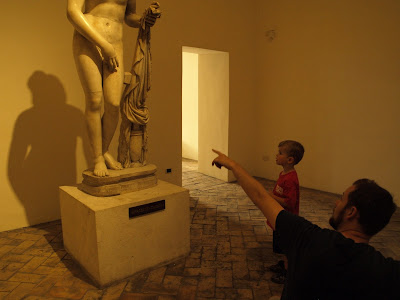 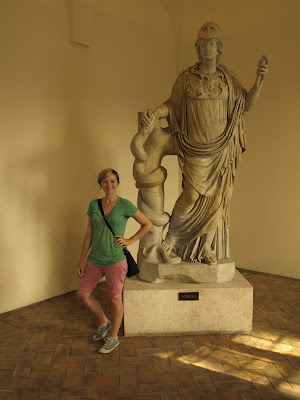 (ok, but Athena is really the coolest)

And because of Jesse's hard work, Niko really started to enjoy the museum, which was so awesome. 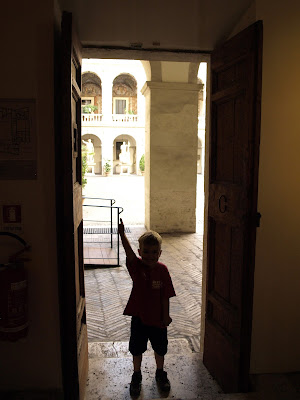 As for the palace aspects of the museum, it was so cool to see these stunning frescoes (on an outdoor patio!!) 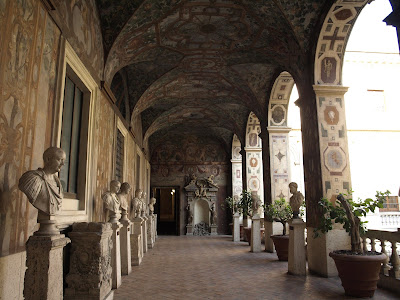 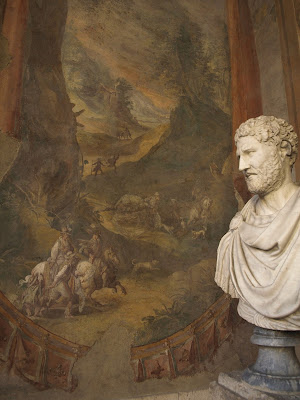 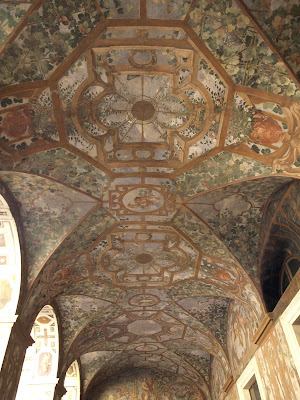 Niko even enjoyed looking at the artifacts! He asked a million questions and we gave as many answers as our knowledge and the museum's signage allowed. And when we found a display of ancient toys, it was so exciting to point them out to Niko and have them guess what they were. He liked it too! 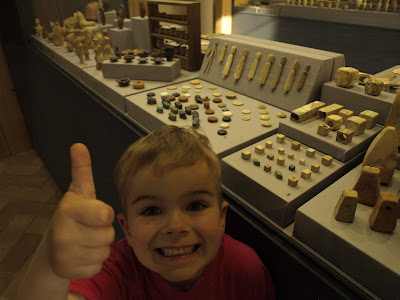 At this point in the museum, my fancy camera's memory card became full (ack! No!) but luckily we had space for a few final pictures of the coolest thing I've ever seen.

This bust of Pharaoh Amenemhet III dates back to the 19th century BC. Let me just let that settle in for a moment. 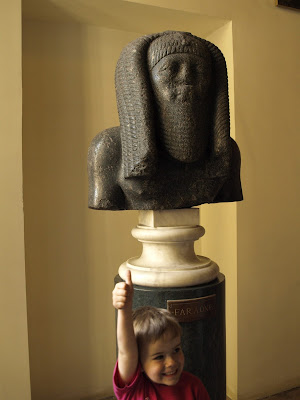 I mean, guys, this is the oldest thing I've ever seen. I mean, when the Coliseum was built, this statue was already as old to the Romans as the Coliseum is to us now!!!

It was also included in the Pantheon for some time (and you already know how I feel about the Pantheon), which only adds to its coolness. 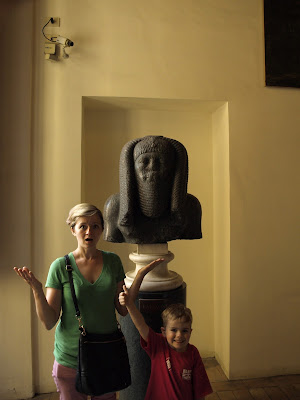 But really, this statue totally gave me the chills.

(ok am I officially a nerd because an ancient statue gives me the shivers? Or is that why I'm a librarian??)

After the kids' excellent museum behavior,* we decided it was only appropriate to treat them to some gelato.

*Let's be real though, we were going to get gelato either way.

We went to Come il Latte, which one blogger called the best gelato in Rome! 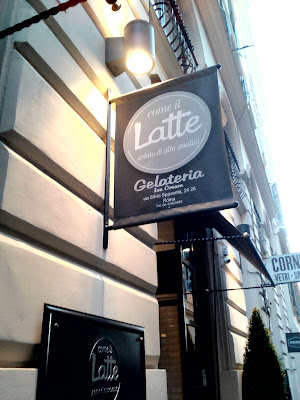 And really, it was extremely good. 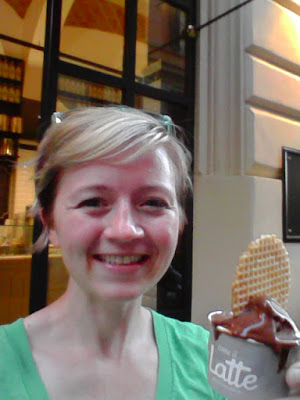 Maren said…
I love your sense of humor, have I ever told you that? Those are such fun adventures. The Appian Way sounds so interesting. I really want to go back to Rome and see more.
June 27, 2017 at 2:52 PM

ivrcti said…
I love how you combine silly fun with teaching your kids classical history! I'm so very, very proud!
June 27, 2017 at 8:12 PM

melissa said…
you look pretty cool next to athena! i didn't know anything about any of those places, and it sounds like you found some real gems of things to do and see.
June 28, 2017 at 12:42 PM