We arrived in Montreal around 6:30 pm and quickly found the apartment we'd be staying in for 2 nights.  Funny story: Weeks ago, I had booked us a hotel across town, after a long process of checking prices at different hotels on different travel sites, reading reviews, and trying to find a place that was more or less downtown (where we planned on spending the majority of our time). After a long while, I found a hotel that seemed to fit all our criteria: downtown, great price, free parking, and, I thought, good reviews. (Are you feeling a sense of foreboding yet?? You should be.) Well, a few days before our trip, for some reason I decided to check out the details of our hotel and ended up reading the reviews. Now, I always read the reviews anytime we travel. Always, always, always! But, I know I must have skipped the reviews for this hotel on accident, because I would have never booked this hotel had I read them!

So there I was, a few days before, reading about how the manager seemed drunk, would try to force his way into the room (mentioned  by not 1 but 2 or more sources!), how there were questionable characters hanging around the hotel, how there was someone howling (not an animal) in the hallway at 4 in the afternoon, and more. And I FREAKED OUT. Oh man, you guys, it was bad!

Immediately, I looked and found out I could cancel the reservation, cancelled it, and set about trying to find somewhere else to stay in the area. The trouble was, there was a reason I had picked that hotel: everything else was either too far away, too expensive, wanted an arm and a leg for parking (at least $20 a night in most places), or didn't have good reviews. So, I had gotten us out of that terrible hotel, but had nothing decent to replace it with. ACK!

A few days earlier, we had been hanging out with some friends that traveled to Egypt this summer, and they mentioned that had used airbnb (a website where people can rent out rooms or even the whole apartment to travelers) to find places to stay. After a long search, I found a place that finally seemed to fit our criteria--and best of all, it was a listing for the whole apartment (I wasn't big on the idea of just renting a room or two and sharing an apartment with the current tenants. Safety was a concern, sure, but I also just really like having my space at the end of the day).  This time, I made sure to read ALL of the reviews (the worst of which was someone mentioning that the apartment had run out of shampoo during their stay, and they'd had to buy their own--to which the apartment owner had responded and apologized profusely!). I messaged the owner half a dozen times, clarifying things I had questions about (where we could park, etc) and got good enough vibes from his responses that I felt comfortable booking the apartment. Also, I figured that the place was cheap enough that if we got there and it was totally creepy, we could always back out and not break the bank!

SO. We got into Montreal, felt very safe in the location and were pleased to find out that the owner was a totally normal grad student at Concordia university around the corner. 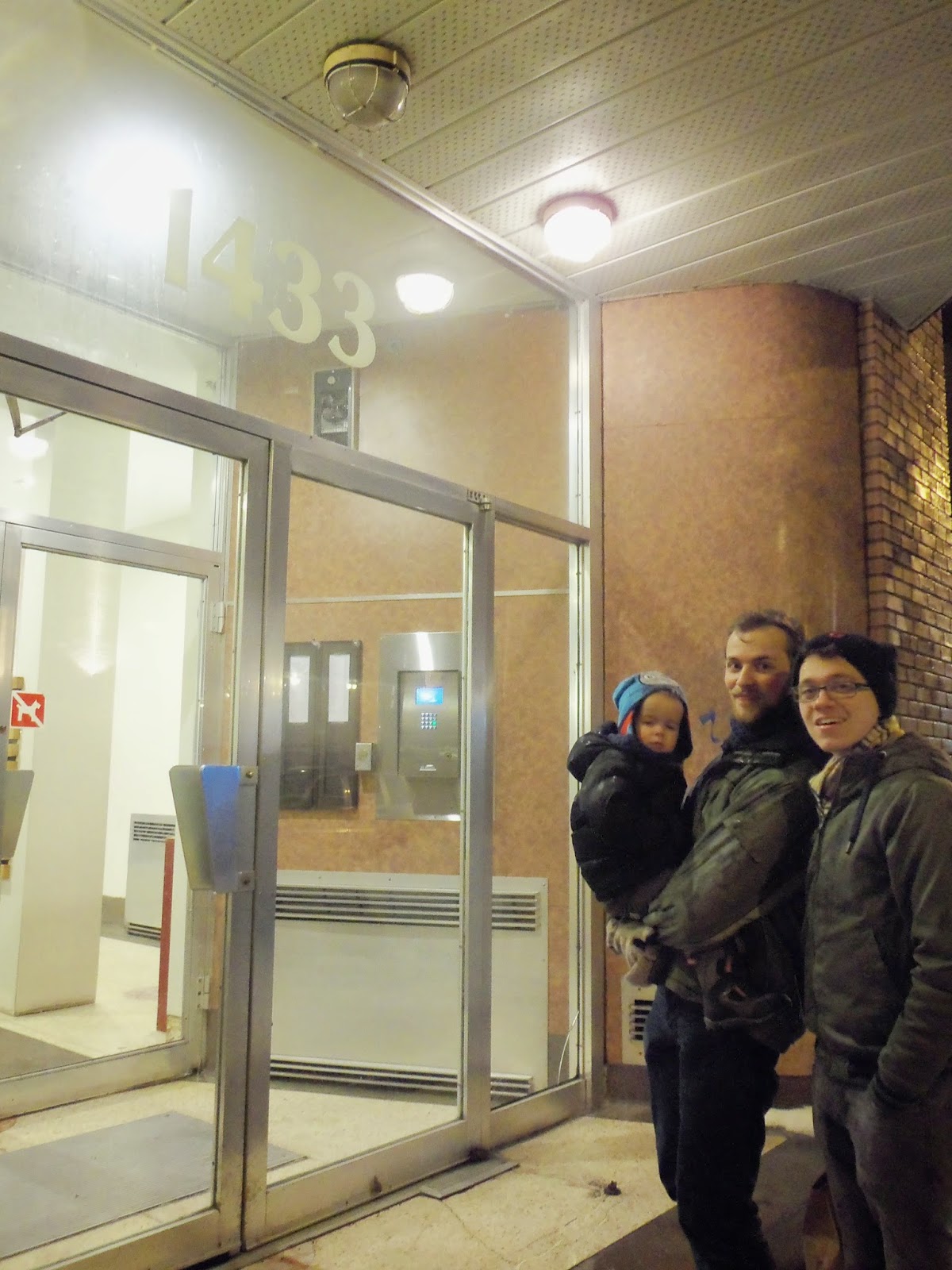 The apartment wasn't fancy, but we weren't paying very much for it so we didn't mind! It was very clean though, and had everything we needed (with the exception of internet that wasn't molasses slow, but that ended up being ok). 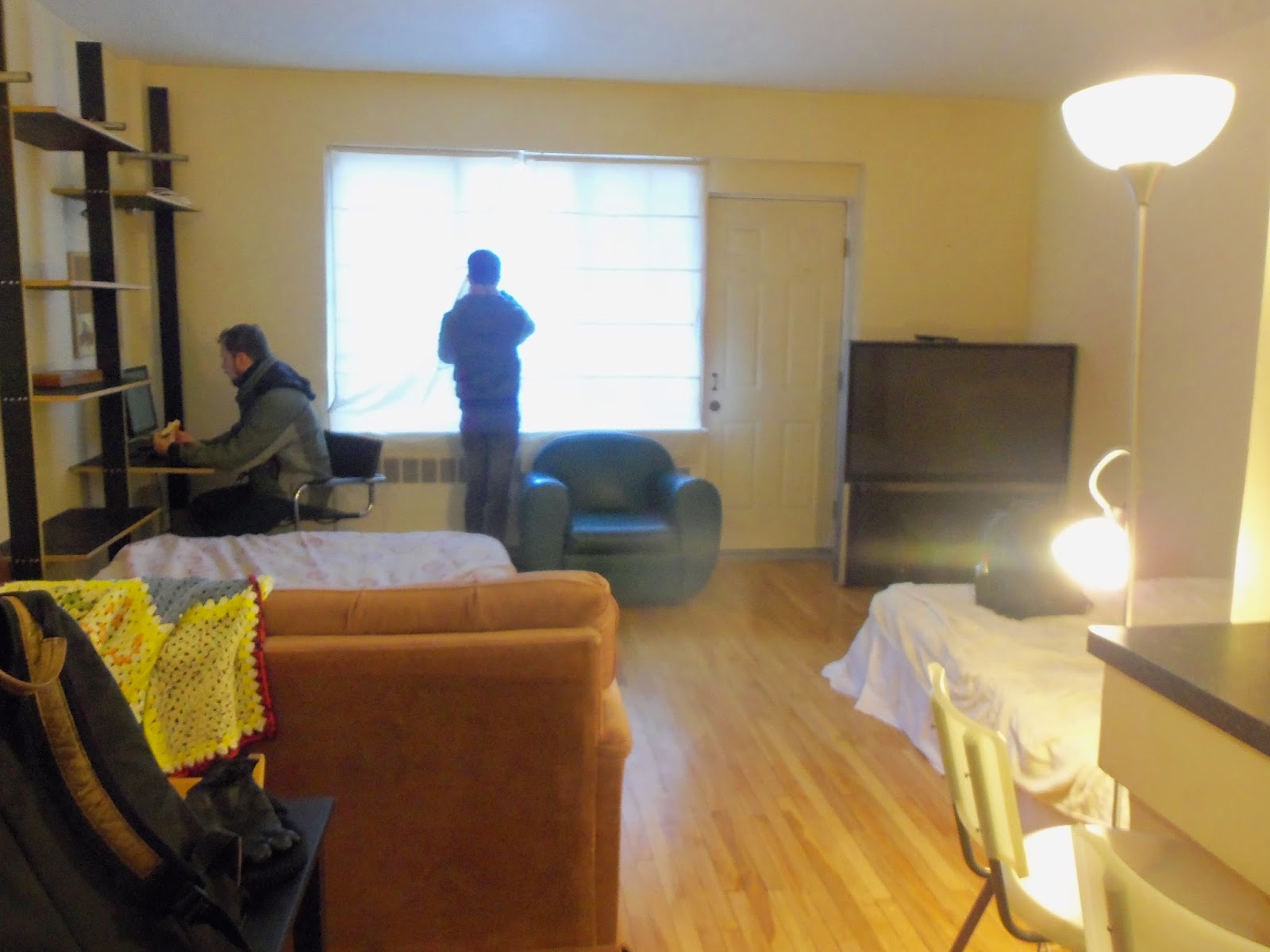 We settled in for the night (we were pretty bushed for the drive) and prepared to set out in the morning for the first day of our Montreal adventure!

And boy, was it an adventure!

The weather that day was juuuust a little too warm, so that all the precipitation we got was technically liquid, but would turn to ice on our clothes and the sidewalks. It was, admittedly, pretty miserable walking around outside, so we tried to do that as little as possible!

We had some difficulty getting on the metro at first (our debit/credit cards don't have special chips in them like Canadian cards do, so the ticket machines and ATMs didn't want to recognize them), but after a long, fairly complex process (including walking back to the car, digging it out of the snow, driving around until we found a bank that was open, eventually parking again and then walking to the Metro again) we finally got tickets and were able to get around :)

I think this was the first time that Nikolai's ever ridden a train (with the exception of a tram in the Denver airport last year) and he was so excited! Seriously, I loved watching his face when he saw it pull up for the first time--it was fantastic :) :) 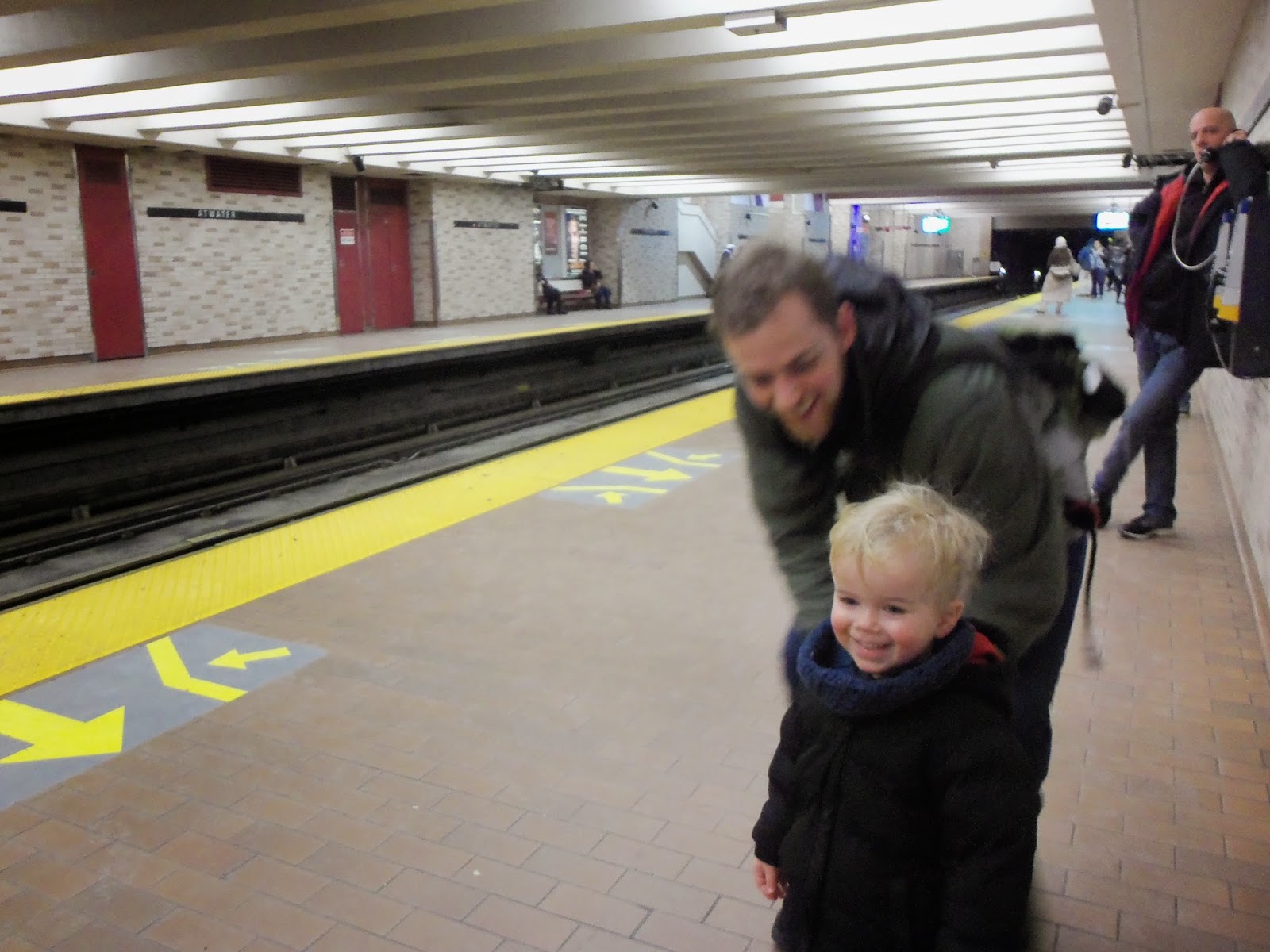 Also, just to let you know what it looked like when we were walking around--behold, Montreal in all of its wintry glory: 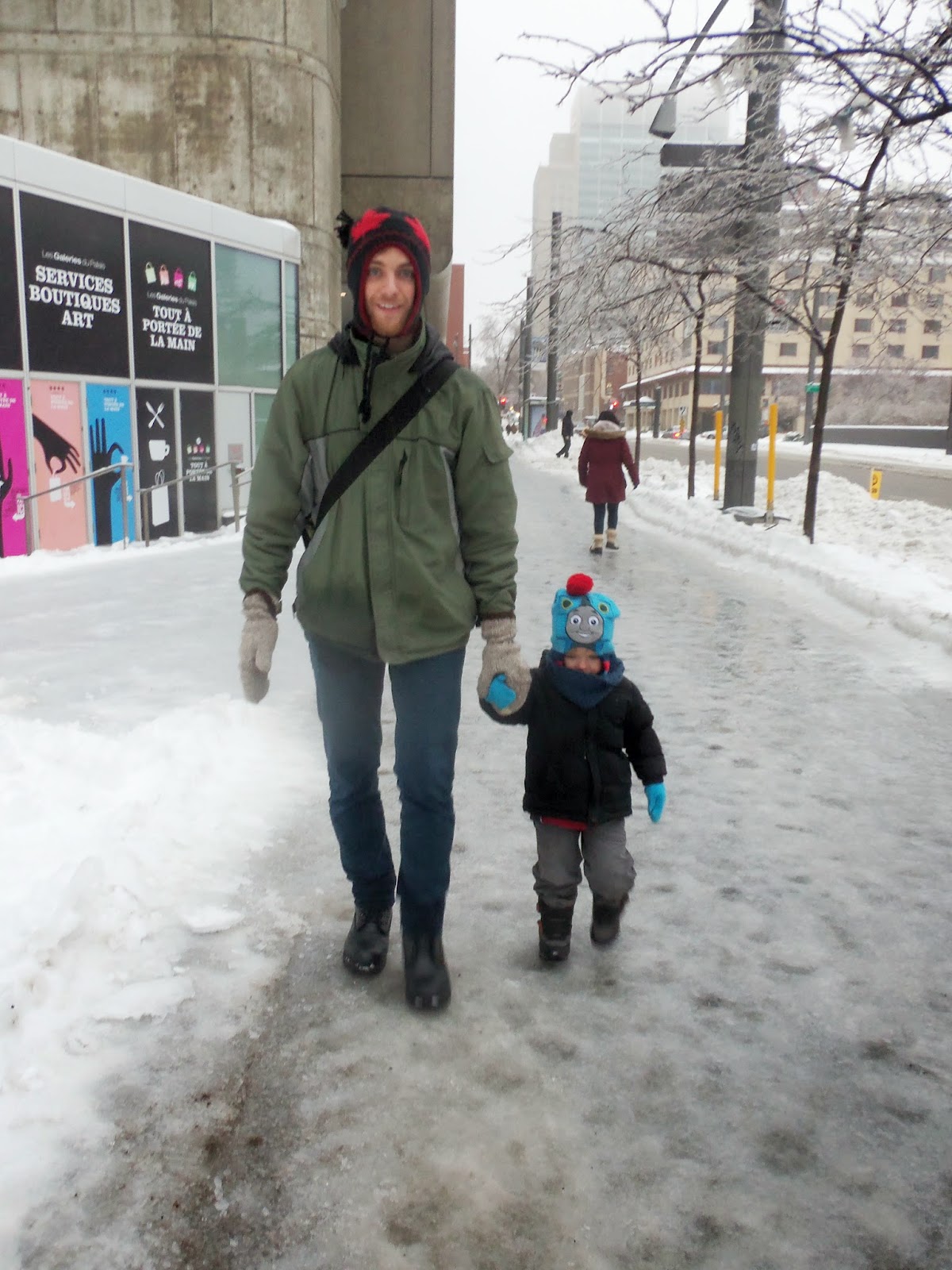 Our first stop was the Notre-Dame Basilica. Aaron actually got to go to mass (we dropped him off so at least someone could enjoy the morning while we tried to figure out the metro system!) which was apparently amazing (there was a choir and a massive, 7,000 pipe organ!) and we caught up to him afterwards to get a look inside. 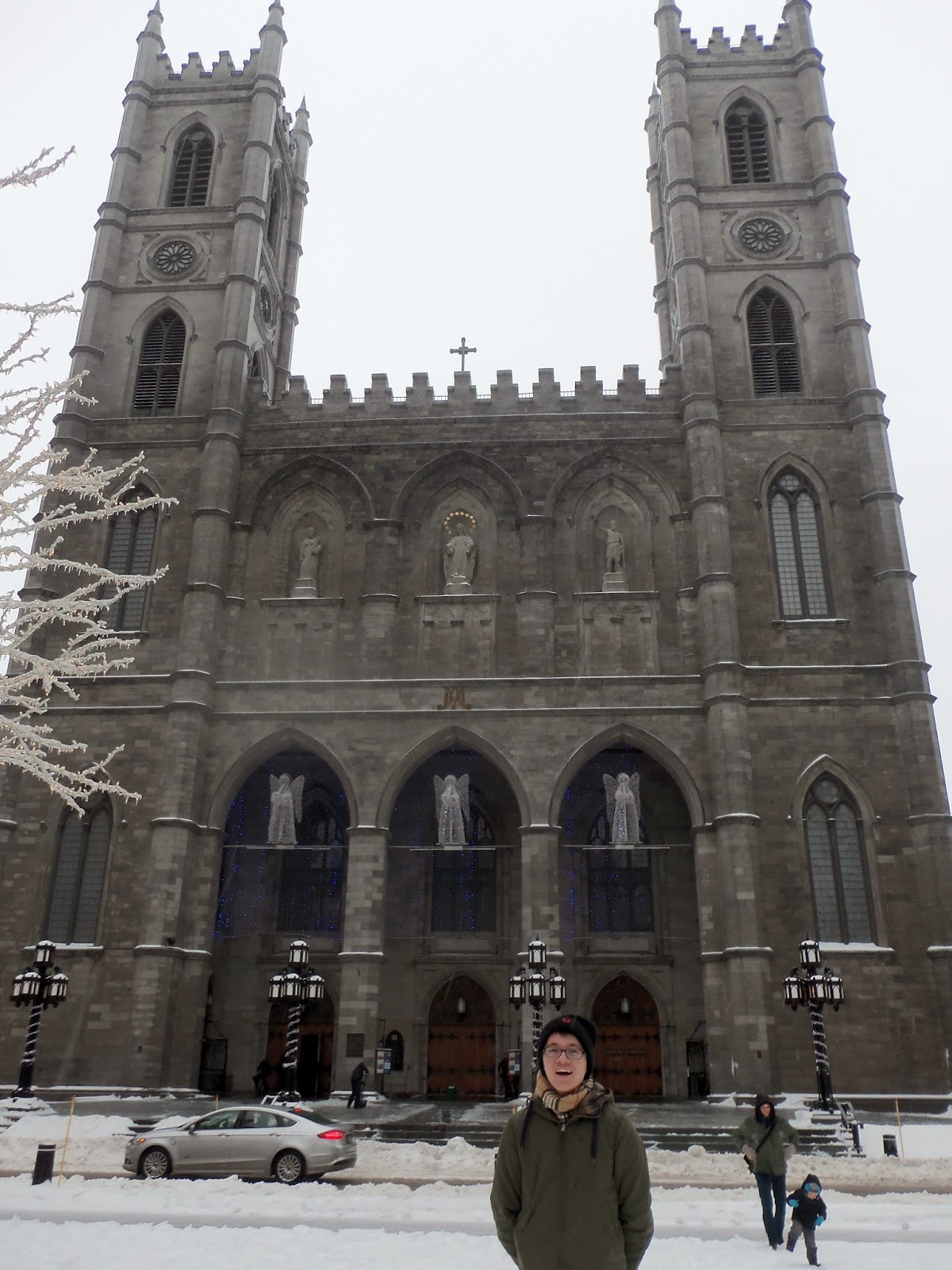 This place was beautiful! Sadly, I had left my fancy camera in the car on accident so all I have is some semi-blurry ones taken with my little camera, and they totally don't do it justice. 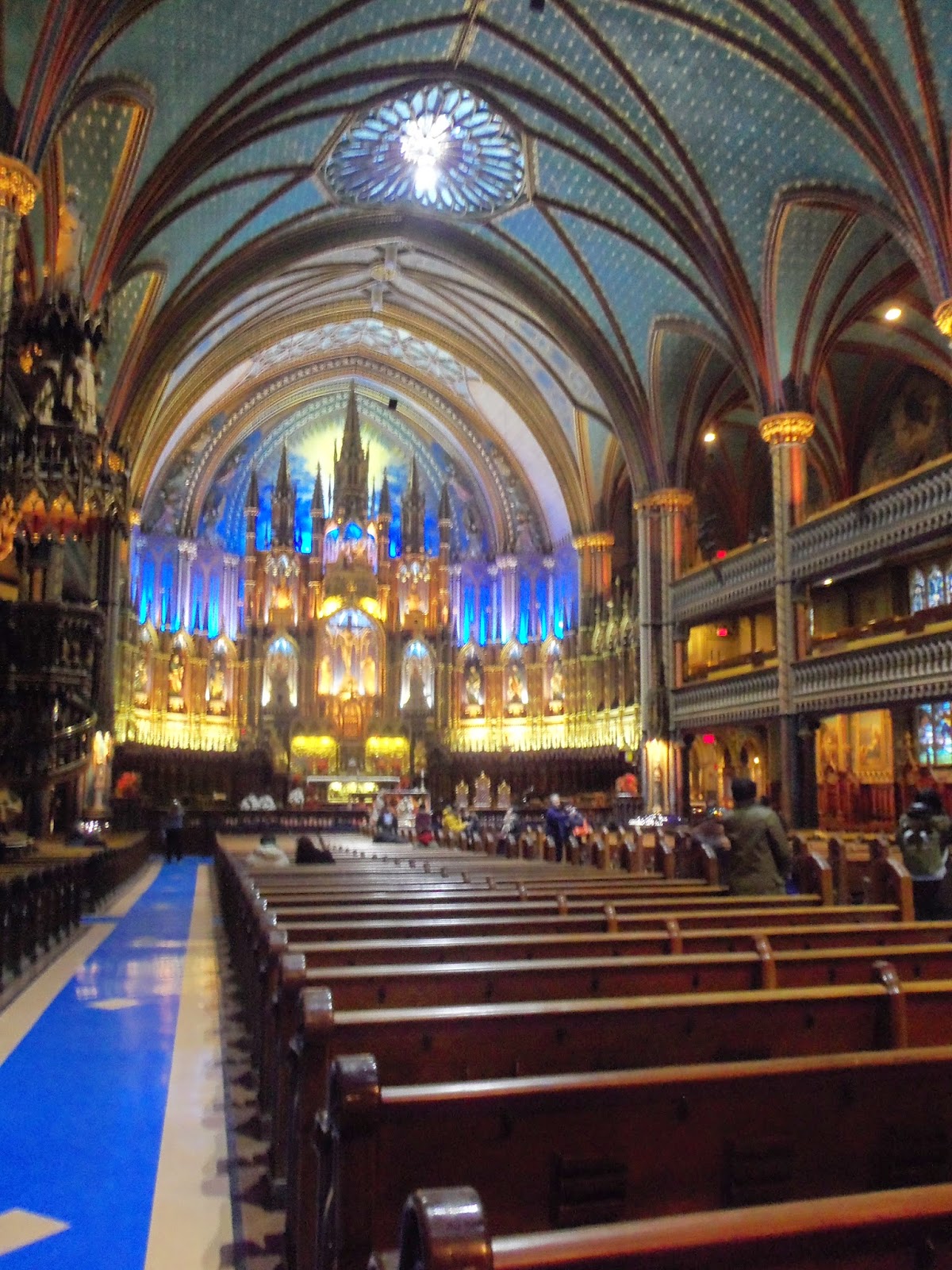 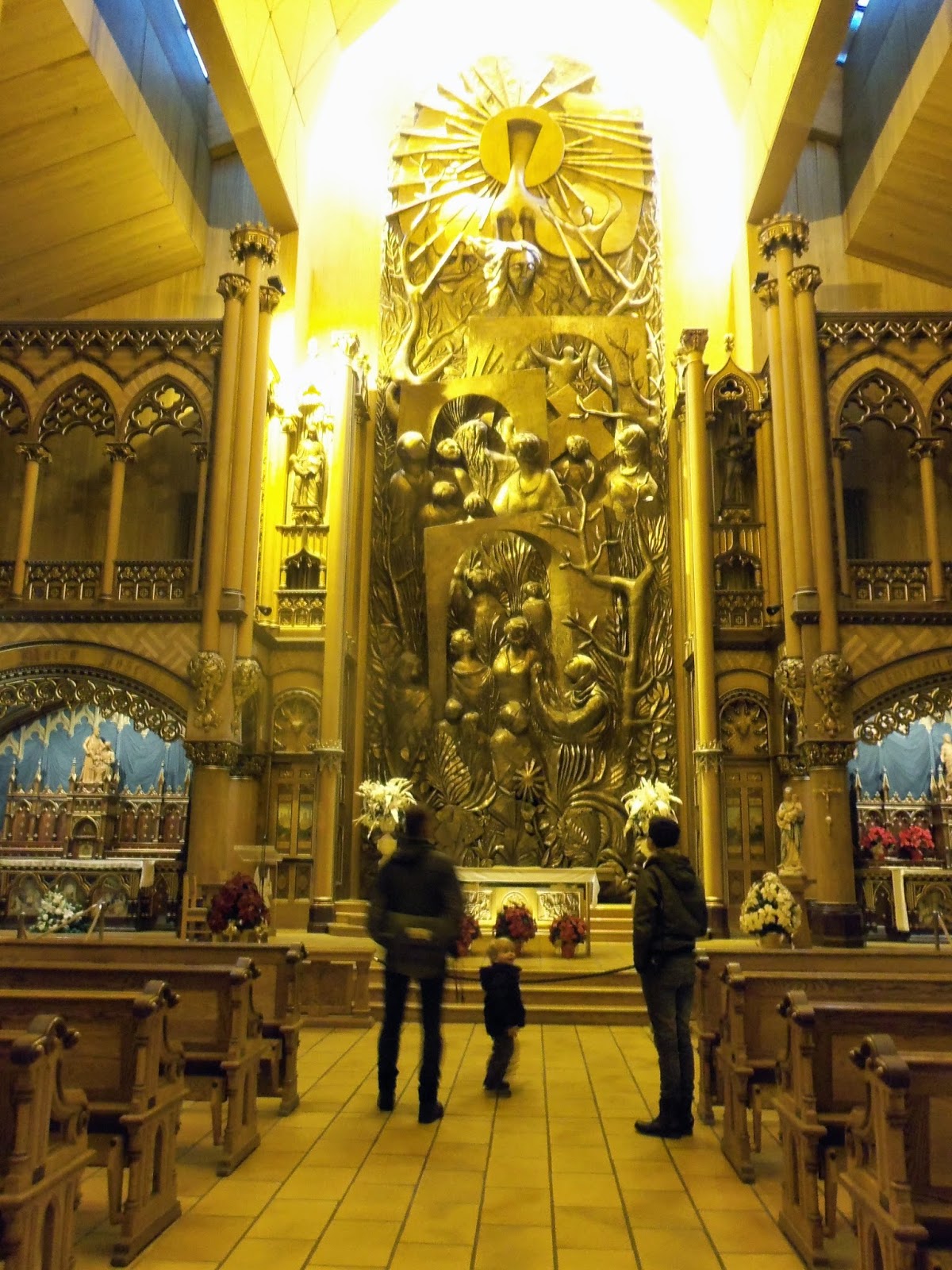 Suffice it to say, it was really lovely and we were so glad we got to stop by!


Next, we found a super empty mall (are you shocked to know that no one was shopping on such an icy morning?) where we could sit indoors and eat a picnic lunch (yay for cheap travel tricks!) someplace where there wasn't slush falling on us from the sky ;) 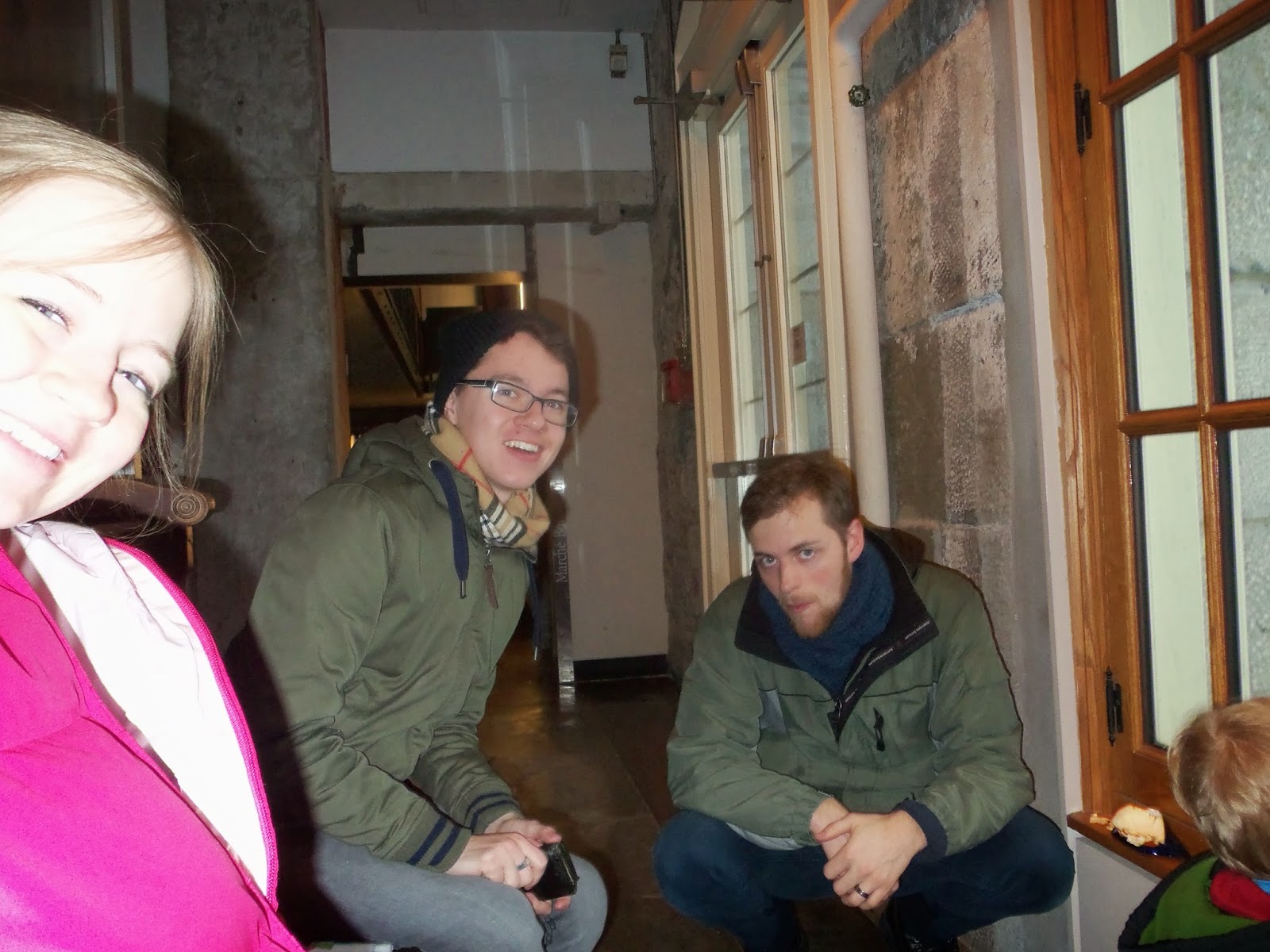 After that break, we walked back to the metro and headed north a ways, to the old Olympic Stadium complex (from the 1976 summer Olympics in Montreal).  Below is a picture of the stadium, as well as the Olympic Tower. It's a testament to the terrible weather that day, though, because you can't even see the top for the cloud cover!! 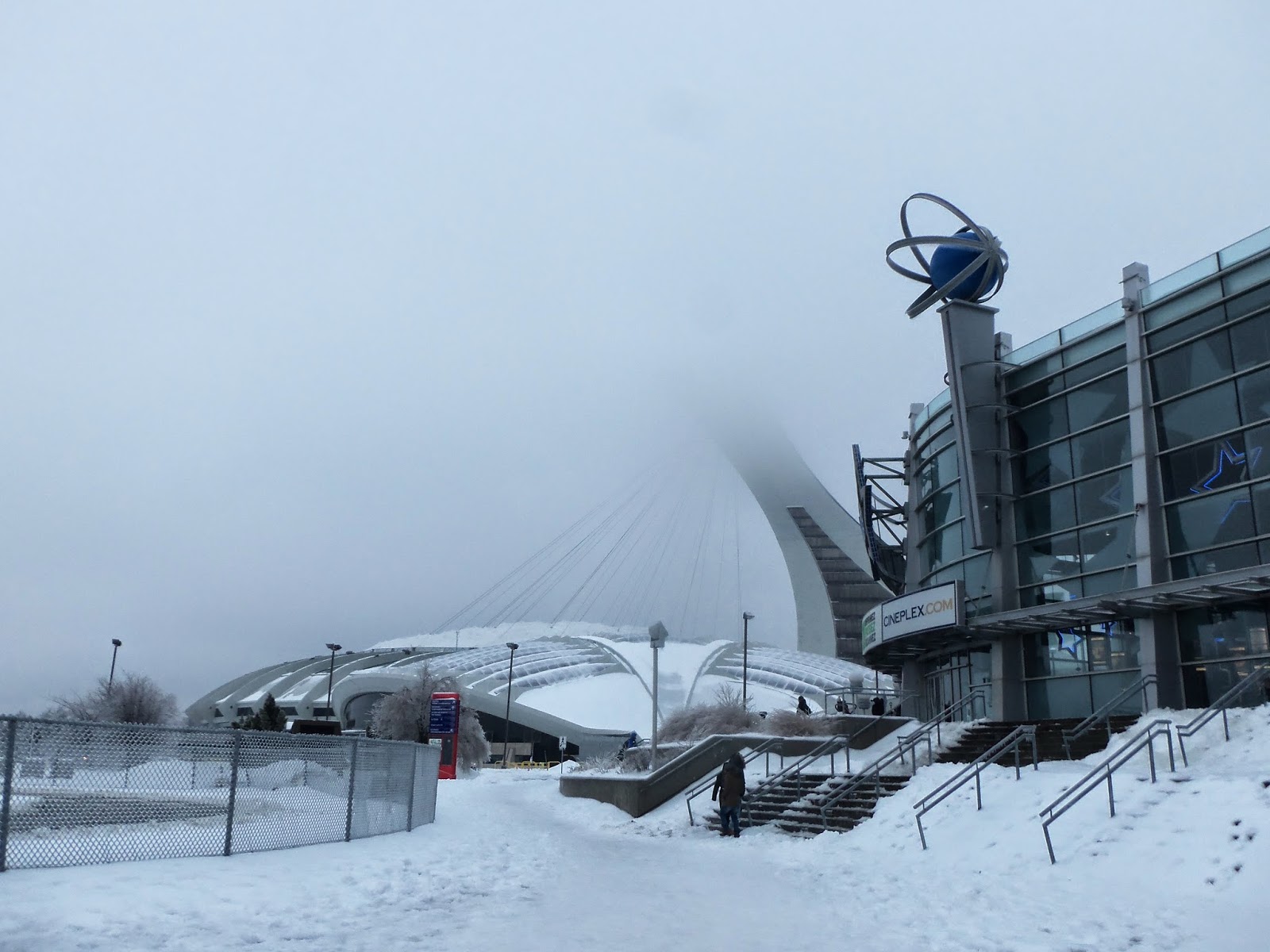 We visited the Biodome, located along with several other attractions in the stadium complex. It was a magical place--it has 4 ecosystems found in the Americas (Tropical forest, north american forest, Gulf of St. Lawrence Ecosystem and Arctic/Antarctic), with all sorts of flora and fauna from each of those places. It was so cool to look around and see not just a few animals represented, but living plants and smaller organisms (such as anemone under water in the bay, etc) that are also part of those habitats.

Nikolai was kind of tired (it was his nap time, and he had been walking around all morning!) but he really enjoyed it all the same. 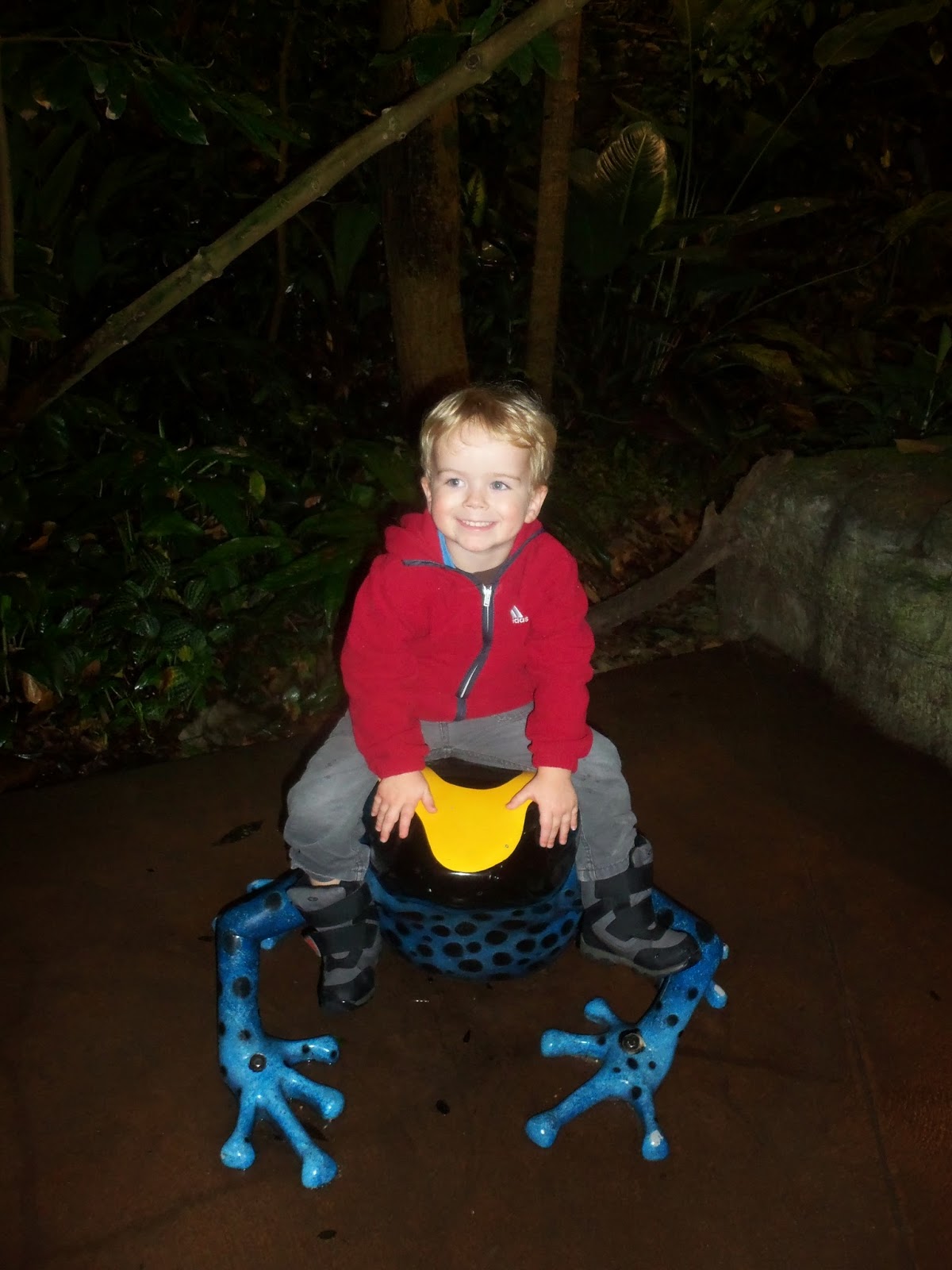 He climbed on this frog all by himself, and got off immediately after I had taken a picture. What a ham! 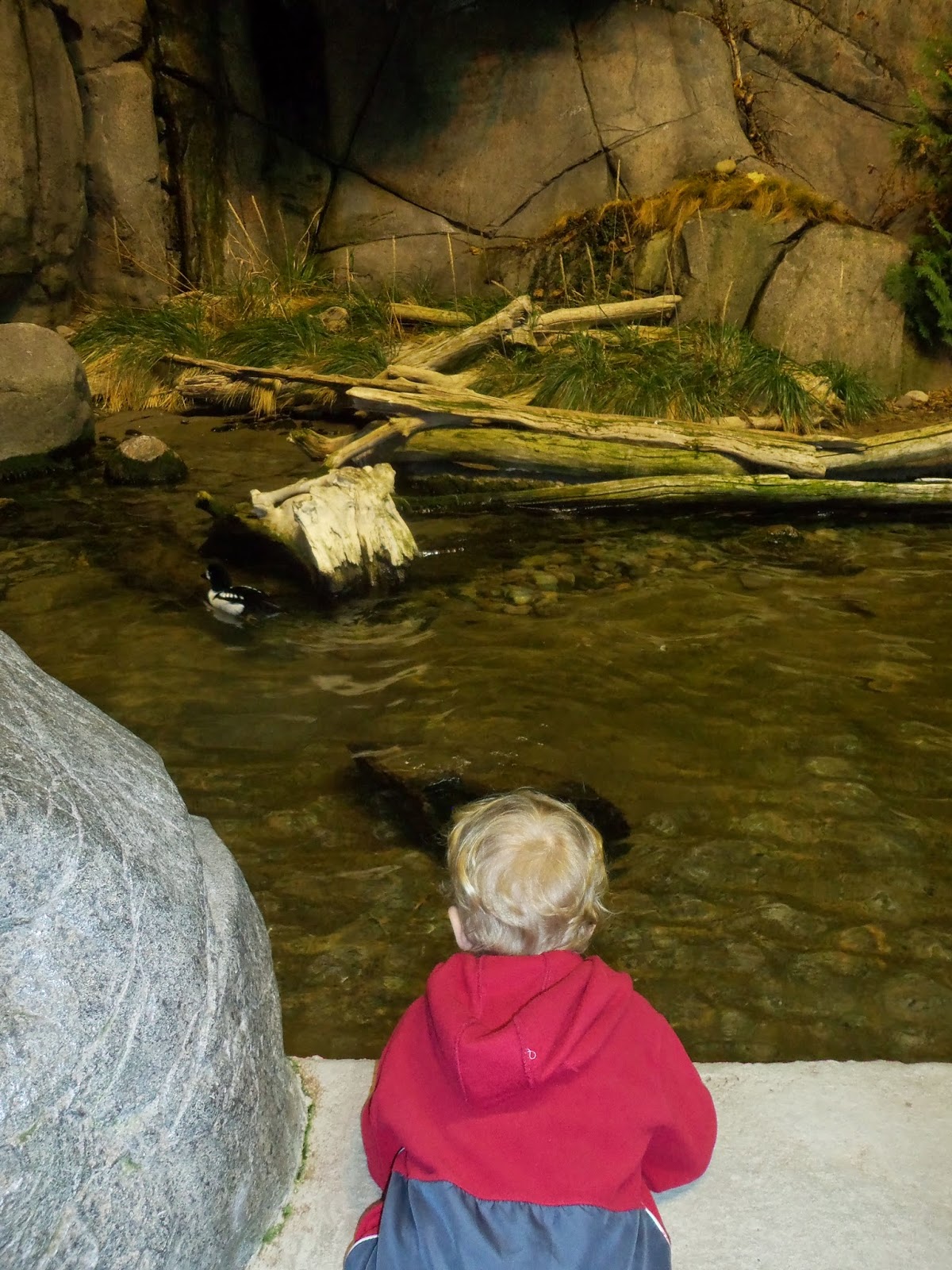 Looking at some ducks. Also, this was a segment of the Bay of Lawrence habitat, and as such this little inlet had salt water and mock waves lapping the shore. It was lovely! 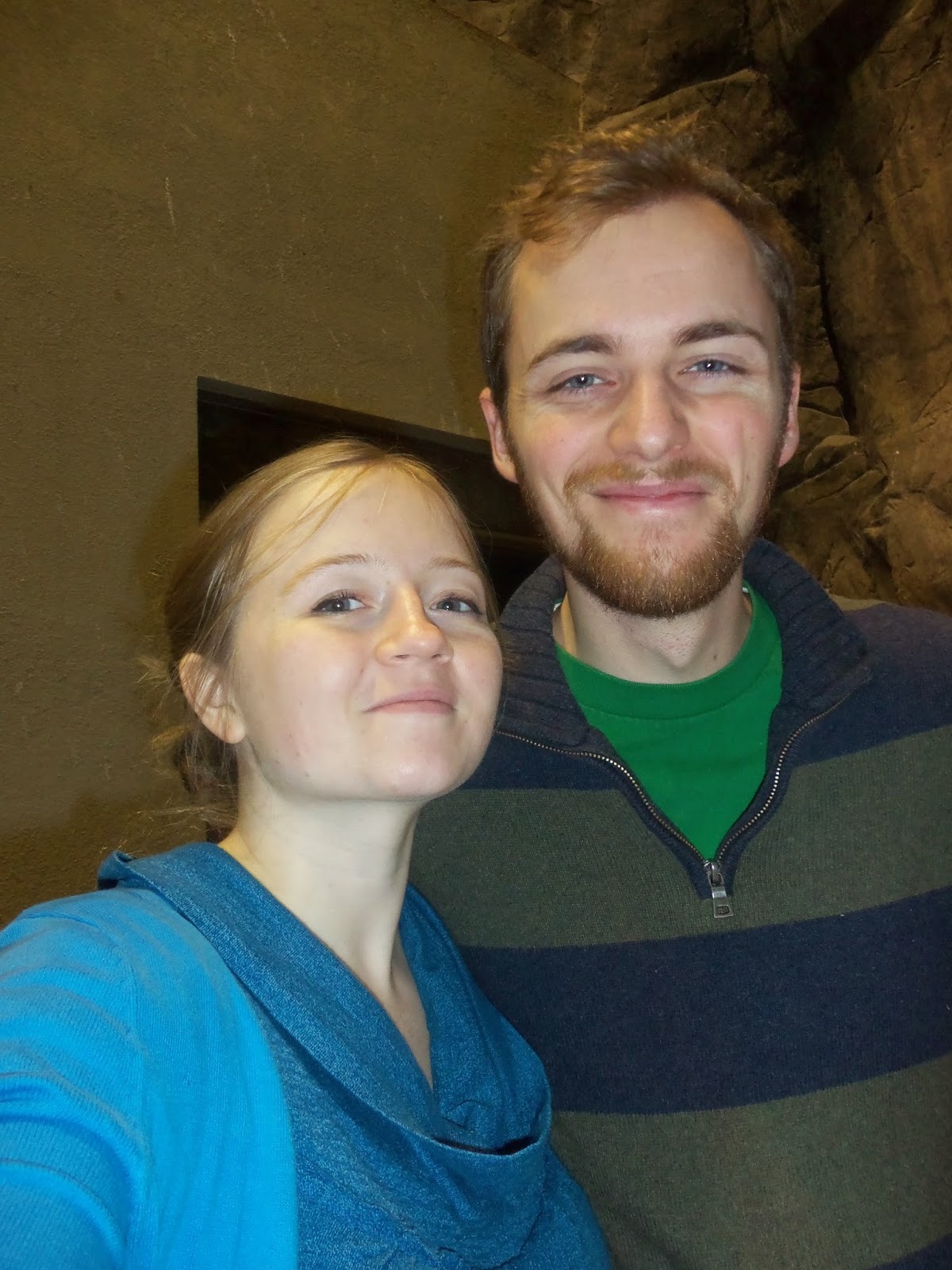 We liked it too! 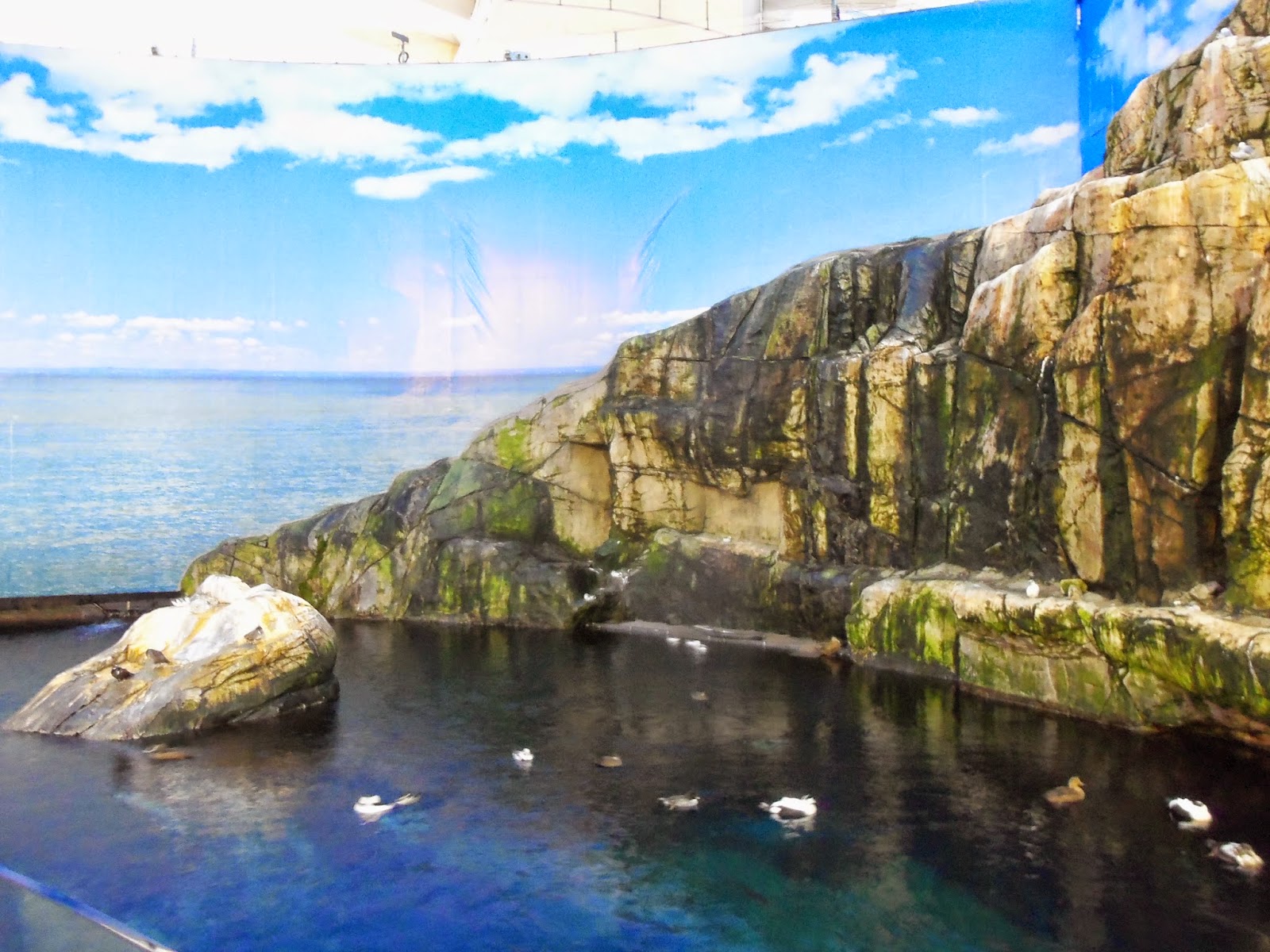 Above was a representation of further out in the bay, so they had big rocks for water birds to climb on, a lovely painted backdrop of what the bay looks like, and deeper water (and around the corner, you could even see some giant fish swimming in the deeper water! It was awesome!). This part of the exhibit was definitely my favorite! 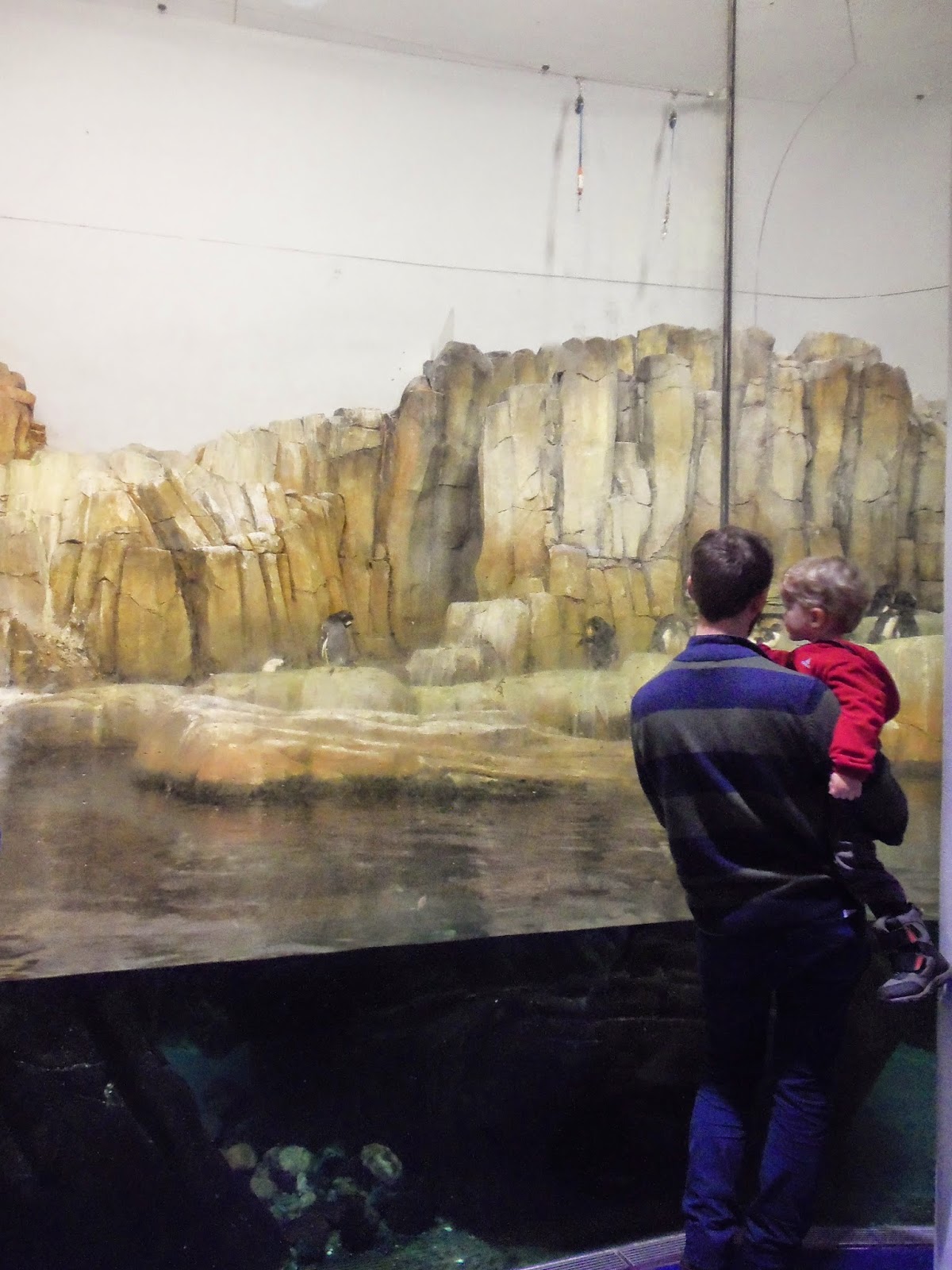 Nikolai liked the penguins, but was a little too tired at that point to fully appreciate their cuteness, I think ;) 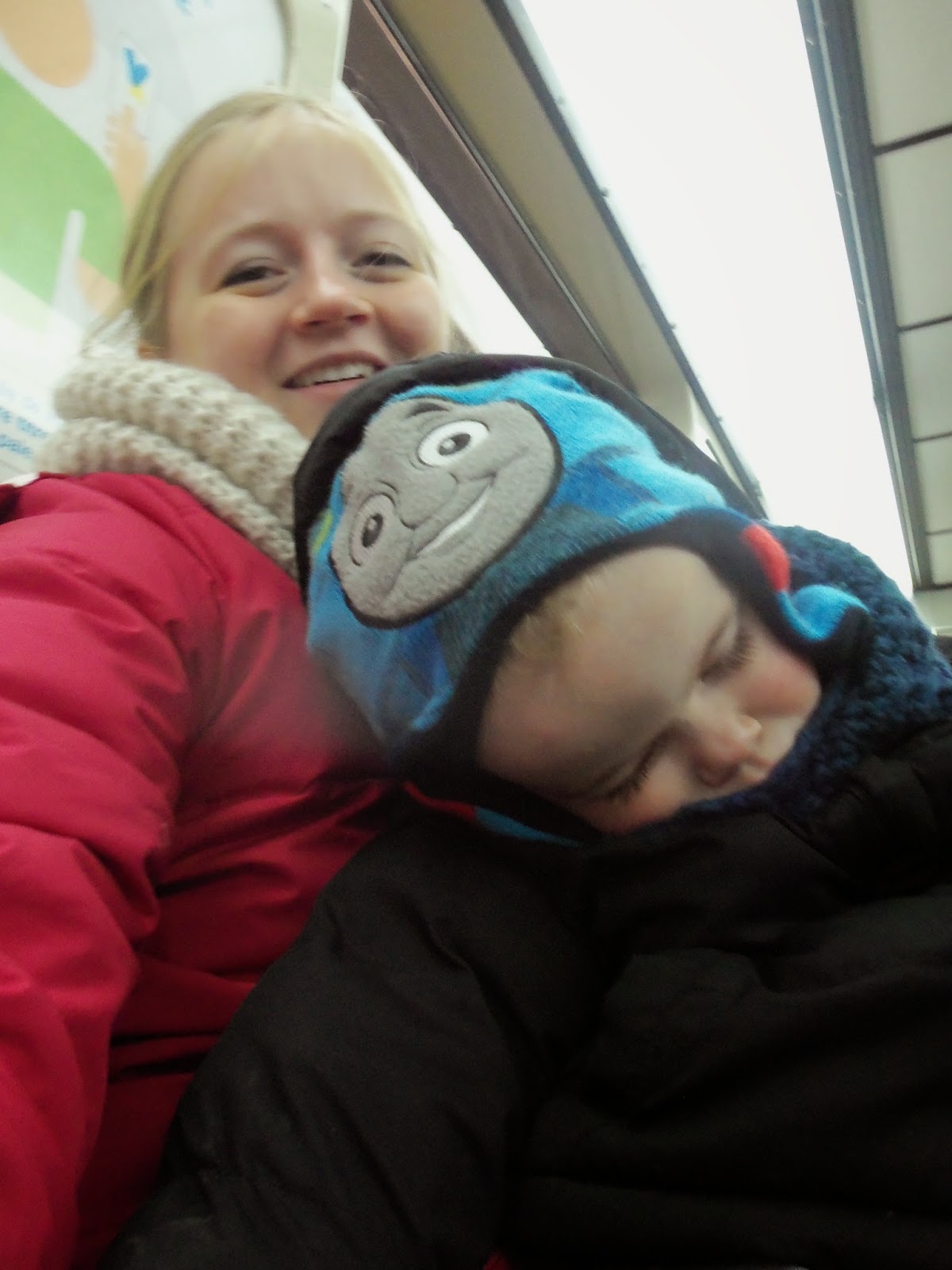 Our little tot was so bushed that he fell asleep on the metro ride home! He was awake one minute and asleep the next. Also, I think this was the first time I've gotten to hold him while he was sleeping in at least a year!

For dinner, we found a fantastic lebanese restaurant called Boustan, which was both cheap, had hearty portions and was delicious! 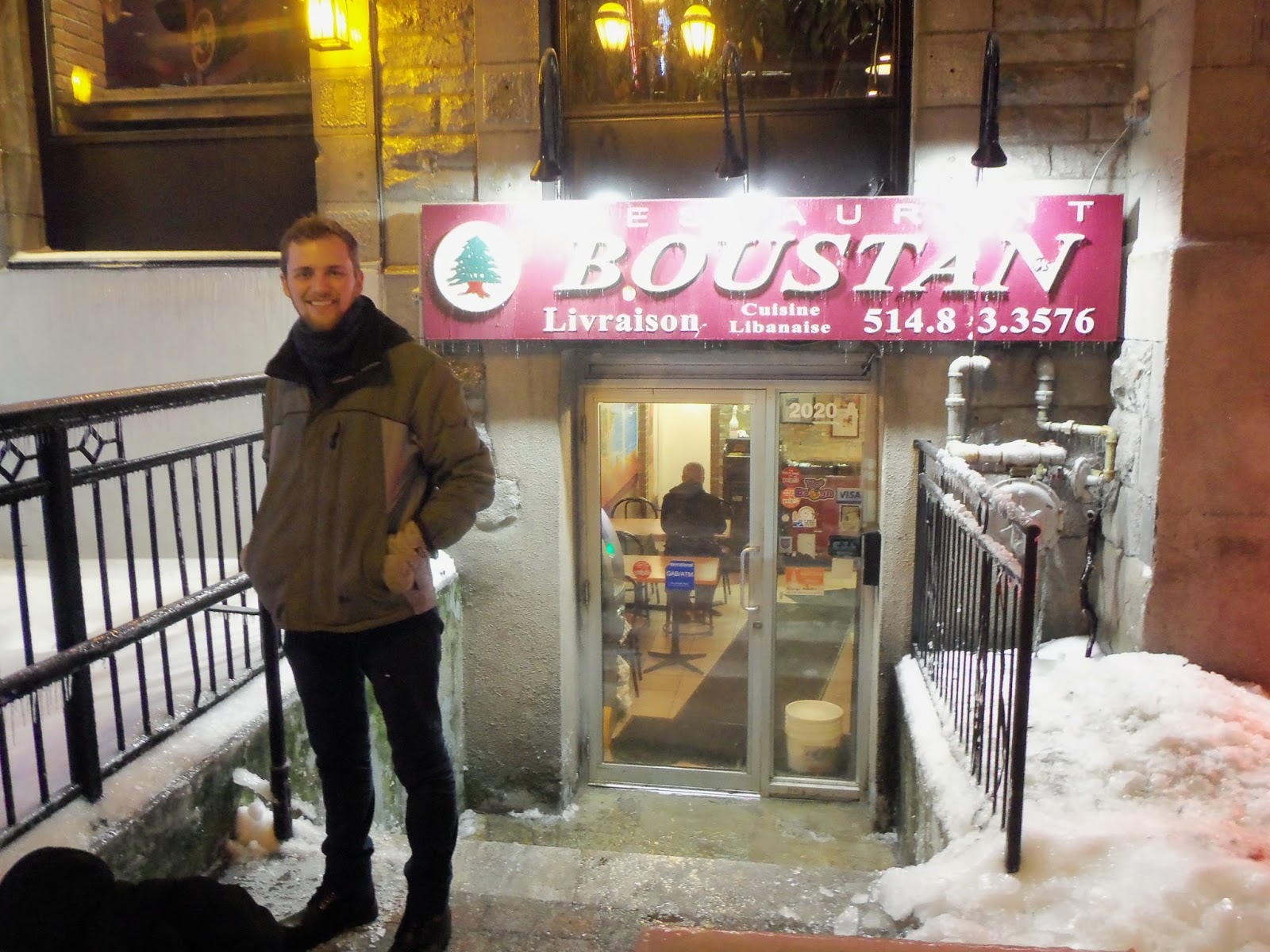 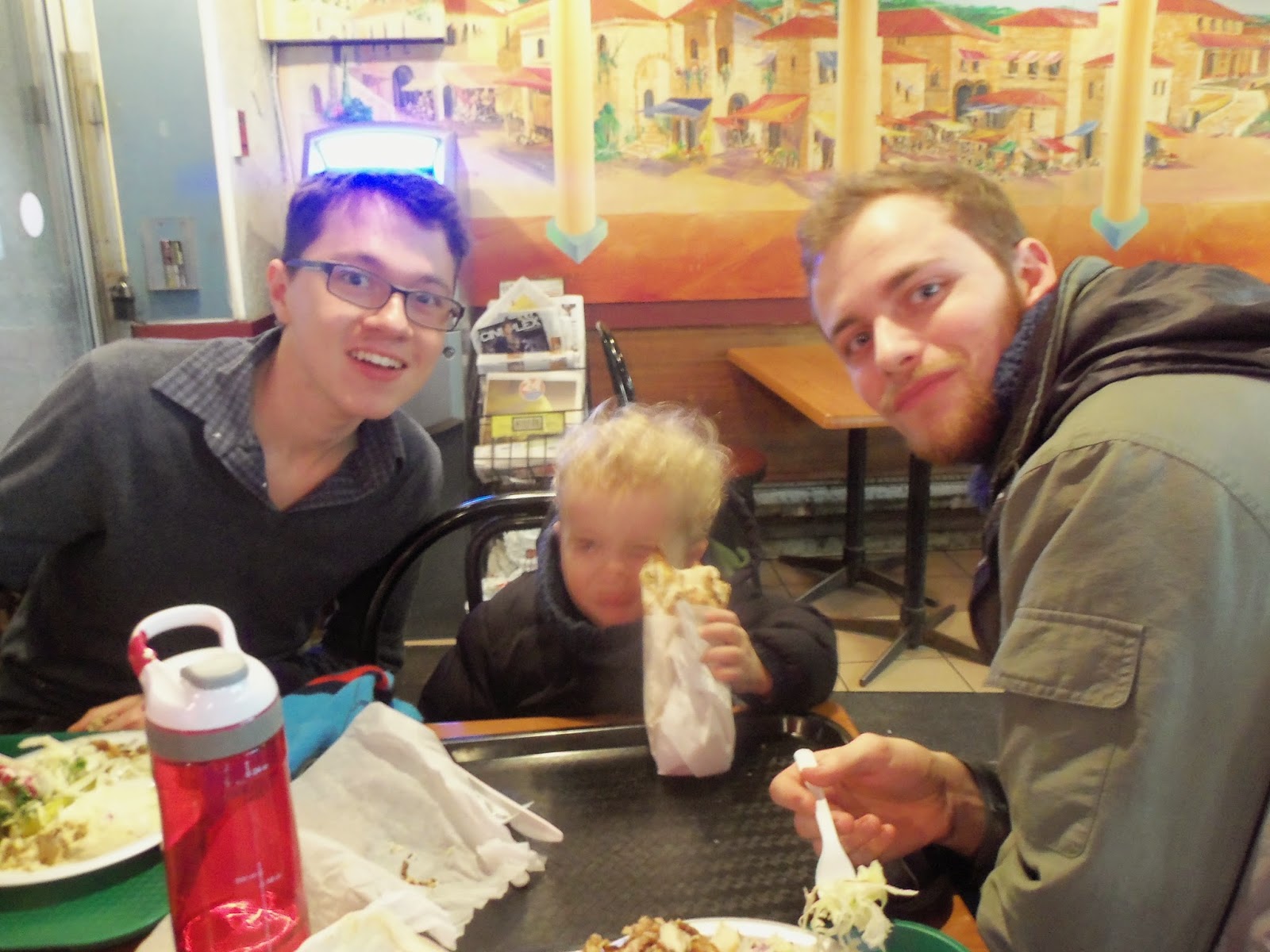 Terribly blurry picture of Niko, I know! But I wanted proof that we were there! 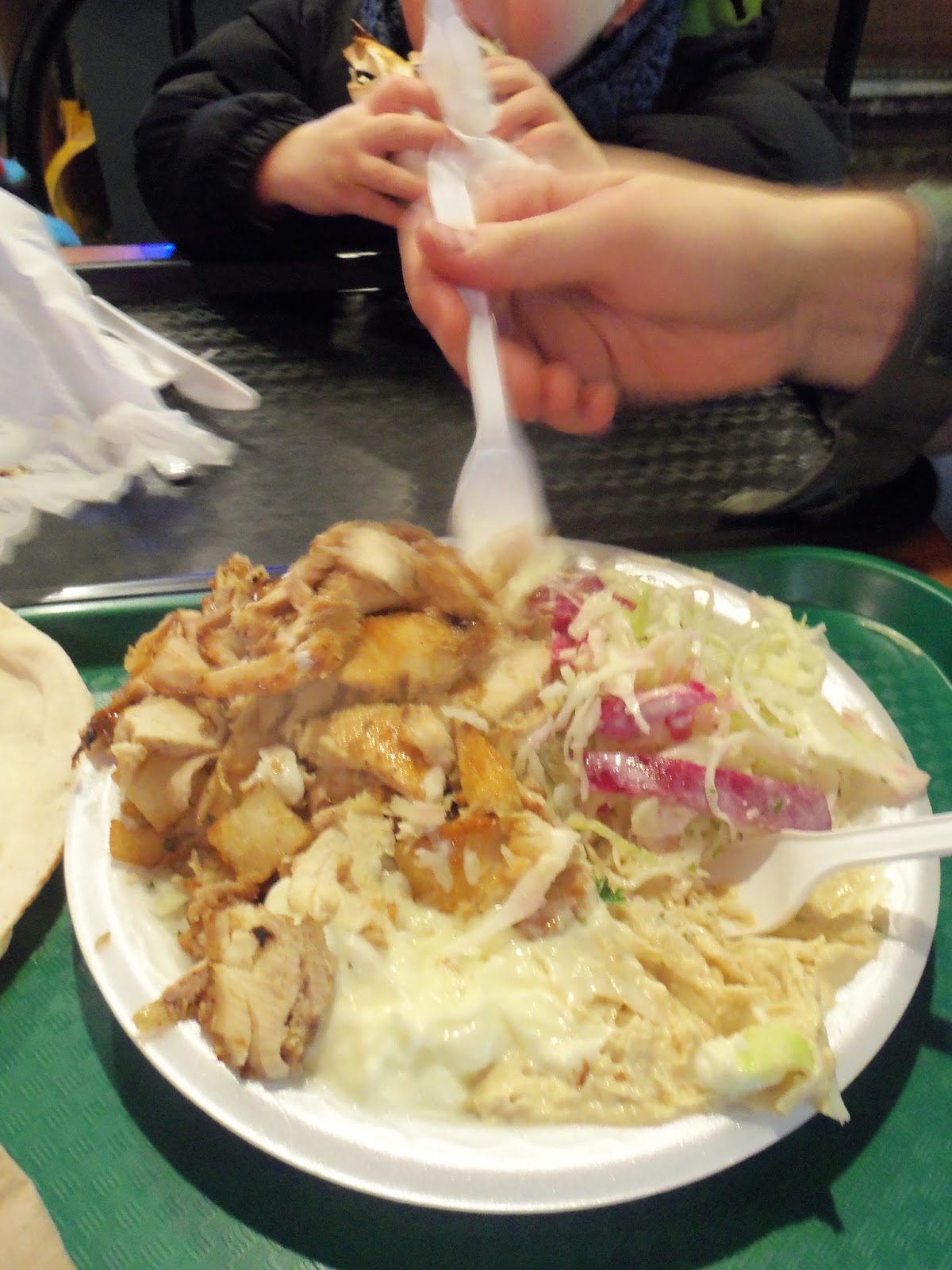 This picture doesn't do it justice, but this was an amazing chicken schwarma plate that was SO GOOD.  I know the odds aren't good, but if you're ever in Montreal and even remotely like this kind of food, you should really stop here!

The next day was the opposite, weather-wise: too cold (0 degrees!), so I sent Jesse and Aaron to check out McGill (the university Aaron wanted to see) and I stayed home and packed with Nikolai while they tried to see everything they could see before they froze :)

It was a good visit, and then it was time to go! Before leaving, we drove up to Mount Royal to get a good view of the city, sans cloud cover: 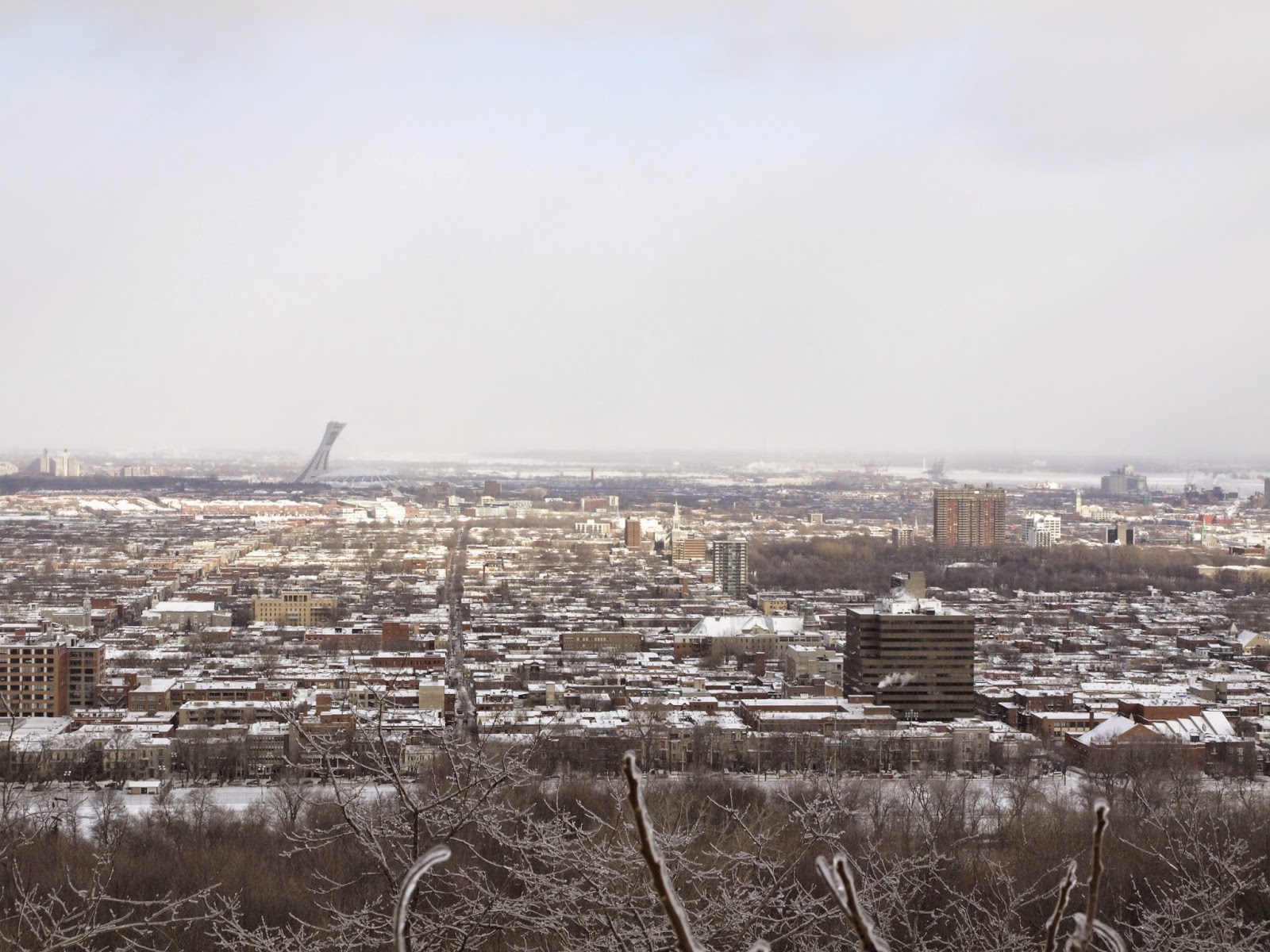 And then we set off for Toronto! Stay tuned for tomorrow's post about the last leg of our trip!

Maren said…
I don't know if you guys are more brave or crazy! We had a fun time with a hotel in Montreal too. It was the right price but it felt almost abandoned and it was literally a time capsule from the 80s and 90s. It was out of the city on an island or something. We had trouble with metro tickets too. Luckily we were able to use US dollars pretty much everywhere. Mont Royal was so pretty. Nikolai looks so cute. :)
January 12, 2015 at 3:14 PM

julis said…
I love that even though you are pregnant and have a toddler, you are totally up for adventure! You are my hero.
January 12, 2015 at 7:26 PM